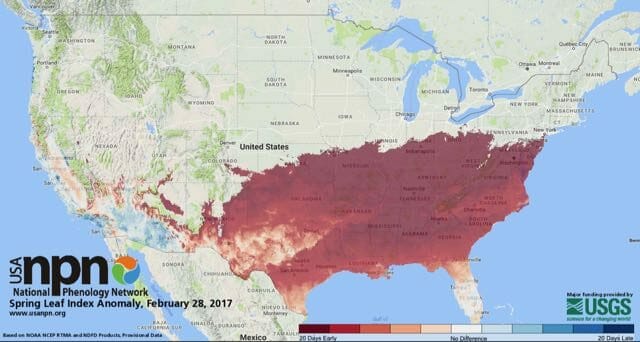 WE OFTEN SAY, “Spring is so early this year,” reacting to some plant or animal behavior or just the weather–but is it really? A place to get perspective: the USA National Phenology Network, which in late February noted that yes indeed, spring was early—two to three weeks early—in almost the entire Southeast, the data reveals.

You can read that article, or see the current state of the season depicted in two interactive maps: one (above) particularly showing how this spring’s arrival stacks up against other years, and another (below) that tracks the progress of spring onset as it occurs up the nation. (You can also access both clickable maps, with explanations of what they reveal.) 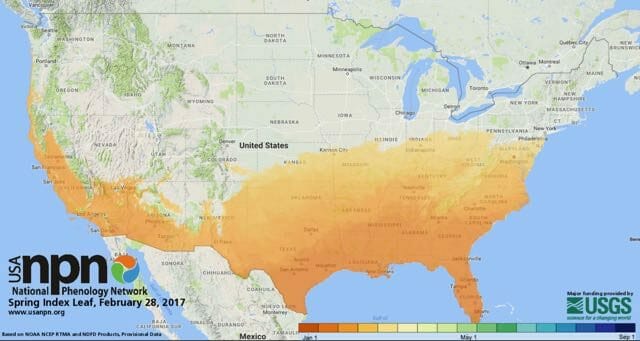 Called “nature’s clock,” or “nature’s calendar,” phenology is the study of recurring life-cycle stages among plants and animals, and of their timing and relationships with weather and climate. (I’ve written about it before, in this interview with a Cary Institute scientist.) Using observations from amateur and professional naturalists alike, scientists can gain a better understanding of an entire ecosystem’s intimate interactions–providing a critical view into the effects of a changing climate.

The USA National Phenology Network’s goal is to get 2.5 million such data points in 2017, and each of us (or whole garden clubs, school groups or other entities) can help by joining the network’s Nature’s Notebook project.

The Network’s activities are funded by such organizations as U.S. Geological Survey, U.S. Fish & Wildlife Service, National Park Service, The University of Arizona and the National Science Foundation.

IT’S ALL CONNECTED OUTDOORS, and the science of phenology can help us understand exactly how. Called “nature’s clock,” or “nature’s calendar,” phenology is the study..
Read More
p
April 3, 2011
34 Comments

WHICH CALENDAR DO YOU FOLLOW to time your seed-sowing or other garden chores? The one on the wall or desk, or the one provided by..
Read More
i
May 5, 2014
12 Comments

I KEEP WANTING TO GRIPE: Spring is “so late,” and the weather “isn’t cooperating,” I say, as if it’s all meant to be in service..
Read More