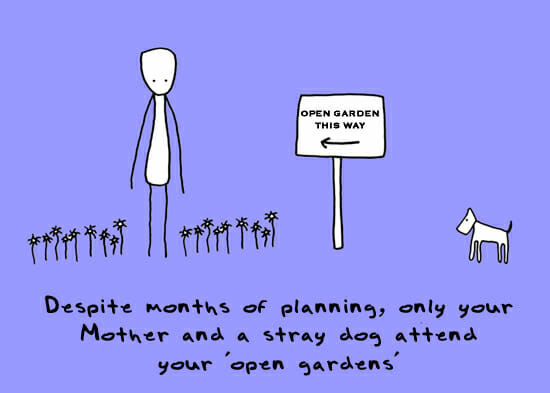 UH-OH. WHAT IF WE GET THE GARDEN ALL DRESSED UP, and then nobody shows? Tours of (disclaimer) The Garden After the Flood are next scheduled for Saturday, August 22, 10 AM to 4 PM, during Copake Falls Day (that would be my town’s second annual shindig). Look for details on their site; find the village, just off Route 22 In Columbia County, New York, and they will point you here. Or ask Andre. He seems to have a read on how it’s all going to go. Damn.

Tags
andre jordanMargaret Roach
Radio Podcasts
a way to garden podcast
Margaret's weekly public-radio show, from Robin Hood Radio in Sharon, CT, the smallest NPR station in the nation. Listen live at 8:30 AM EDT Mondays, to the replay Saturday morning, or stream the podcast anytime. LISTEN OR SUBSCRIBE FREE: Get the iTunes version; find it on the Stitcher app; or on Spotify, or your favorite podcast app. Browse past interviews below.
Podcast Archive

doodle by andre: deserted for a trophy can!

KICKED TO THE CURB; washed up and left for dead; deserted for a sexier model, all shiny and curvaceous and dressed in pink. However you..
Read More
d
March 24, 2015
4 Comments

doodle by andre: portrait of a marriage

doodle by andre: sunnyside up, or deep fried?

ITHINK MUCH OF THE NATION WILL IDENTIFY with this week’s exhausted utterance from our beloved Andre Jordan, one of millions of Americans who have been..
Read More