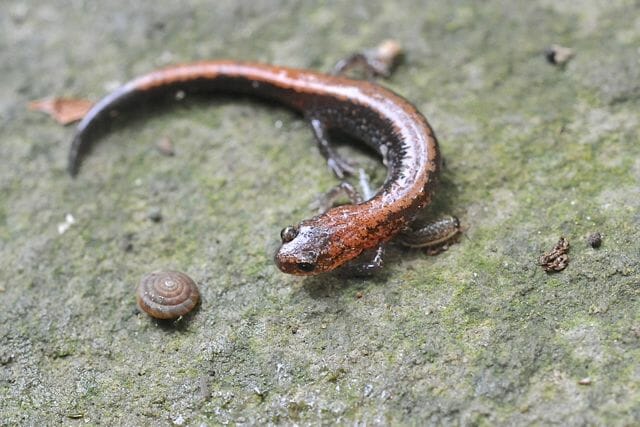 IF I WERE FEELING VERY CREATIVE I’d write a children’s book: “The Salamander and the Snail.” It would be about an encounter and subsequent relationship between two living creatures I interrupted when moving a big pot next to my doorway, during garden cleanup. But rather than write that just now, how about I share some of the fascinating facts about the Eastern Red-Backed Salamander, Plethodon cinereus, a lungless, long-lived little creature who doesn’t have an aquatic stage like other salamanders and most amphibians?

That’s what I have learned so far from the University of Michigan Museum of Zoology’s Animal Diversity Web, another of my favorite hunting grounds for information about the natural world’s creatures. Their portrait of the Eastern Red-Backed Salamander explains that this species respires through its moist skin–meaning dry times are hard times–and cannot tolerate extreme acid conditions (such as a pH of about 3.7 or lower).

No wonder these slender little salamanders are always tucked in under my pots, since they are a favorite food of various mammals, snakes and even some birds. Hideouts! Everybody has to eat something, so as for what they eat themselves: Snails are on the diet, apparently (along with various insects, mites and spiders, worms, millipedes and more), so I wonder how long the new relationship depicted above in my photo would have lasted.

“They forage by thrusting out their tongue in a quick, forward motion and capturing the prey,” the Animal Diversity Web portrait says. I guess I should have kept watching the two of them a little longer. 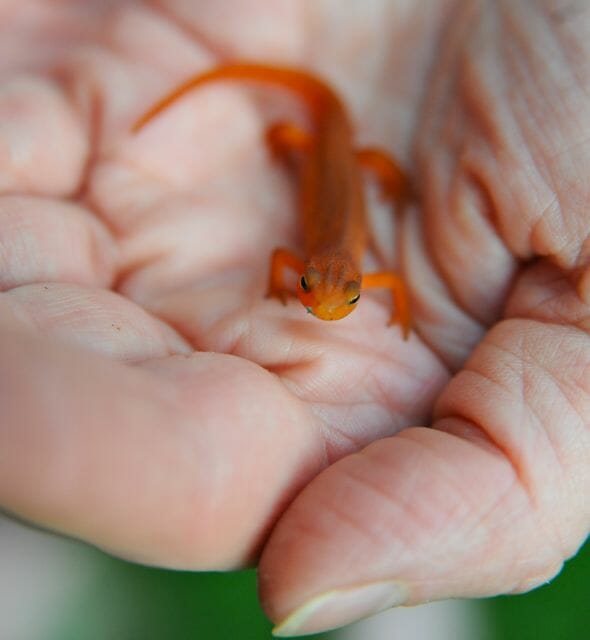 DON’T TELL THE FROGS–my favorite amphibians–but I have friends among the salamanders, too, and not just red-backed ones (who by the way are said to perhaps live a decade or twice that if they get lucky and stay off the predators’ dinner buffet). The Eastern Spotted, Ambystoma maculatum (below) uses my backyard water gardens for laying eggs, and I am happily surrounded by the Eastern Newt (or Red Spotted salamander, Notophthalmus viridescens), especially individuals in the the red eft stage of life–the terrestrial life phase–who appear in the garden after every rainstorm (like the one above, in my hands; photo by Erica Berger). At other times of life, they live in the little pools out back with all their amphibian cousins who grace me with their presence. 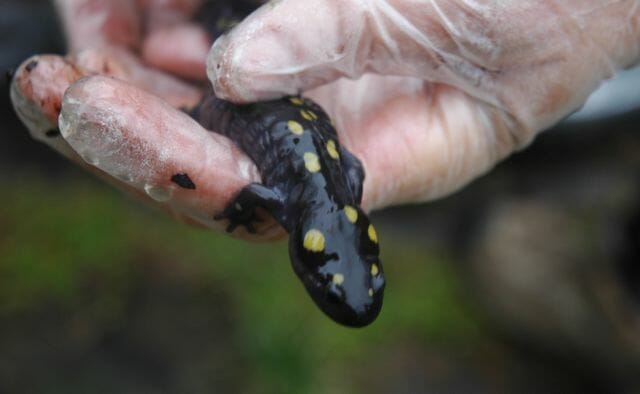 THE STATE AMPHIBIAN of South Carolina was waiting in the backyard water garden for me today, or maybe for a lover more to his taste...
Read More
t
May 29, 2008
6 Comments

these newts are made for walkin’

REMEMBER IN APRIL, when I inadvertently fished an Eastern Spotted Salamander out of one garden pool while cleaning it? He/she hasn’t been heard from since,..
Read More
b
September 22, 2008
30 Comments

bookends to a great gardening season

WE OPENED THE SEASON HERE WITH A SALAMANDER, whom I’d fished from the little pool out back while mucking out debris.  Trusty garden helper and..
Read More