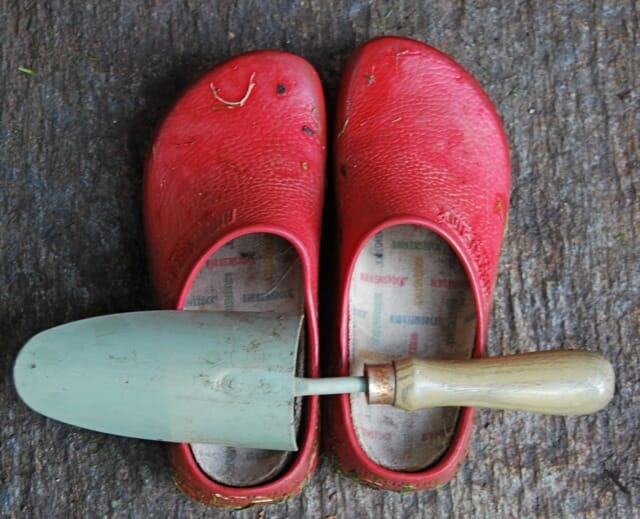 I SAT NEARLY PARALYZED yesterday, trying to sort a design problem as the day slipped away without inspiration’s arrival. I’ve felt vaguely this way for days, frankly. It wasn’t until this morning that I remembered I always get like this at this time of the season, starting sometimes in mid- or late June and reaching a crescendo by the time July arrives, and that I’ve written about it before. Reading this essay from my archive helped:

I GIVE UP. ENOUGH IS ENOUGH. I’ve had it.

These are the kind of phrases, tired but true, on my mind by sundown each of these days, when latest spring has slipped into the reality of summer, after eight or ten hours spent trying to solve the puzzle I started in the dirt some years ago.

Where do all the plants go to make a pretty garden? I wonder, close to tears, surrounded by pots and pots of this and that. At the nursery, I had been certain I had to have them; now, in their company, I am feeling kind of lost.

What goes next to what? How many of these with how many of those will make the picture perfect? And why did I put that there, what was I thinking? Oh, why didn’t I draw a plan, the way I tell others to do, and then stick to it?

If only it were a jigsaw puzzle of cut-up cardboard pieces, and there was in each plant a clue—a die-cut interlocking edge, or some other clever device, that fit it into place and let you know you’d got it right. But that is not how it is, as anyone who has tried this business of designing even a single flower bed will certainly confirm. The purple asters look good with the purple-leaved heuchera, and the allium is good spiking up through the artemisia, but those were merely good guesses—there are plenty of bad guesses around the place, too. No wonder so much of gardening is accomplished on one’s knees; it is a humbling experience.

MY LOVE-HATE of garden-making has been running perilously close to the dark side lately as I desperately dug and dug some more, determined to find the answer. But then came early June, and not-so-early June, and I was still out there, searching for the “right” arrangement. If I moved the smokebush one more time, or that poor, peripatetic pulmonaria, I would surely self-destruct. A weekend or two ago, I felt certain I could dig no more.

“If only I could plant everything in alphabetical rows, instead of trying to make it look good, I’d be off the hook,” I whined to a friend.

“There is no hook,” the wiser gardener replied, performing horticultural phone therapy. “You created the hook.”

That sounded very clever, and quite important, so I filed the remark carefully in my head. I wish he had told me where to put the damn Dutchman’s breeches, or the buckeye tree still sitting in a pot, but he did not. His garden is a showplace; he must know what he’s talking about, I figured.

But I did not really understand his words until the following weekend, back in the dirt. I found myself feeling stressed and panicky, starting ten tasks and finishing none, fixating on all the holes in the puzzle all over again. Then I was overcome by a wild, freeing thought: how liberating it would be to borrow the neighbor’s tractor and mow the whole place to stubble! If there had been a helpline for suicidal gardeners, I would have called it. Oh, if only for a 12-Step meeting of Gardeners Anonymous, I could have gone in and confessed:

“My name is Margaret, and I’m a plant-a-holic.”

“You created the hook.” Out of the mental file the words sounded, just in time. Hallelujah, I (and my garden) had been saved.

Yes, the hook is my doing, and I had hung myself on it, by my nasty habit of only seeing the problems, the weak spots, the areas in need of more tinkering. Perfectionism and the task of starting a garden do not mix, I learned just at that moment. My half-empty mentality gave no gold stars for what had been accomplished, only demerits for what had not. Something would have to change.

If I created the hook, then it is my prerogative to unhook myself, yes? I am therefore declaring this Throw In the Trowel Week, a horticultural holiday I heartily recommend that any other gardened-out souls adopt in their localities, too.

Admit it; spring is not just aging, it is past. So I say enough, and quickly set about to fill in any really embarrassing bare spots with annuals, or even pumpkin vines (where my puzzle’s weaknesses were on a grander scale). An even layer of mulch can work miracles in uniting plants that have far from knit together, too, and a cleanly cut edge around the bed makes things look almost bearable. After these last touches, only maintenance will be allowed till fall, when planting (hopefully without the panic) may be permitted once again.

Conveniently, it is especially good timing for such a declaration. The first official day of summer and the onset of consistently hot weather (hard on transplants and transplanters) have been marked. Time to plug in the last babies and crawl into the hammock with a glass of tea. Time to give it—the seedlings, the soil, the soul—a rest.

FROM THIS freshly liberated perspective, I think back upon my panic as if it were years in the past.

“All I seem to be doing is moving the same things around,” I recall saying to the same wise friend.

“Well, then you are learning the secrets,” he said, ever inscrutable.

And so I’ll swing awhile and think of what I’ll be able to move to where when the time comes, when the weather cools again and I am feeling refreshed, too.

Gardening is a process. Even great gardens don’t start out great; they take time, and lots of reshuffling, the kind of thing we’re all out there doing from early spring through right about now. Gardening is a process. I repeat this new mantra to myself now as I find myself with time to take a walk or watch the birds. Or—dare I say it?—with time to simply look at what I have accomplished.

Does your garden give you joy? Then it is a beautiful place, something not so common in this world of ours. A newcomer to this brighter philosophy, I am working myself up toward my next declaration: to call my garden beautiful—funky, unfinished spots and all.

Categoriesessays woo woo
Tags
Margaret Roach
Radio Podcasts
a way to garden podcast
Margaret's weekly public-radio show, from Robin Hood Radio in Sharon, CT, the smallest NPR station in the nation. Listen live at 8:30 AM EDT Mondays, to the replay Saturday morning, or stream the podcast anytime. LISTEN OR SUBSCRIBE FREE: Get the iTunes version; find it on the Stitcher app; or on Spotify, or your favorite podcast app. Browse past interviews below.
Podcast Archive

as I prepare for a new book, win my first!

I’VE BEEN IN THE STUDIO, recording my next book as an audiobook (yes!), editing video slideshows to accompany it, and more. The process is so..
Read More
2
March 4, 2011
8 Comments

THE OFFICIAL STATISTICS-DRIVEN all-time best-of list—the 50 stories you clicked on most since I launched A Way to Garden in March 2008—is all well and..
Read More
g
December 11, 2021
182 Comments

garden gear to covet, and to give, with ken druse

WHEN KEN DRUSE and I talked on the program a couple of weeks ago about putting our tools away for the winter, all cleaned and..
Read More