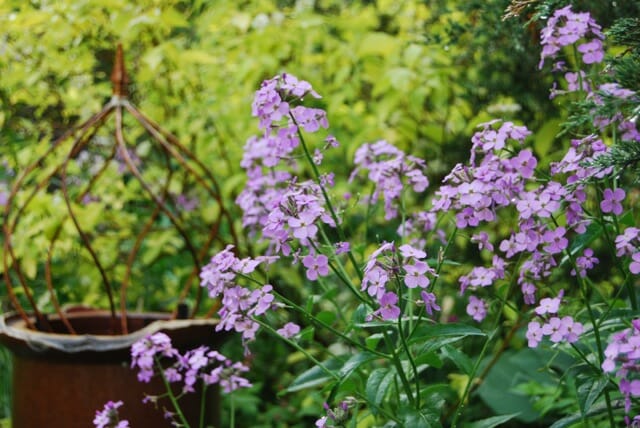 I WAS GOING TO SIMPLY NOTE TODAY how much I like the moment (now) when dame’s rocket, or Hesperis matronalis, blooms wherever it wishes among alliums and other late-May-and-June things, adding shades of lavender to the borders in its casual, self-sown manner. And then I read up on it (damn this internet thing…so much information, not all of it good).

It seems that dame’s rocket, a short-lived perennial and prodigious sower, is taking up more than its share of the natural spaces it spreads itself into (read: becoming invasive). In my area it is common along roadsides and woodland edges, in the filtered light of those spots, and really breathtaking at its peak. My plants blew in from across the road. But some states, such as Wisconsin, are noting its invasive tendency: the fact that it “escapes cultivation” so easily and takes up space that natives then must yield. Dame’s rocket has been on our shores since the 1600s, so it is no newcomer, but it is not a native American species, hailing from Eurasia. It’s often sold in “wildflower” seed mixes, and in packs by itself.

What do you think about our responsibility as gardeners when it comes to growing plants that are non-native, and this enthusiastic? It’s a subject I have a fair degree of knowledge about, having collaborated on “The Natural Habitat Garden” with Ken Druse some years ago and pondered many times since. Including just the other day on this blog when Highvalleygirl asked about some barberries I posted. Frankly, friends, despite my semi-expertise, I do not know the answer to this one. Tough stuff, and worth talking about (no fisticuffs, though, please). 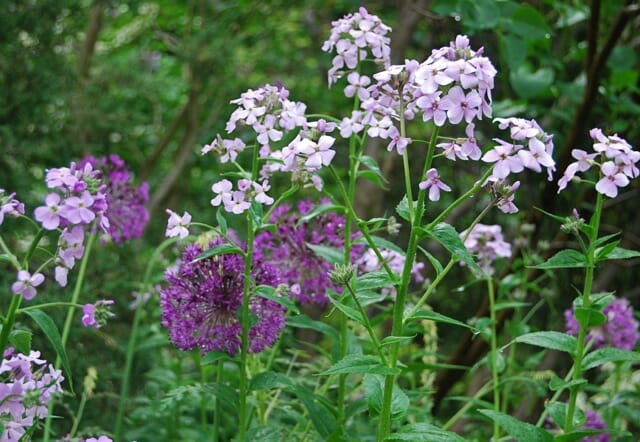 Categoriesannuals & perennials from seed shade gardening
Radio Podcasts
a way to garden podcast
Margaret's weekly public-radio show, from Robin Hood Radio in Sharon, CT, the smallest NPR station in the nation. Listen live at 8:30 AM EDT Mondays, to the replay Saturday morning, or stream the podcast anytime. LISTEN OR SUBSCRIBE FREE: Get the iTunes version; find it on the Stitcher app; or on Spotify, or your favorite podcast app. Browse past interviews below.
Podcast Archive

THE FIRST PERENNIAL GERANIUMS are rushing by; the Viburnum flowers are shattering. But the “June garden” (which started a couple of weeks early, like everything..
Read More
d
December 30, 2017
285 Comments

TO MARK A YEAR of monthly Q&A podcasts together, Ken Druse and I themed our latest conversation to a topic that many listeners ask about..
Read More
w
July 8, 2018
28 Comments

week 15: visual relief from the heat, all fresh and white

IT WAS HOT, really hot (and will be again, no doubt). There was a bit of visual relief, though: Through any windows that were not..
Read More