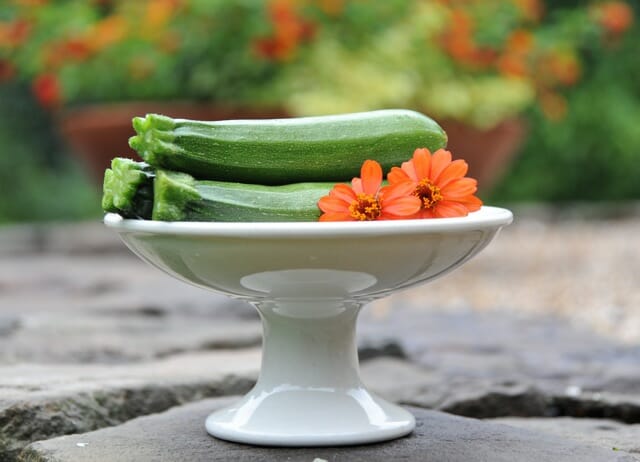 LET’S BE FRANK–SIZE DOES MATTER. The naked truth: Smaller is better, or at least when talk turns to cucumbers and zucchinis, as it does in harvest season. Before they get away from us and swell to baseball-bat size, it’s time to get picking and get pickling—which is where the spicy part comes in.

But first, that key reminder: For best flavor and texture, harvest both zucchinis (Cucurbita pepo) and cucumbers (Cucumis sativus) before the skin gets hard and dull, when they still look like the beauties up top. Bitterness from an increase in the chemicals called cucurbitacins that these crops (and melons, pumpkins and gourds) contain may increase with overripeness, though it can also result from environmental stressors such as uneven soil moisture, low soil fertility, low soil pH, high heat or wide swings in temperatures. Once you’ve got such tender subjects in hand, head directly to the kitchen. 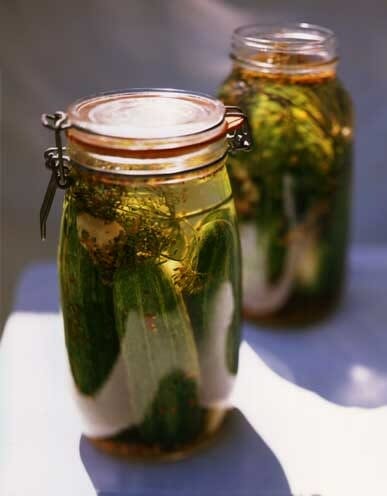 IAM KNOWN FOR MY PICKLES, and more all the time thanks to search engines and other such decidedly non-culinary efforts. The second-most-popular post I’ve ever published (just an inch behind my slideshow of gorgeous vintage “green” WPA posters from 1936-43, like the one below): the easy refrigerator pickles, left, that a Long Island Rail Road conductor handed down to me more than 20 years ago, as his mother had to him. Yes, you can quarter any old cukes lengthwise into spears if they’re too big, but wouldn’t it be better to pick them young (or grow/buy a pickling-sized cucumber variety in the first place)? There is far more crunch that way. 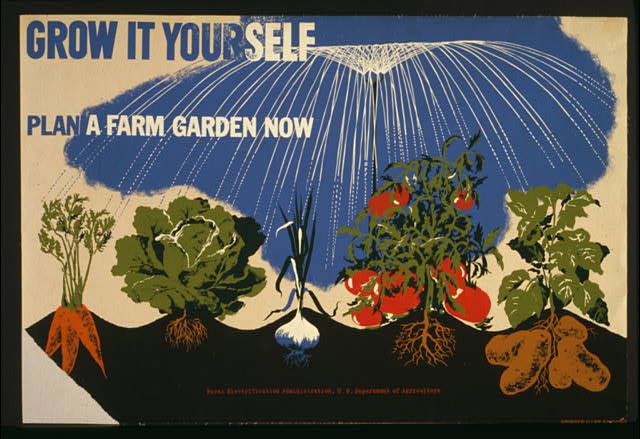 QUICK ASIDE: WHAT IN THE HECK IS PICKLING SPICE? I get asked this question a lot because of those ever-popular pickles, so here’s the answer, and some recipes if you want to blend your own.

ZUCCHINI MAKE GREAT PICKLES, TOO, with a little less crunch but no less flavor.  This botanical cousin of the cucumber can be put up using the following recipe from my favorite reference, “Stocking Up III” (by Carol Hupping and the Rodale Food Center).

Cut unpeeled zucchini into thin disc-shaped slices. Peel onions and slice thin. In an enamel or stainless saucepan combine the remaining ingredients. Bring to a boil, then pour over the prepared vegetables, and let stand for an hour.

Return to the heat, bring to a boil, and cook for 3 minutes. Pour into hot, scalded canning jars; cover tightly. Refrigerate after they cool.

2 more ways to use all that zucchini

Categoriesfreezing & canning herbs pickles & condiments recipes & cooking vegetables
Tags
refrigerator pickles
Radio Podcasts
a way to garden podcast
Margaret's weekly public-radio show, from Robin Hood Radio in Sharon, CT, the smallest NPR station in the nation. Listen live at 8:30 AM EDT Mondays, to the replay Saturday morning, or stream the podcast anytime. LISTEN OR SUBSCRIBE FREE: Get the iTunes version; find it on the Stitcher app; or on Spotify, or your favorite podcast app. Browse past interviews below.
Podcast Archive

NEARLY 30 YEARS AGO ALMOST TO THE DAY, I ate pickles for breakfast with lovely Dan Koshansky, a retired railroad conductor and an organic gardener..
Read More
m
July 14, 2014
482 Comments

I SOWED CUCUMBERS the other day, with the idea of late-season pickles, and just after that, talked to my friend Gayla Trail of You Grow..
Read More
c
July 20, 2011
54 Comments

cucumber-growing q&a, and the best pickles ever

IT TOOK THE LONGEST TIME, watching generations of flowers that seemed to come and then go nowhere, but last week it finally happened: I got..
Read More