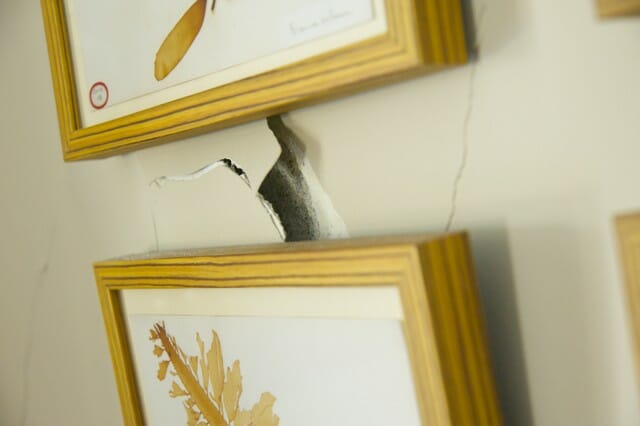 THE SKY ISN’T FALLING, but the living room wall is. I’m cracking up from too much winter, one slab of 1880s plaster at a time. With each chunk lost to the upward force of a foundation heaving from frost, I lose a shard of mental status, too. Sound familiar?

As a policy, I don’t like to complain about winter. I’m hardy but herbaceous, inclined to hide quietly and regroup each offseason—happy for the downtime and change of scenery, happy for moisture in any form to recharge the system around me. But this is silly:

The back door hasn’t opened since December; the front one will, but not the storm door just beyond. Just a single portal to the forbidding outer world beyond is operable, and it requires cardboard shims (below) to stay shut, the latch and strike plate no longer embracing willingly like the old friends they are, or were. 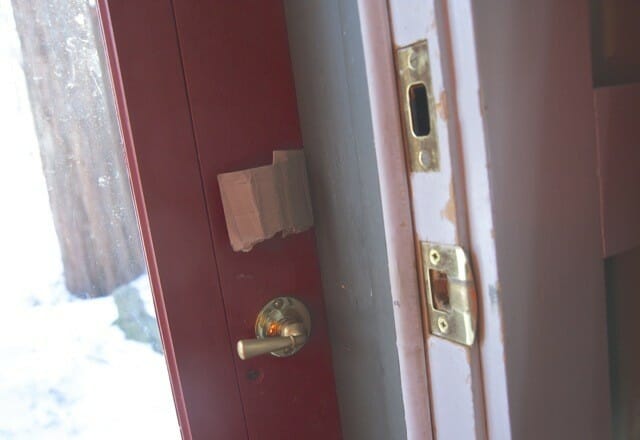 Of course it’s not just here (where February was the coldest since 1934): There’s news of sleet from Texas to Tennessee; 2 feet of snow in parts of Kentucky; of Boston, Boston and more Boston (102 total inches last time I checked); of no snow (or rain) where it’s desperately needed, and too much where it’s not. 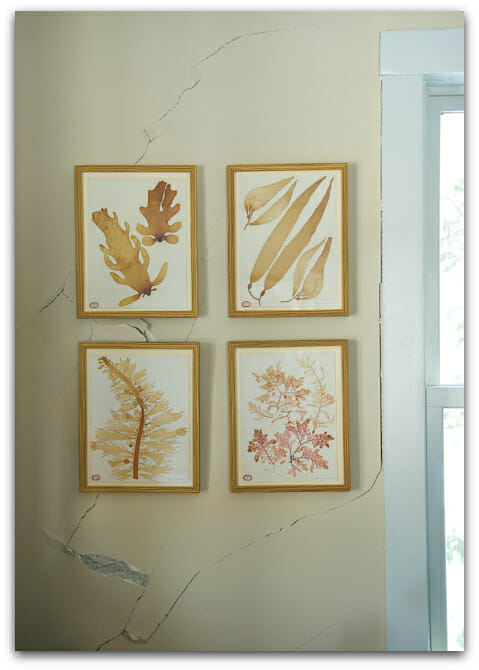 I LISTEN to the world talk about the weather from my perch on the living-room sofa, the only room where my ex and I left the original plaster in place when we otherwise gutted this old house decades ago. Lately, the meteorological headlines are punctuated by the occasional small thud, but mostly by a sound like handfuls of coarse sand falling onto a hard surface from on high. Crumbling.

There is nothing to do (ah, true powerlessness), and won’t be until sometime in May, when the frost is out of the ground—when the doors can open to get construction debris in and out. Each day, the wall takes on fascinating new dimension; the tributaries of the single vertical crack that opened three weeks ago are now many, and the branching and widening continues.

When I first came to this landscape, about 30 years ago, I learned about the frost line pretty quick. Naïve but energetic, I dug a water garden 18 inches deep, and promptly populated it with fish. Around Thanksgiving that first year, as the weather turned abruptly, someone mentioned that the frost line here was twice that depth—that I should have gone at least as deep, or else.

The Victorians who dug what is now my foundation apparently knew from frost lines, and went 5 feet down, but time has undermined their efforts. No matter; it’s just a wall.

SO HERE’S the reason I am writing this:

If you want to complain about the weather, this is your big chance.

And then, together, weather or not, we shall move on and sow some seeds, and draw our plans for the garden to come, yes? We’ll just let it all go, and gather momentum in a forward march, moving out of the frozen state that has possessed my doors and my brain, and into locomotion, propelled by volition and by hope.

(P.S.--Before you ask: Those are vintage herbarium specimens of pressed seaweed hanging–barely–on the erupting wall, part of a collection of them displayed throughout the room.)

Categorieswoo woo
Radio Podcasts
a way to garden podcast
Margaret's weekly public-radio show, from Robin Hood Radio in Sharon, CT, the smallest NPR station in the nation. Listen live at 8:30 AM EDT Mondays, to the replay Saturday morning, or stream the podcast anytime. LISTEN OR SUBSCRIBE FREE: Get the iTunes version; find it on the Stitcher app; or on Spotify, or your favorite podcast app. Browse past interviews below.
Podcast Archive

happy accident: a garden for 365 days

EACH FALL, GARDENING FRIENDS CAN BE HEARD swapping tales of garden cleanup and whatever the year’s aberrant weather brought, while also sounding their annual lament:..
Read More
m
November 8, 2010
50 Comments

my annual question: what are your winter plans?

NOW THAT WE’RE WITHOUT DAYLIGHT SAVINGS, and “with” the first snow, it seems the moment to ask: What do you want to do together this..
Read More
h
February 23, 2016
46 Comments

YOU CAN COUNT ON Eranthis hyemalis, or winter aconite, for a couple of things: to be a pioneer each spring, blooming extra-early even among the..
Read More