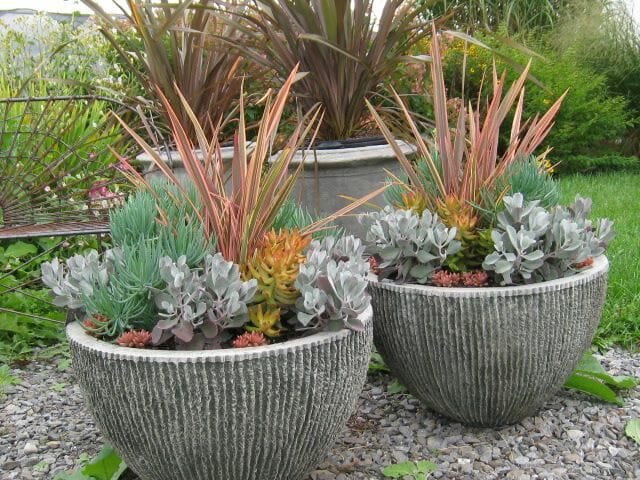 USUALLY ON MEMORIAL DAY or thereabouts, I teach a series of container-garden workshops in my garden with my longtime friend Bob Hyland, a garden designer and former public-garden administrator and nursery owner who always dubbed our duet “Contained Exuberance.” Want to take your pot designs up a notch this year, without getting overwhelmed? Read (and listen) on:

Bob was VP of Horticulture at Brooklyn Botanic Garden before opening Loomis Creek Nursery a few minutes’ drive from me about 10 years ago.  He has since relocated to Portland, Oregon, and debuted a new container-garden business in 2013 in South Portland. It’s a 4,500-square-foot indoor-outdoor pop-up shop specializing in great containers, ready-to-go pot designs, and plants for containers, too, in collaboration with the until-now-wholesale-only growers at Xera Plants. (Bob still designs gardens, too–in a pot or not!)

CONTAINER GARDENING was the topic of the April 29, 2013 edition of my weekly public-radio program with guest Bob Hyland. Listen anywhere, anytime: Locally, in my Hudson Valley (NY)-Berkshires (MA)-Litchfield Hills (CT) region, “A Way to Garden” airs on Robin Hood Radio’s three stations on Monday at 8:30 AM Eastern, with a rerun at 8:30 Saturdays. It is available free on iTunes, the Stitcher app, or streaming from RobinHoodRadio.com or via its RSS feed. The April 29, 2013 show can be streamed here now. Robin Hood is the smallest NPR station in the nation; our garden show marked the start of its sixth year in March 2015.

LET GO OF THE “IDEAL” that is so often seen in books, magazines, catalogs—the notion that you can have 7 or 9 or 10 kinds of plants in one container “all perfectly blooming in unison and perfectly coiffed,” as Bob describes this semi-fantasy.

Let go of the notion, too, that annuals are exclusively what belong in pots. Anything can be planted in a pot: perennials, for instance. “A big juicy hosta in a pot can be quite dramatic,” says Bob. “It lifts that hosta above the ground and really accentuates it (and may help keep it away from slugs and snails, too).” So can euphorbia and heucheras or heucherellas and hellebores (below, a shade pot of Heucherella ‘Sweet Tea’ and Euphorbia ‘Blackbird’ and  Euphorbia characias subsp. wulfenii and Helleborus ‘Ivory Prince’). 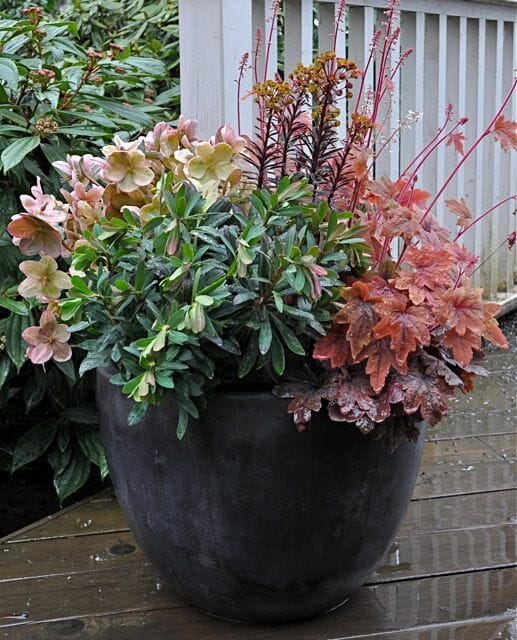 Shrubs work, too. “I like to think of the four seasons, even in my container designs,” says Bob, “so for instance all those shrubby dogwoods with showy leaves in summer and bright twigs in winter are great for year-round containers.”

Think of a stunner such as the white-variegated red-twig Cornus alba ‘Ivory Halo,’ he suggests, in a wine- or whiskey-barrel sized pot of any weather-proof material, such as faux concrete or faux terra cotta.  (That’s ‘Ivory Halo’ in the left-hand pot in the photo below on this page.) Or plant not-quite-hardy shrubs and small trees in pots that get tucked into the garage in winter (as I do my Japanese maples, and a friend nearby does a collection of unusual hydrangeas). Even evergreens: that’s the Japanese holly called ‘Sky Pencil’ in one of Bob’s client’s pots, below. 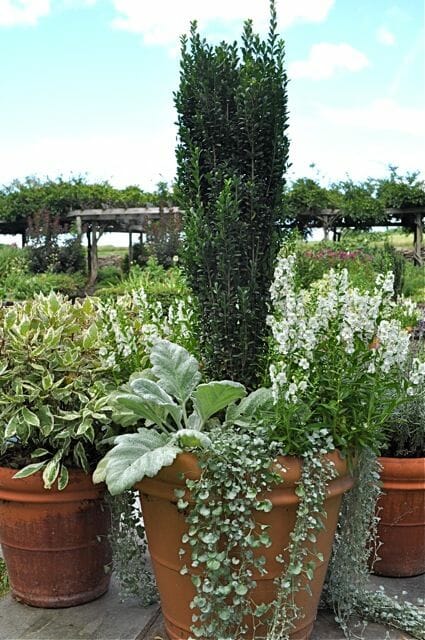 Oh, sorry–what does thriller, filler, spiller mean? The “thriller” or spike is the architectural element, “the vertical oomph;” the filler is the medium-sized plant in the mix. “The classic filler is a geranium,” says Bob, “and it gives us some volume and uniform color for the design.” And then you have something that spills and trails–things that break the edge and soften the pot, such as sweet potato vine, or alyssum, “or real spillers that really drop vertically, such as Dichondra ‘Silver Falls,’” above, trailing over and onto the pavement by late-season. Tradescantias and plectranthus are two of his other favorites.

“I like to think in simplistic terms,” says Bob, whose designs nevertheless look anything but simplistic or commonplace.  “I think it’s better if you just think of those three plants and choose wisely.”

Don’t shoot for the unrealistic “happy 9-some” of all those magazine photos staged for the occasion of a photo shoot, he says, or the giant containers at public gardens with expert staffs to groom them, and greenhouses that can produce backup plants for later fine-tuning and swapping out. Start with the basic three, and then maybe add one or two more at most.

“I think when you start getting above five it gets too complex,” Bob says. “Are they all compatible; will watering or the same other care make everyone equally happy? And there’s usually a thug in the group that will try to take over.”

Again, though: Choose wisely. Expand your definition of the “thriller” to include yuccas, perhaps, or cordylines and phormiums (the spike in the top-of-the-page pots is the phormium called ‘Flamingo,’ growing with Sedum nussbaumeranum,  Senecio ‘Kilimanjaro’ and Kalanchoe pumila ‘Dwarf Blue’). “These really giant architectural forms are hardy out in Portland, in the ground or big pots,” he explains of the modified Mediterranean climate he’s gradually learning to garden in, where no measureable rainfall happens from June 15 to September 15 in a “typical” year. Elsewhere, such tender beauties can be stashed indoors with some success.

AND THEN THERE ARE the basics, the how-to steps. Such as: What is a good potting soil?

“Generally when you open a bag of potting soil, they’re too fine—too much peat moss–and then they become heavy and sodden,” says Bob (and Margaret). “I like to find one with more shredded bark, which also reduces my use of non-renewable peat resources.”

Look at the little recipe on the label, he says—and watch out for ingredients you may not want, such as added chemical fertilizer that may be lurking.

If you can’t find good-textured commercial mixes locally, beef them up a bit by working in some composted leaf mold in the bottom of containers, or mixing in other compost. (I use some of my relatively fine-textured composted mulch made from stable bedding.) We are talking about adding texture, not making them heavy so they get mucky and stay wet too long.

Categoriesannuals & perennials container gardening how-to ornamental plants radio podcasts trees & shrubs types of gardening
Radio Podcasts
a way to garden podcast
Margaret's weekly public-radio show, from Robin Hood Radio in Sharon, CT, the smallest NPR station in the nation. Listen live at 8:30 AM EDT Mondays, to the replay Saturday morning, or stream the podcast anytime. LISTEN OR SUBSCRIBE FREE: Get the iTunes version; find it on the Stitcher app; or on Spotify, or your favorite podcast app. Browse past interviews below.
Podcast Archive

2010 events: in and around margaret’s garden

ONE OF MY FAVORITE PARTS OF GARDENING has always been the connection with other gardeners—meeting you. To make sure I get a proper dose of..
Read More
a
April 25, 2010
9 Comments

a sunny debut: workshops in the garden

PRUNING, DIVIDING, EDGING, MULCHING, AND WISECRACKS were on the program yesterday when Bob Hyland and I began Season 2 of the workshop series we’d debuted..
Read More
m
April 29, 2012
76 Comments

may 20 container workshop: win a ticket!

WE CALL IT ‘CONTAINED EXUBERANCE,’ the container-garden workshop that garden designer Bob Hyland and I do in May each year at my garden in the..
Read More