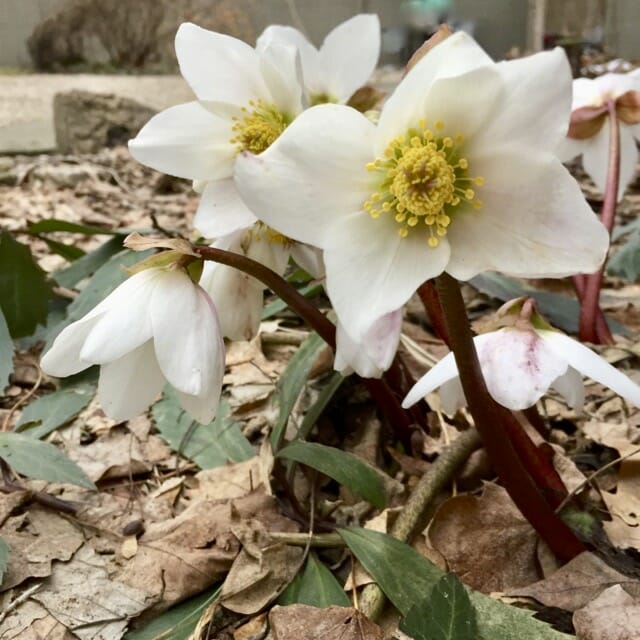 TRUTH: IF NOT FOR THE brave beacon of the full-bloom Christmas rose—dear old against-all-odds Helleborus niger (above)—I would just have given up. Yes, there were some snowdrops, too, here and there, but even the usually fearless winter aconite, Eranthis hyemalis, couldn’t seem to catch a break. There hasn’t been a truly bright-enough, warm-enough day since they jumped up from the chilly ground for them to dare open their sunny flowers, which just sit there shut tight (below) as if not quite sure they’ve come to the right place. Out, but not really out. 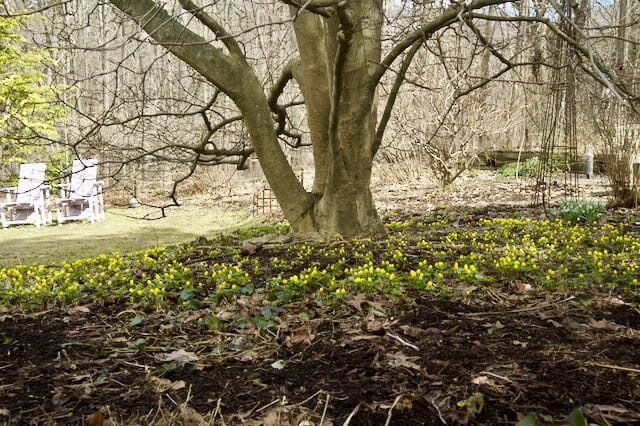 There has been no mad quacking, the sound of the wood frogs, the earliest species to mate. Their antics, often as the ice has barely begun to melt on the backyard water garden, usually spur me onward—if they can be so frisky against the cold, I figure, so can I.

At least dear H. niger dared flower when nobody else really did, or could.

May 5—my first Open Day of the season—looms. Uh-oh; I was getting nowhere except panicky, save but for a few big beds of hellebores I’d cut back so far, against my better judgment and usual admonition never to work in frozen or mucky soil. 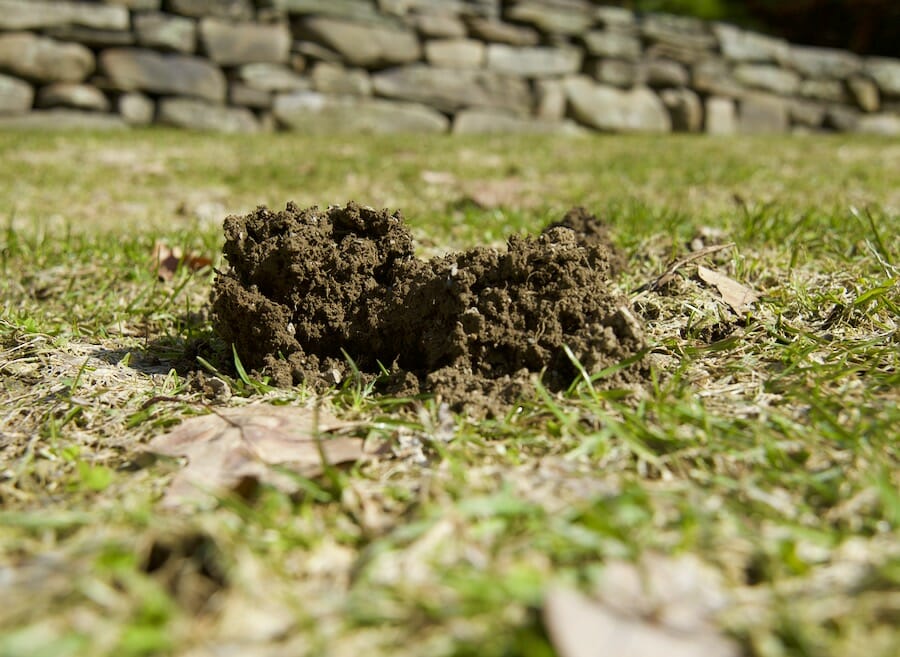 The moles and voles, incidentally, seem undeterred by any such conditions, and when the snow disappeared there were signs of their handiwork—including an impressive series of mole hills, above, signs that those fossorial insectivores (underground-dwelling insect-eaters) were tunneling energetically deep below. I never trap moles, but am far less benevolent toward the unrelated plant-eating rodents whose name starts with a “V.” (More on telling the two apart.) 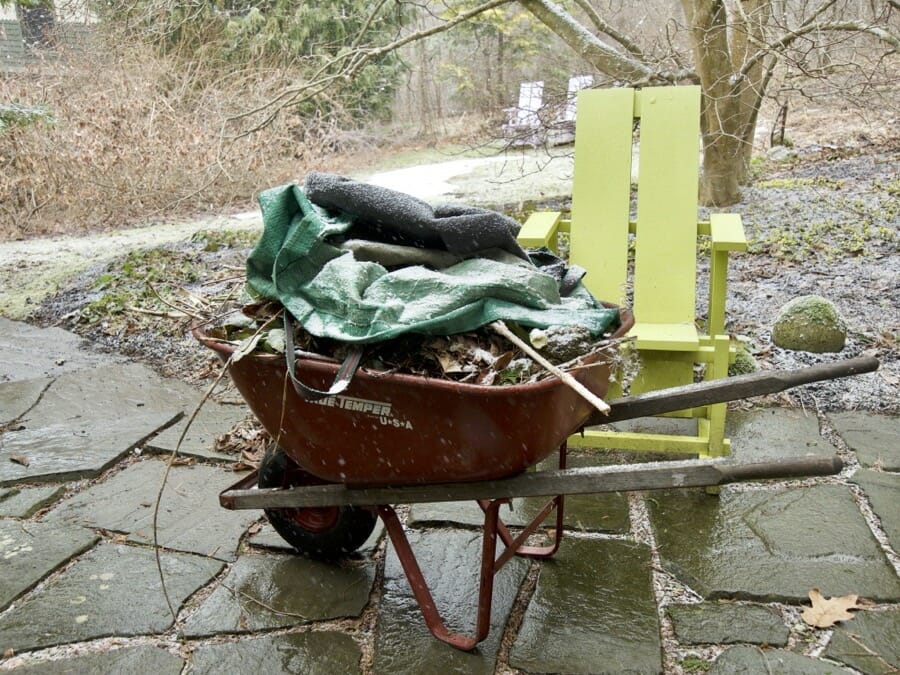 Then it started snowing again at mid-week, and dipped to around 20F, and the rhododendron leaves curled up like tightly rolled cigars—like January, not April. 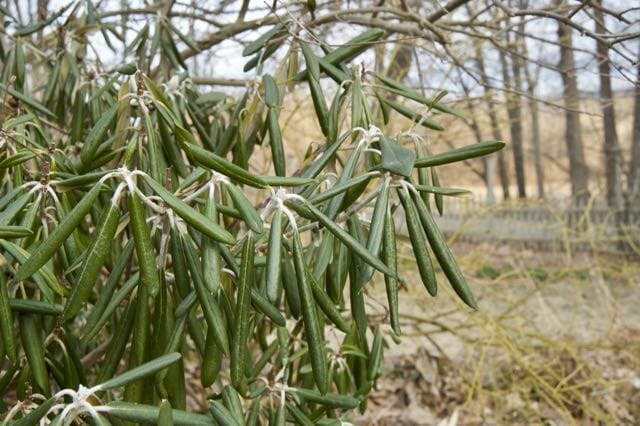 I mean, it’s interesting what the rhodie leaves do, the response called thermonasty, a self-defense movement in response to temperature, but I grow tired of “interesting” and want to get on with a little progress. I long to break a sweat.

I am no lover of the wind—no anemophiliac (a word I may have made up, but anemo– is the prefix for wind, so why not?). But I will say this to its credit: Things were pretty mucky as deep snow finally relented this last week, until a night and a day of serious wind blew in and did some fast dehydrating. Thank you, wind (but do you have to be so scary?). 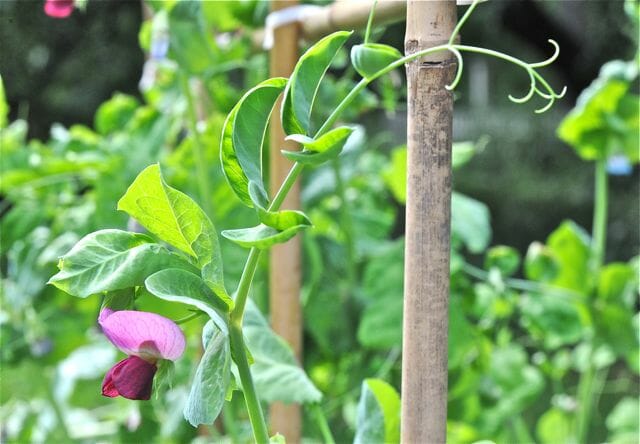 Thanks to the wind’s good work, I  planted the peas in my raised beds, with Gregor Mendl and his genetic experiments in mind, noticing how some varieties have purplish seeds and some green, dreaming of which would have pink or purple or the more common white flowers to come (and then those peas).

Thanks also to the wind’s assist, the ground was firm enough for shuttling debris to the far-reaches compost heap, and for more feet to gingerly move with mine about the place. Help arrived, so on Saturday I was not alone but had the boost of rake-toting human companionship, and we even sat in a sunny spot and shared our lunches for the first time since last October. Hooray.

I should have mucked out the water gardens—yes, I know, I’m late on my early spring water-garden checklist—and started the plumbing up again. But a few tubing bits remain frozen, and oh, that’s water’s cold to the touch. Maybe tomorrow.

I see on eBird from checklists others have submitted that some of the migrants are starting to move in locally, but so far my biggest excitement was found brown-headed cowbirds. Not that I don’t like cowbirds (actually, many people malign them, but not I, and here is why). That’s a female, above (photo by Tom Grey). Bring on the tree swallows, too, and a phoebe to nest on her usual back-porch spot, some warblers and a towhee and then, in time, the rest of them. Bring on spring.

Categoriesgarden prep
Tags
this week in the garden
Radio Podcasts
a way to garden podcast
Margaret's weekly public-radio show, from Robin Hood Radio in Sharon, CT, the smallest NPR station in the nation. Listen live at 8:30 AM EDT Mondays, to the replay Saturday morning, or stream the podcast anytime. LISTEN OR SUBSCRIBE FREE: Get the iTunes version; find it on the Stitcher app; or on Spotify, or your favorite podcast app. Browse past interviews below.
Podcast Archive

IF YOU’RE NOT GROWING Baptisia, why not? Its credentials are impeccable: Baptisia are native to the United States, drought tolerant, deer resistant, and have not..
Read More
d
May 10, 2019
148 Comments

WHEW! YOU FINALLY got everything into the ground, transplanting every little seedling and sowing every seed, and it’s time to sit back and pat yourself..
Read More
o
March 29, 2012
24 Comments

out-of-synch spring after a non-winter: a recap

I KEPT PANICKING to hurry up and get my chores done, because the scenery outside looked like late April, or at least it did before..
Read More