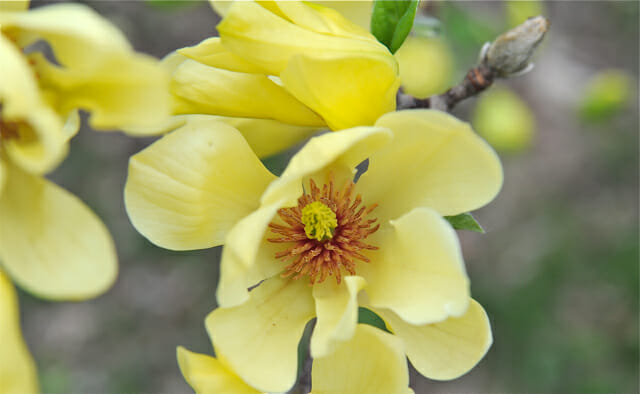 THERE IS MORE THAN those admittedly extravagant flowers to recommend the Magnolia, though many of us think of them as just that: flowering trees. Not a bad thing to have around at this time of year—but hardly the whole story of this ancient genus with its many other ornamental features, one of the oldest flowering plants on earth.

On my radio show and podcast, I spoke with Adam Wheeler of Broken Arrow Nursery—growers of a staggering 80 selections of magnolias—about the range of possibilities, and how to care for them.  Plus: Adam’s a champion giant pumpkin grower, and offers some tips on that, too.

Understatement: “We’re big magnolia fanatics,” Adam says of Broken Arrow’s collection, which continues to grow. Many more (plus distinctive shrubs, vines, perennials…) are available at the Hamden, Connecticut, retail location than can ship by mail, but good news:

Adam Wheeler will be my guest in my Hudson Valley, New York-area garden during each of my 2015 Open Days (May 9, June 6, August 15, September 19) when he will put on a giant plant sale in the driveway.  Want something larger than what’s in the mail-order version of the Broken Arrow catalog, or that’s not offered by mail at all? Be in touch with the nursery and perhaps they can drop it off here for you when you come to visit.

MAGNOLIAS were the topic of the April 8, 2013 edition of my weekly public-radio program, and I also cover some giant pumpkin-growing tips with my friend Adam Wheeler, an expert in both. Listen anywhere, anytime: Locally, in my Hudson Valley (NY)-Berkshires (MA)-Litchfield Hills (CT) region, “A Way to Garden” airs on Robin Hood Radio’s three stations on Monday at 8:30 AM Eastern, with a rerun at 8:30 Saturdays. It is available free on iTunes, the Stitcher app, or streaming from RobinHoodRadio.com or via its RSS feed. The April 8, 2013 show can be streamed here now. Robin Hood is the smallest NPR station in the nation; our garden show marks the start of its sixth year in March 2015. 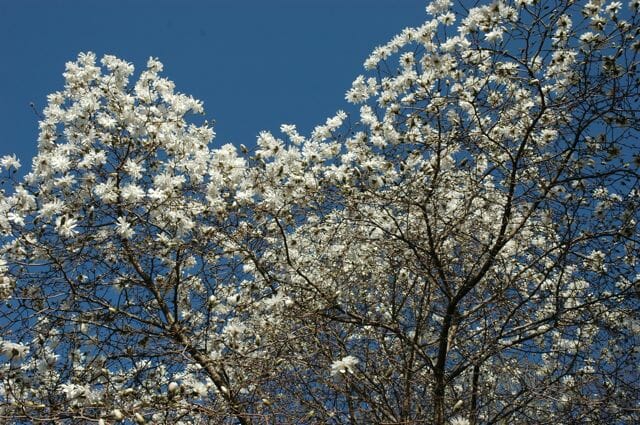 magnolias, beyond their flowers only

FROM MY CONVERSATION with Adam Wheeler, here are some highlights about magnolias–including their range of flowers and many other traits beyond that, plus tips for their care:

Flowers:  Colors range from whites to pinks and purples and burgundies–and a whole group of yellows (such as ‘Daphne,’ said to be the darkest yellow to date, or upright ‘Yellowbird’), and there are bicolor blooms now, too.  A favorite example of a bicolor, Adam says: ‘Sunsation,’ which is yellow, brushed with burgundy at the base.

Size: Magnolias range from shrubbiest such as ‘Milliken’ (a saucer magnolia, with pinkish-lavender blossoms, that stays shrubby at just 8 feet tall) or ‘Kiki’s Broom’  (just 2 by 5 feet in 10 years, with pink-and-white flowers)

to the majestic cucumber magnolia, 80-foot M. acuminata, one of the parents the Brooklyn Botanic Garden used in creating its famed yellow hybrids.  Many are in the 20-to-30-foot range. 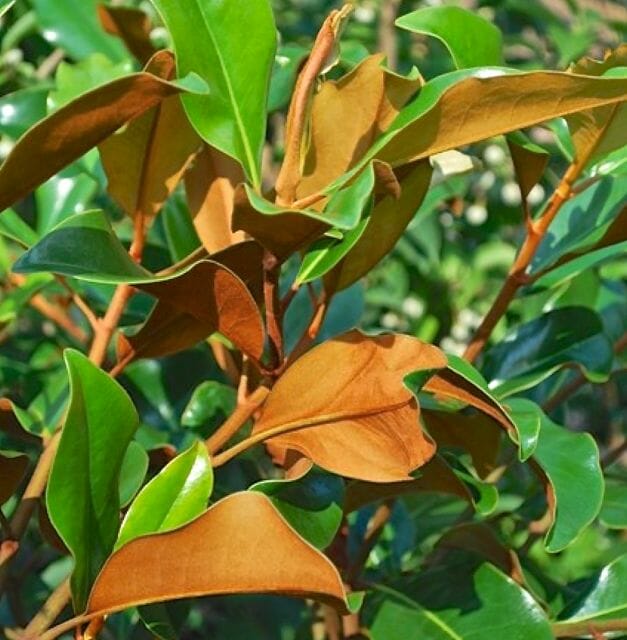 Foliage: When they’re looking to add a new magnolia to the Broken Arrow collection, leaf-loving Adam admits that foliage is one the things he zeroes in on. Possibilities range from deciduous to evergreen, with deep glossy greens such as M. grandiflora to paler colors, some backed by silver that a breeze may help show off to great effect.

Though our Southern magnolia was once suited merely to warmer spots, “more and more research and breeding being done to increase cold hardiness of Magnolia grandiflora,” says Adam, with cultivars that are happy in Zone 6 as long as sited in a wind-protected spot, and even in Zone 5—such as ‘Bracken’s Brown Beauty’ (above), ‘Little Gem,’ and ‘Kay Parris’ (the last two are more compact).

M. virginiana, the sweetbay magnolia and another evergreen native species, is perfectly cold hardy into warm Zone 4 and Zone 5, says Adam–but it won’t remain evergreen in the colder areas in some winters. No worry; fresh leaves will soon be delivered.

Fragrance: To some extent it’s often overlooked as a feature when selecting a magnolia, says Adam, but their fragrance can be really impressive. A fragrant favorite of his: Brooklyn Botanic Garden selection ‘Judy Zuk,’ for example (yellow flowers with an apricot base, and a fruity fragrance Adam describes as “like Fruit loops”—one his young daughter loves for just that adorable reason). 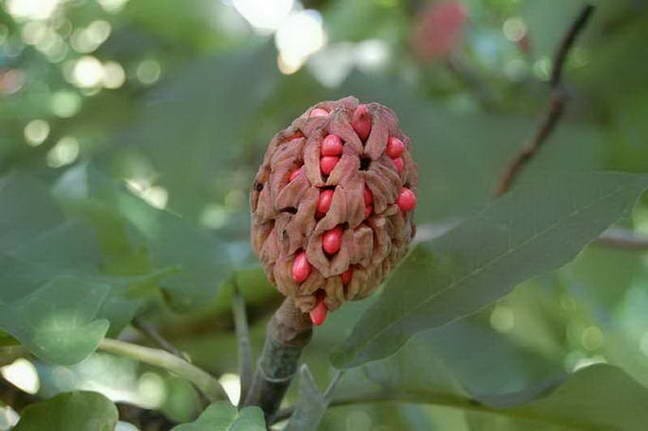 Seedpods: Another feature that people also overlook: the fruiting structures that hold the magnolia’s seeds. (I love them.) M. macrophylla can have softball-sized seed structures. M. sieboldii has red seed structures “almost like a Chinese lantern,” Adam says.A quality to investigate—and birds and small mammals in the garden will be happy that you do so, I can say from experience. (That’s M. ashei‘s seedpod, above.)

General Care: Magnolias are tough plants, especially once established, but site them where they’re protected from strong winds to protect flowers and sometimes foliage, too. As far as soil, one that’s rich in organic matter is best because they are heavy feeders. Position them in an area that’s not a frost pocket.

Pruning: With young plants in the nursery field, Broken Arrow will prune to dictate eventual shape–taking out multiple leaders, for instance. After that, you might simply remove badly placed branches, but generally these graceful trees don’t need a lot.

more about magnolias and etc.

(Thanks to Broken Arrow for the ‘Bracken’s Brown Beauty’ and M. ashei photos. That’s my photo of yellow-flowered ‘Butterflies’ up top, and white flowered ‘Ballerina’ against the sky. Disclosure: Broken Arrow is a seasonal sponsor of A Way to Garden.)

Categoriesdeciduous radio podcasts trees & shrubs
Radio Podcasts
a way to garden podcast
Margaret's weekly public-radio show, from Robin Hood Radio in Sharon, CT, the smallest NPR station in the nation. Listen live at 8:30 AM EDT Mondays, to the replay Saturday morning, or stream the podcast anytime. LISTEN OR SUBSCRIBE FREE: Get the iTunes version; find it on the Stitcher app; or on Spotify, or your favorite podcast app. Browse past interviews below.
Podcast Archive

DO YOU RECALL the first plants that caught your eye–the ones that proved your gateway drugs into plantaholic behavior? Andrew Bunting looked out his childhood..
Read More
g
March 9, 2012
239 Comments

WHAT I MISS MOST about my Martha job: I had other garden geeks as colleagues, and the chance to talk plants nonstop. These days I..
Read More
h
March 23, 2008
9 Comments

THE ONLY SHAME about magnolias is that so few varieties are widely grown. You will certainly have seen the overblown saucer kinds (called Magnolia soulangiana)—usually..
Read More