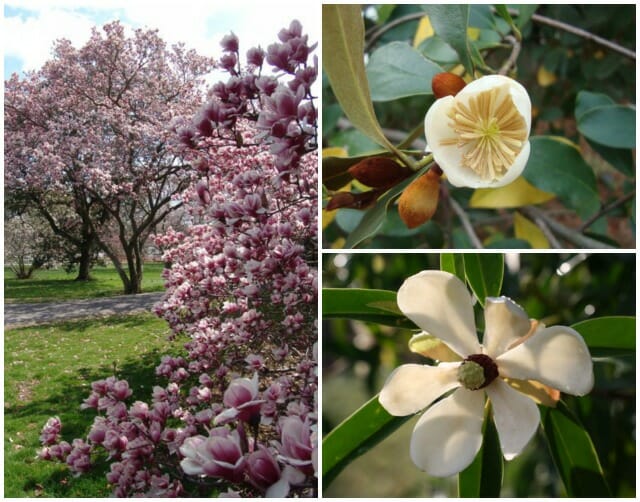 SO MANY MAGNOLIAS, SO LITTLE SPACE. I sought recommendations from Andrew Bunting, president of Magnolia Society International and Curator of the Scott Arboretum at Swarthmore College (with its impressive Magnolia collection of about 130 kinds, including the ones at left, above)—and first, he shared his expertise about their basic care, and especially pruning.

FULL SUN (or light shade in hotter zones), and well-drained soil that’s high in organic matter is the basic regimen (though the sweetbay magnolia, M. virginiana, can also take a wet spot). Give the others those requirements, plus a light layer of aged organic mulch, and they generally will thrive. Fertilizing isn’t needed, says Andrew. (At Scott they only mulch the circles of trees in lawn areas, using a combination of leaf compost and one-year-old composted wood chips.)

Magnolias are not the easiest to plant under, however, because of their fleshy, moisture-hogging root systems.  “Some plants that can take dry shade will make a go of it,” he says, suggesting Epimedium, or Asarum, or Christmas fern. Among bulbs, try Scilla, or Chionodoxa, or even toadlilies (Tricyrtis), he recommends.

Magnolia grandiflora, the so-called Southern magnolia, is the toughest of all to underplant—since it has not just those roots, but also evergreen foliage to limit water that reaches the area underneath.

Though magnolias are generally tough, various species of scale insects can be an occasional pest at the Scott Arboretum, which is just outside Philadelphia (information on the collection, and visiting).

I’d add yellow-bellied sapsuckers as a formidable opponent, and one is on the verge of killing the second of my two big old magnolias, and has offed other ornamental tree species here. Andrew confirms that the bird does like magnolias, which is why I sadly will not be replacing mine.

The basics of magnolia planting and care, from the Magnolia Society 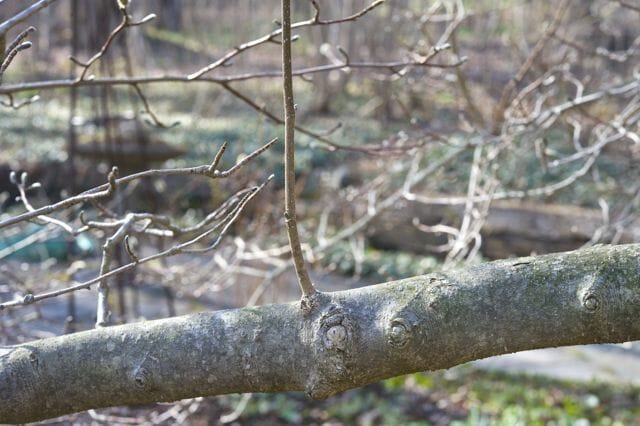 THOUGH MAGNOLIAS generally need little pruning, there are two things to keep a particular eye out for: Since almost all magnolias are still sold as grafted plants, Andrew says, be sure to prune out any shoots that may sprout at the base, emerging from the rootstock.

Likewise, get rid of water sprouts—technically called “epicormic shoots,” he says (photo above of one)—that form as vertical growth on branches, especially on the saucer types. At Scott Arboretum, epicormic shoots are removed in late winter.

Otherwise: “We do selective pruning, just to shape them up or limb them up over time as desired.”

The Scott’s specimens of the Little Girl series of magnolias, for instance, came to the garden in 1968, when the eight shrubby, smallish new varieties (reaching maybe 12-20 feet, a good home-garden size) were introduced by the U.S. National Arboretum. The surviving plants really haven’t been pruned since—but rather allowed to just develop into their natural shapes. (One of them, ‘Betty,’ is in the photo at the bottom of the page.)

Sometimes, though, you want a magnolia to fit a particular garden need or space.

“I have seen ‘Galaxy’ shaped as a street tree, for example,” says Andrew, “limbed up so its head begins 5 or 6 feet off the ground.” 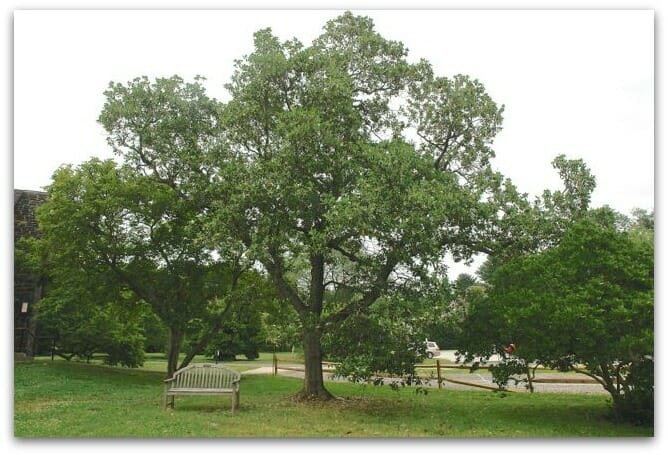 At Scott, a group of yellow-flowered magnolias is limbed up even higher, providing the high shade that offers the arboretum’s tree-peony collection that kind of light it prefers. Both ‘Galaxy’ and the yellow-flowered types tend to be fast-growing—and fast-growing ones are the best magnolias for limbing up. The M. virginiana var. australis variety called ‘Henry Hicks’ is also treated this way on the Swarthmore campus (above).

Perhaps the extreme of magnolia pruning, says Andrew: Try creating an espalier with a grandiflora type (where hardy and reliably evergreen, of course–typically Zone 7ish, perhaps 6B, or milder).

BY NO MEANS an exhaustive list, what follows is instead the result of an impromptu chat the other day—some highlights, not an encyclopedia. A link to sources that sell some of the lesser-known types is at the bottom of the page.

Want a native species? Many magnolias are Asian, but seven or eight are North American natives, including acuminata (the so-called cucumbertree magnolia); tripetala; macrophylla and macrophylla subspecies ashei (below, flower detail; tree at bottom of the page); grandiflora; virginiana; fraseri, and pyrimidata. 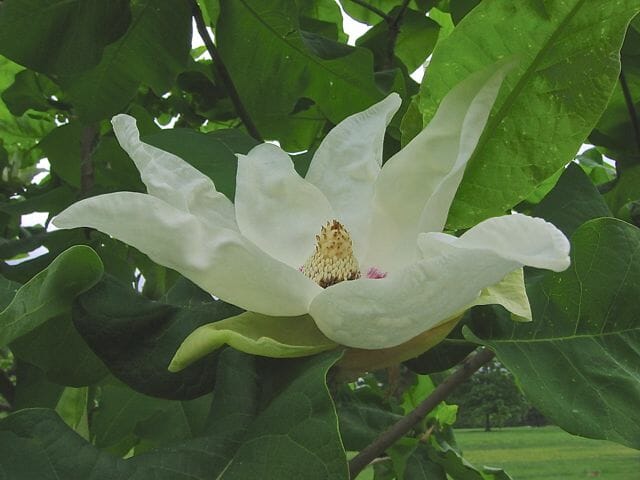 Dealing with wet soil? Magnolia virginiana is the only choice.

To view from below (as if planted on a wall, above a pathway): Magnolia sieboldii has pendant, fragrant flowers with a boss of purple inside; great to walk beneath it when in bloom.

Yellow flowers? ‘Butterflies’ (below) with up to 16 primrose yellow tepals, is a particular beauty. 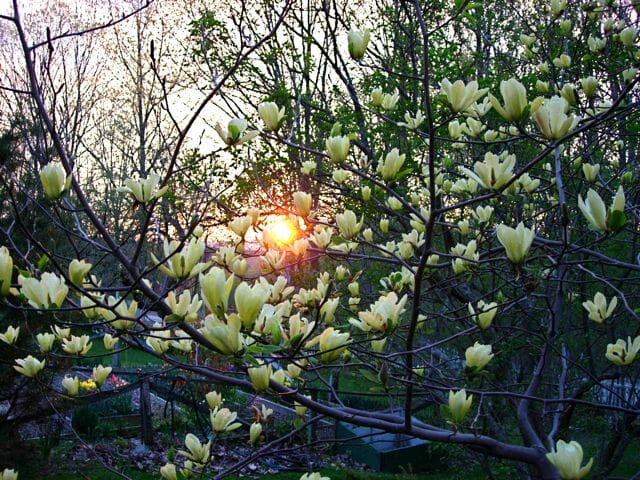 But what about a yellow-flowered variety that isn’t so rangy as some yellows can be, I asked? ‘Judy Zuk,’ a newer cultivar from a complex cross of M. stellata, M. liliiflora, and M. acuminata, is a very narrow and upright plant, making it perfect for tight spaces.

For tropical-looking foliage: M. macrophylla subspecies ashei (foot-long leaves and fragrant flowers, but on a tree to only 12 feet–photo at the bottom of the page); fraseri; tripetala (the so-called umbrella magnolia, which Scott Arboretum has grown since 1932). 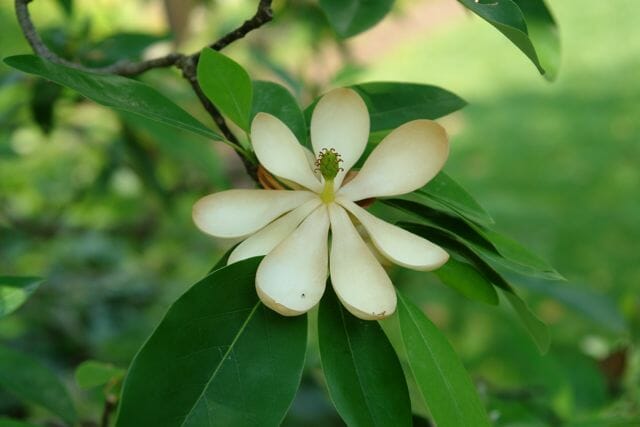 For evergreen foliage: grandiflora, and virginiana, too. (Depending on location, virginiana can be partially or completely evergreen in winter; ‘Henry Hicks,’ detail above, and ‘Green Shadow’ are inclined to be more so.)

About grandiflora types, in particular (which Andrew also admires for their showy seedpods): 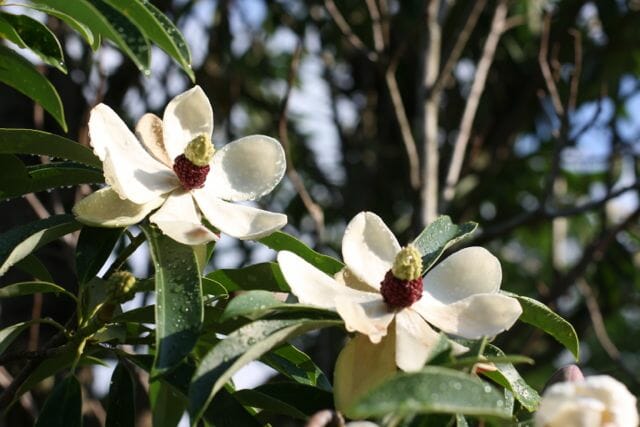 The latest must-have’s: New-ish Asiatic species, for gardens from Zone 7B or 8ish and milder, including Magnolia laevifolia (shrubby and evergreen, below); yuyuanensis, above, and lotungensis (both evergreen). 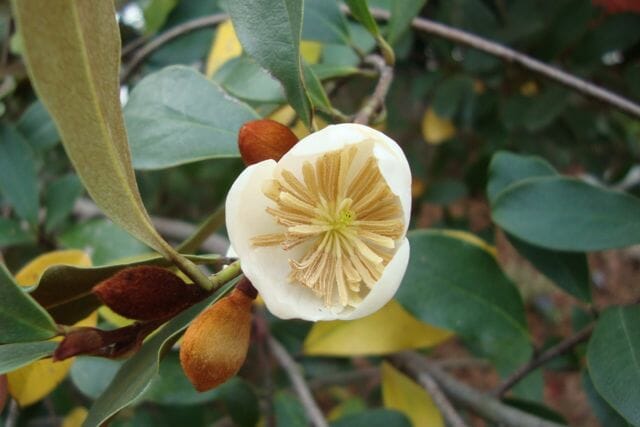 In the works from breeders: Look for a pink- or red-flowered Magnolia grandiflora, perhaps, based on hybridization efforts under way today, says Andrew. 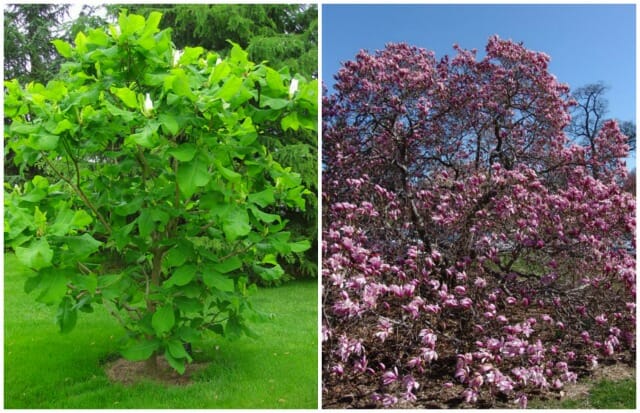 WHERE TO BUY choice magnolias like these by mail, if your local nursery doesn’t have them? The Magnolia Society has a list of vendors. (Above: ashei, left, and ‘Betty,’ one of the Little Girls, right.)

Categoriesdeciduous ornamental plants pruning trees & shrubs
Radio Podcasts
a way to garden podcast
Margaret's weekly public-radio show, from Robin Hood Radio in Sharon, CT, the smallest NPR station in the nation. Listen live at 8:30 AM EDT Mondays, to the replay Saturday morning, or stream the podcast anytime. LISTEN OR SUBSCRIBE FREE: Get the iTunes version; find it on the Stitcher app; or on Spotify, or your favorite podcast app. Browse past interviews below.
Podcast Archive

DO YOU RECALL the first plants that caught your eye–the ones that proved your gateway drugs into plantaholic behavior? Andrew Bunting looked out his childhood..
Read More
c
April 8, 2013
1 Comment

choosing and growing magnolias (a podcast)

THERE IS MORE THAN those admittedly extravagant flowers to recommend the Magnolia, though many of us think of them as just that: flowering trees. Not..
Read More
a
May 21, 2013
21 Comments

I OFTEN SAY how the only thing I know with certainty about gardening, even after 30 years of experience, is this: Things will die. Just..
Read More