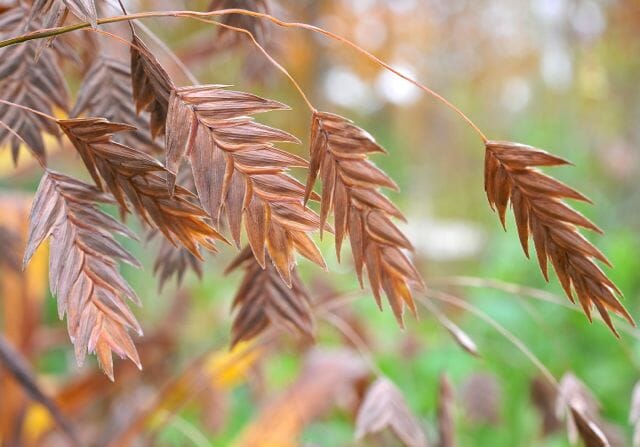 Northern (also called upland, or inland) sea oats is native to Eastern North America, says the Lady Bird Johnson Wildflower Center, specifically “from PA south to n. FL, west as far as s. IL, e. KS, and central TX,” and into northern Mexico. It’s easy to grow, and some birds enjoy its seeds, as do small mammals. Me, too.

Chasmanthium likes a semi-shady to shady spot where the soil is moist, and it can even take poor drainage. This is a low-maintenance plant suited to that hardest of spots–a shady slope—because sea oats forms strong, widening clumps, and also reseeds (some gardeners in certain locations say it does that too much; not true here). Don’t plant it in baking sun (I have had it do well in half-day sun where the soil moisture was good), and give it a bed of its own, or with other strong growers.

Its slightly blue-green foliage, which resembles a low bamboo’s and by high summer is more green than blue, sprouts early in springtime, reaching about 2 feet tall for me (and taller in some environments), arching and attractive. In fall the foliage goes bright yellow, at about the same time the seedheads (which start off green in summer, and fade to pale tan, bouncing all the while on wiry stems) go bronzy-coppery tones before turning brown. I leave the plants up in winter, to get the most from the display and any wildlife value, and clean them up during a thaw in February or March—the same way I treat bigger Asian ornamental grasses such as Miscanthus and Pennisetum.

Wondering what my other shade-tolerant ornamental grasses are? Gleaming golden Hakonechloa macra ‘All Gold’ is one (knee-high, part shade), and the thuggish green-and-white showy one called gardener’s garters that I’ve had 20 years and managed to keep in one little spot somehow, Phalaris arundinacea ‘Picta.’

Categoriesannuals & perennials shade gardening types of gardening
Tags
native perennialsnative plants
Radio Podcasts
a way to garden podcast
Margaret's weekly public-radio show, from Robin Hood Radio in Sharon, CT, the smallest NPR station in the nation. Listen live at 8:30 AM EDT Mondays, to the replay Saturday morning, or stream the podcast anytime. LISTEN OR SUBSCRIBE FREE: Get the iTunes version; find it on the Stitcher app; or on Spotify, or your favorite podcast app. Browse past interviews below.
Podcast Archive

I BROUGHT THEM HOME (WITH PERMISSION!) from Wave Hill, the public garden in the Bronx, a couple of decades ago: a few delightfully fuzzy, fat..
Read More
l
July 22, 2018
5 Comments

liverwort and pearlwort: 2 weeds of my driveway and cracks-and-crevices

ONE OF “perhaps the most primitive plants still in existence” and another that is a relative of Irish moss are two tenacious and odd-looking little..
Read More
w
May 28, 2017
331 Comments

when ornamental and edible merge: foodscaping, with brie arthur

SOME OF US are horticultural segregationists, designating one area as the “flower garden” and another as the “vegetable garden” or the “herb garden,” and never..
Read More