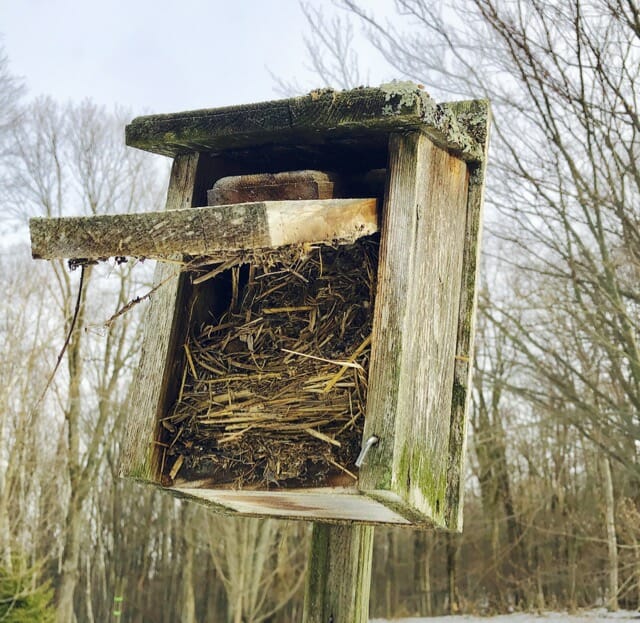 THE NEIGHBOR WHO HANGS BAGS of giant homegrown shallots on my gate also has rules and regulations. “Bluebird Rules and Regulations,” to be specific, as in: How to be a good bluebird landlord, minimizing hazards for the beloved birds with specific nestbox tips and tricks. 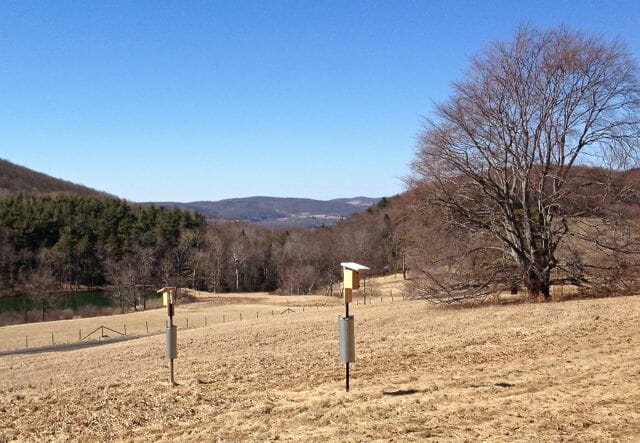 Deb, my “next-door” neighbor despite the uphill mile of dirt road between us, installed her first nestbox more than 20 years ago. Today, she has a trail of 24 boxes on her farm in Columbia County, New York, where she spends much of bluebird season (here, that’s March through August) “worrying over my little charges,” she says. 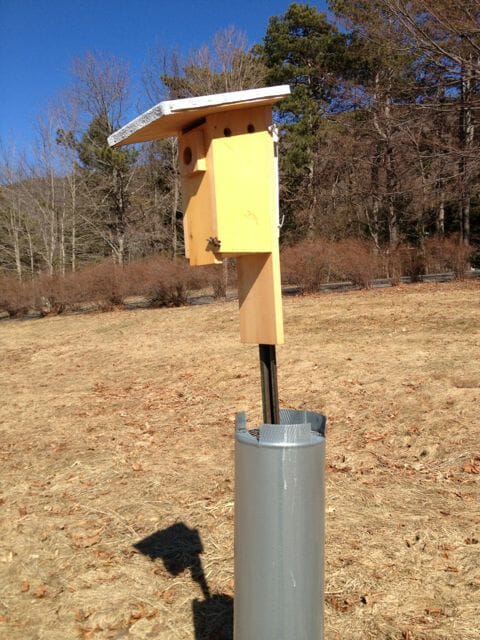 Q. Where did you learn to be a good bluebird landlord?

A. I rely heavily on Bet Zimmerman’s website Sialis.org and a wonderful little pamphlet called “Enjoying Bluebirds More” by Julie Zickefoose, and I always urge (implore, really) people interested in putting up nestboxes to read Bet’s page of bottom-line advice for new bluebirders. [Note: Sialia sialis is Latin name for the bluebird’s genus and species. Also: Zickefoose wrote a whole book on the subject called “The Bluebird Effect” in 2012.]

Q. So what’s the basic thrust of your Bluebird Rules and Regulations?

A. My boxes are installed to encourage successful nesting by the bluebirds by minimizing the many threats they face throughout their season. Before nesting season even begins, I make sure my boxes are cleaned from the previous season.

I also apply a coat of Ivory soap to the ceiling to prevent wasps’ nests, and I attach a bit of plastic netting to the inside of the box opening to serve as a “kerf” (a little ladder that fledging bluebirds can climb to reach the exit hole, photo below). 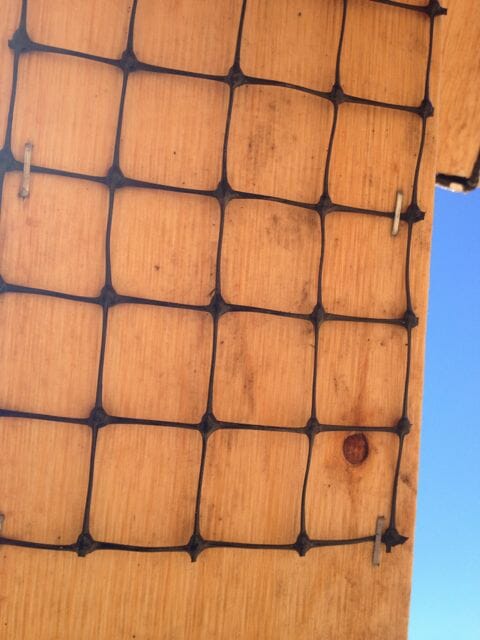 Then I do a little dance to bring good luck because, well, you never know.  Last week, as I was rubbing Ivory soap on the ceilings of my 24 boxes, I was thinking how amazing it is that these beautiful creatures survive at all considering the many threats they face while nesting.  Here are a few:

Q. What’s the key to success, if there is one? Sounds like a lot of possible trouble can occur.

A. The most important advice I can offer is to use a nestbox specifically designed for bluebirds, locate it properly and monitor it throughout the nesting season. [Get Cornell NestWatch’s plans for bluebird and other species-specific bird boxes.]

Spring comes, we hear that cheerful throaty song and we are moved to put up a home for the bluebird.  We rush to buy a birdhouse, nail it to a fence post and think we have done a good deed for the bluebirds. If your readers take away only one idea it is this: An improperly located and unmonitored nestbox will quickly become a bluebird death trap.

Q. How do we avoid that?

A. Bluebird Rule #1:  Resist all temptation to hammer a box onto the nearest tree, the side of a building or fence post. Doing so will almost certainly bring disaster to the bluebirds and heartache to you.

A raccoon, rat or snake can easily climb that wooden post to steal eggs and kill nestlings. Instead, your nestbox should ideally be mounted on conduit pipe that a raccoon can’t easily climb, fitted below with a baffle or predator guard (photo below; predator guards can be made from stove pipe) and located in an open, grassy area at least 100 feet away from shrubs or other natural “cover.”  Nestboxes should face away from prevailing winds, which generally means facing south. If you are lucky enough to have tree swallows, you will want to have a pair of nestboxes, back to back, about 15 to 25 feet apart (like in the top photo). 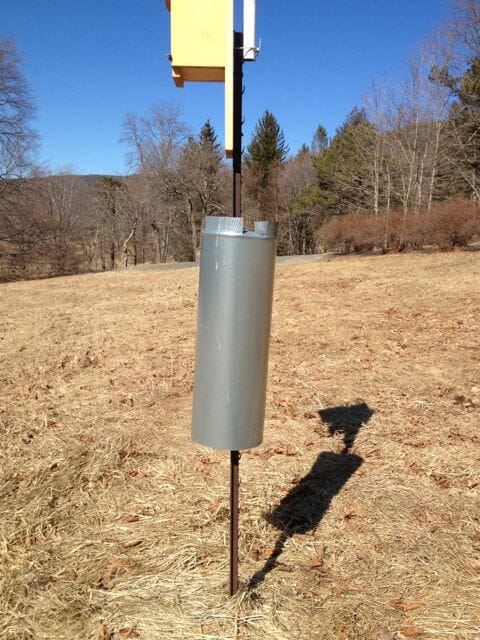 Then, follow Bluebird Rule #2: Do everything possible to prevent house sparrows from invading. Bet Zimmerman says on her website, “Successful bluebird landlords do not tolerate house sparrows…which are non-native nest site competitors. In my opinion, it is better to have no nestbox at all than to allow house sparrows to breed in one.”

I agree and I think it bears repeating: It is better to have no nestbox at all than to put one up where there are house sparrows, which are invasive alien predators and one of only a few bird species that are not protected by the Migratory Bird Act of 1918. (The European starling is another species not protected by this Federal law, but it is too big to fit into the entry hole of a properly sized bluebird nestbox. The house sparrow, on the other hand, is smaller than a bluebird and can easily fly into the box.)

Q. What are signs of house sparrow invasion?

A. The first is a trashy-looking nest that includes weeds, straw, and garbage in a big arc curving up the back of the box. The second–and most disturbing–sign is a dead bluebird inside the box. If you find a dead bird inside the box, chances are very, very high that it was trapped and killed by a marauding house sparrow. Bet recommends a number of ways to manage house sparrows.

Q. So besides proper siting, the right box, and reckoning with house sparrows, what other care is essential to being a good landlord?

A. Bluebird Rule #3: Once erected, monitor your nestbox. To quote from “Enjoying Bluebirds More:”

“A bluebird box put up and never monitored is like a letter never sent.”

In addition to monitoring for house sparrows, I also watch for blowfly larvae, which suck on nestlings during prolonged periods of stressful weather conditions like drought or rain. I even keep a spare dry nest on hand to swap out if a nest gets wet or infested (but I admit I do not recommend this for the inexperienced bluebirder). 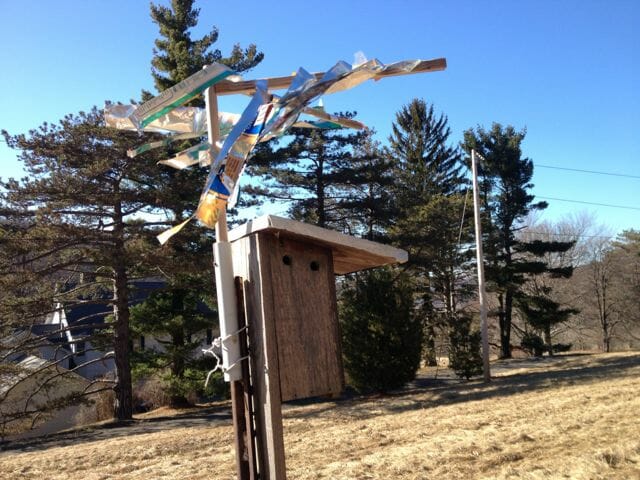 I also watch very carefully for the first bluebird egg. Once that first egg has been laid, nothing will keep the female out of the nestbox, so that is when I put up a sparrow spooker (above and below)–basically a stick with lots of reflective streamers hanging off it. The flapping, blowing streamers scare the house sparrows and deters them from entering. (If I were to put up the sparrow spooker before the bluebird lays her first egg, she too would be deterred from using the box, so I only put it up after that first egg is laid.) Really good instructions for making a sparrow spooker are here. 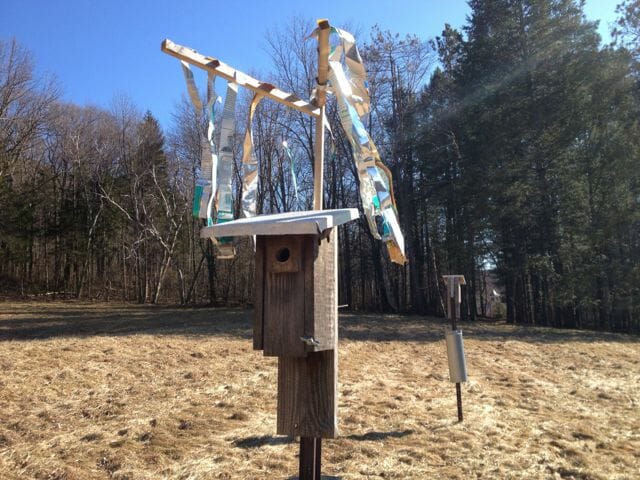 Q. Beyond the box regimen, are there other rules we need to follow?

A. The last (but not least) important advice I have is really up your alley, Margaret, and that is to create a backyard paradise by planning and planting for bluebirds.

To quote again from “Enjoying Bluebirds More:”  “What use is a bedroom if there is no kitchen?”

Bluebirds, like all other wild species, are under increasing pressure from habitat loss. Planting fruiting trees and shrubs helps the bluebirds thrive year-round. Because bluebirds have a fondness for ground-hugging prey, every time we mow our lawn, we create ideal foraging conditions for bluebirds. Water is also a great lure for bluebirds who love to bathe, even daily.

A. Nothing makes me happier than seeing fledglings leave the box for the first time. I wish all of your readers great success in their careers as bluebird landlords. And, may all your blues be birds!

extra: why are bluebirds blue? 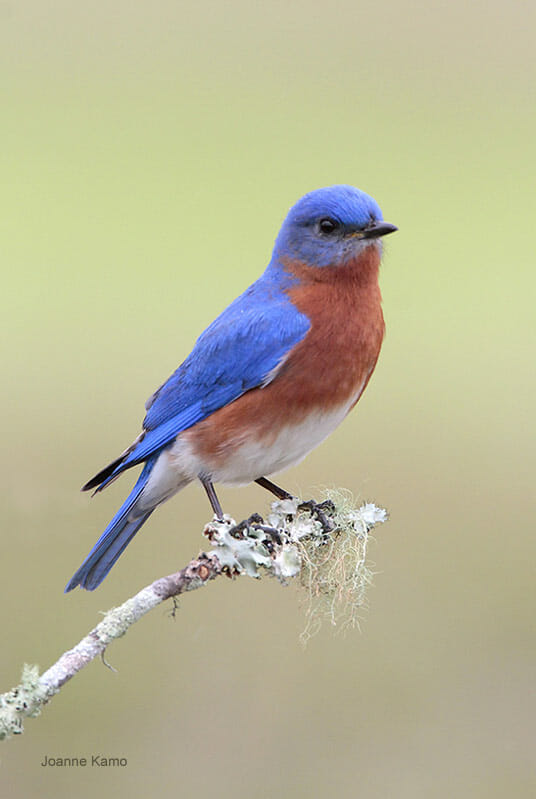 WHY ARE bluebirds blue? The obvious answer seems to be, “Because they have blue feathers,” but that’s not it, says a segment on the public-radio show BirdNote. It’s all about the feathers’ structure—and the light trick they create right before our eyes. Listen in to learn what’s going on. (Photo by Joanne Kamo courtesy of BirdNote.)

(All other photos except bluebird, above, and top photo of dirty box by my neighbor Deb, used with permission.)

Categoriesbird sh-t Featured Nature
Radio Podcasts
a way to garden podcast
Margaret's weekly public-radio show, from Robin Hood Radio in Sharon, CT, the smallest NPR station in the nation. Listen live at 8:30 AM EDT Mondays, to the replay Saturday morning, or stream the podcast anytime. LISTEN OR SUBSCRIBE FREE: Get the iTunes version; find it on the Stitcher app; or on Spotify, or your favorite podcast app. Browse past interviews below.
Podcast Archive

EVER WONDER ABOUT nest boxes–about which design is best, or where you should place them in the garden to attract bluebirds, perhaps, or some other..
Read More
b
September 26, 2013
18 Comments

YES, MANY HAVE FLOWN THE COOP—er, the local landscape—heading for milder spots to spend the offseason. But many other birds are arriving, settling in for..
Read More
b
May 8, 2013
12 Comments

YOU MAY HAVE SEEN bluebirds slugging it out with tree swallows over the season’s lease on a particular nestbox, or a robin flying by with..
Read More