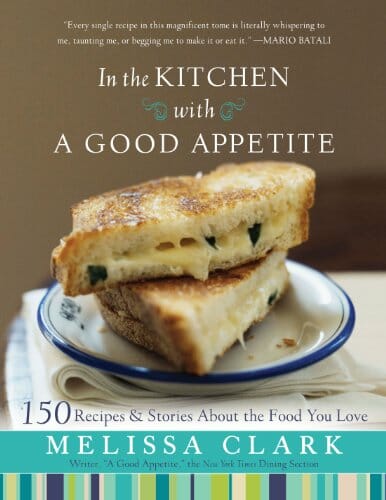 THE BIO ON THE BACK FLAP OF MELISSA CLARK’S NEWEST BOOK says she has written 29 in all, and for that feat alone, we should celebrate her today upon the publication of “In the Kitchen With a Good Appetite.” So celebrate we will: with a feast of good stories from the latest cookbook by Clark, a popular New York Times food columnist—and with a chance to win one of the two copies I bought to share with you.

Each of her 150 recipes is delightfully prefaced with what amounts to its provenance: a juicy and sometimes hilarious back story that Clark tells in as simple yet deft a fashion as the style of the dish that follows. I sat right down to chapters like “Better Fried” and “It Tastes Like Chicken” and “My Mother’s Sandwich Theory of Life,” the perfect mix of a good read and a good meal.

For me—a flavor-fearing kid who rinsed most of her entrees off at the sink conveniently positioned halfway between the Garland range and the family dinner table—Clark’s childhood tales are positively hair-raising: Summer vacations were spent touring France with her psychiatrist parents, gourmands determined to eat at every Michelin-starred restaurant there. Worse yet (or to Clark, more thrilling): The family rule was “try everything once” (presumably without running it under the faucet first).  And they meant everything: kidneys and foie gras aspic and raw quail eggs and vacherin, a real stinker among cheeses. 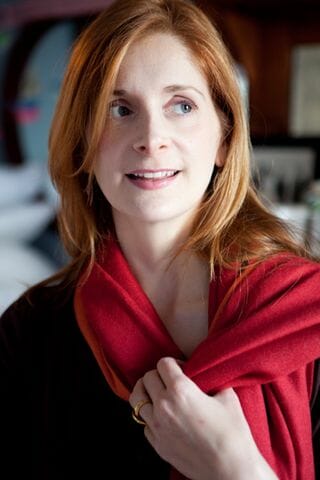 It wasn’t just Melissa’s parents, either, who stirred the epicurean-to-be in the child. There was the matter of Aunt Sandy of Flatbush, too, a real hostess-with-the-mostest, in whose home Melissa’s parents broke their Yom Kippur fast with on sweet and sour fish prepared in what Clark (left) describes as a “shimmering aspic….a pink-and-ecru mosaic.” (Almost Aunt Sandy’s Sweet-and-Sour Salmon is one of the 150 recipes that made the new book’s cut.)

Later, the chefs she has worked with or admired in her food-writing career have added their influences, helping shape the way that Clark cooks: with ease, and with welcoming flavors.

But even early on, Melissa had a discerning young palate: Early iterations of her mother’s zucchini latkes were fed secretly to the family dog—until finally, the young recipe tester determined, mom got it right (a “smidgeon” of rosemary was the secret, and no potato whatsoever, just pure zuke). That final victorious version: page 313.

I love the story of her first date with husband-to-be Daniel, who almost didn’t make it to Date 2 after confessing that he didn’t eat dairy products.

And one of a backyard pig roast with her ex-husband; her hairdresser, and the hairdresser’s husband and their twin toddlers, who persisted in saying “hi piggy, piggy” and “oink, oink” to the dinner-to-be. Oh, dear; no way to transform that meal-gone-wrong into a recipe for publication, no matter how much spin she added. Oven Roasted Pork Butt With Rosemary, Garlic and Black Pepper stands in nicely; no pit-digging required.

But to my ear the recipes that scream “cook me” loudest are Buttery Polenta with Parmesan and Olive Oil-Fried Eggs and Swiss Chard, or Crispy Tofu with Garlicky Peanut Sauce, or Healthy Homemade Cheddar Crisps. Chapter 2, “The Farmer’s Market and Me,” is a story of the author as determined hunter-gatherer, her harvest yielding the kind of cornbread that’s rich with real kernels, or raw kale salad with pecorino and chiles and breadcrumbs, or another salad of broccoli cured in spicy, garlicky toasted sesame dressing. I could go on; but better that you buy a copy (assuming you don’t win one, below).

How to Win a Copy of the Cookbook

YOU KNOW THE ROUTINE: You have to sing (or at least share) for your supper. Comment below to have a chance to win. But here’s this giveaway’s secret ingredient: Tell us a food memory that has stuck with you—good or bad, childhood or later. Melissa and I would love to know.

Categoriesedible plants
Radio Podcasts
a way to garden podcast
Margaret's weekly public-radio show, from Robin Hood Radio in Sharon, CT, the smallest NPR station in the nation. Listen live at 8:30 AM EDT Mondays, to the replay Saturday morning, or stream the podcast anytime. LISTEN OR SUBSCRIBE FREE: Get the iTunes version; find it on the Stitcher app; or on Spotify, or your favorite podcast app. Browse past interviews below.
Podcast Archive

MELISSA CLARK IS ONE OF US. The prolific cookbook author and “The New York Times” food columnist has a homegrown Dahlia (her young daughter); knows..
Read More
g
December 11, 2011
22 Comments

DEAR SANTA: I have been very, very bad. Such facts notwithstanding, I’m submitting a request for the following items, should you be so kind as..
Read More
c
November 28, 2020
644 Comments

YES, APPARENTLY more people gardened in 2020 than ever. And even before the holiday season was upon us, as it suddenly is, everyone was baking..
Read More