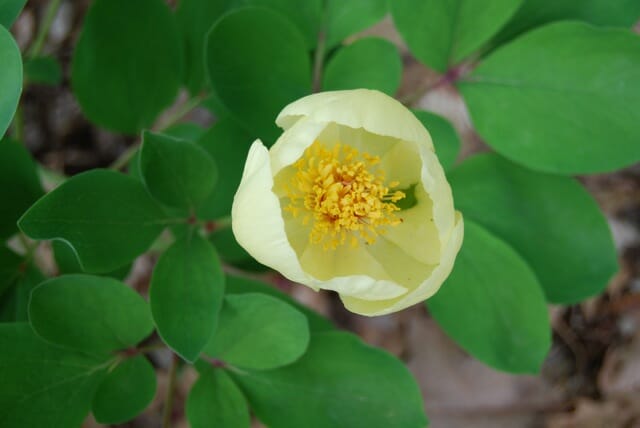 I HAVE A NUMBER OF SPECIES PEONIES, meaning NOT the big-flowered hussies of garden popularity but their wild, and more discreet, cousins. One such species has shown off so far this spring, with more kinds to come. Want to see?

Just to be clear: I love herbaceous peonies, or P. lactiflora, the blowsy, fragrant lovelies of most late-spring gardens. But I don’t grow them in my mixed borders; I relegate them to a cutting area, where I have enough for many, many vases-full (but not even one-twentieth of the number Martha has!). I might have 25 plants, all of them from our old friends the Klehms in Illinois, and they’ll bloom in another couple of weeks. But what I am loving at the moment in the garden (not the vase) are peonies the way nature made them.

Paeonia mlokosewitschii, more easily referred to as Molly the Witch, is a beautiful pale yellow, and enjoys a spot in a shady, woodland garden. My very big, old plant of nearly a decade ago, purchased at an auction at a botanical garden party where everyone had apparently had one too many cocktails and didn’t notice it (meaning: I got it really cheap), literally disappeared a few years back. Up and left, mystery never solved. But I had seedlings left behind, and friends have since brought more first-year plants that I have plugged in around the place among hostas and ferns and such, so they are coming on finally into adulthood. Molly the Witch gets to about 2 feet tall, and is lovely from its first hint of emerging foliage, tinged as it is with a little (or a lot) of red. Celebrating diversity, one species peony at a time.

Update: Another species peony bloomed in late May and early June, in case you’d like to meet it, too.

herbaceous peonies: planting, growing and even cut flowers that last, with jeff jabco

AMONG SHRUBS, the most common ones I hear people wondering aloud about are hydrangeas, hydrangeas, and more hydrangeas. But when it comes to questions about..
Read More
t
April 8, 2017
18 Comments

APPARENTLY I’M the kind of person people give tree peonies to, because over the years I have been gifted four of them by four different..
Read More
w
June 6, 2009
95 Comments

when the normally tough peony fails to bloom

W HEN I GET OVERWHELMED AS GARDENERS DO ABOUT NOW, I think of the peonies that grew in the narrow space between the flagstone walk..
Read More