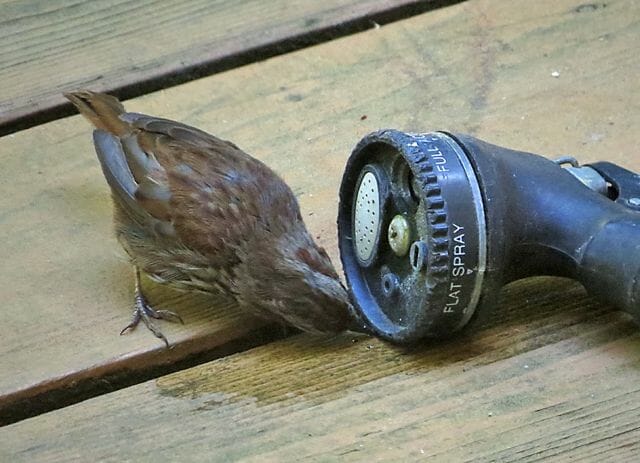 WONDER WHY the living alarm clock outside your open window—the one that’s been awakening you at 4-something A.M. since spring arrived—isn’t sounding? What suddenly happened to the insistent dawn chorus of birds; why isn’t everyone still singing? Turns out many of them are busy with other things, says Ellen Blackstone of the popular BirdNote public-radio show, our guide again for this latest installment in our collaborative series on understanding birds. What they’re up to–and what we gardeners can offer them right now:

“Like the week in Lake Wobegon, it’s been mostly quiet,” says Ellen. “For the most part, the birds have stopped singing.” Turning their attention away from establishing territories, finding mates and having families—what the songs were mostly about—they’ve shifted focus. “Some birds even lose the ability to sing after the breeding season is over,” she adds (learn more about that in this BirdNote show and transcript).

In the Q&A that follows, Ellen’s answers contain green links to audio files from BirdNote’s archive that you won’t want to miss. A recap of earlier stories in our series is at the bottom of the page, along with information on how to get BirdNote daily.

Q. So what are the birds doing as we enter midsummer?

A. Many birds–wrens, robins, and others–may raise more than one brood in a breeding season. Depending on what part of the country you call home, your local birds may still be feeding fledglings, or those young ones might be completely independent by now.

Young raptors–those owls, hawks, and falcons–are learning to hunt for themselves, like this great horned owl family in summer. Osprey juveniles also hang around with their parents for a while. (Photo above of juvenile osprey in back, adult in front, © Mike Hamilton.)

Precocial birds (we talked about them earlier in the series) are off on their own, independent.

Some species are already moving: Shorebird parents are halfway to their wintering grounds by now, and their young will follow soon, finding their way to the same general area, purely by instinct. Here’s the shorebird migration story.

Happily, many migratory birds will remain for a while longer. So what’s the best time of day to look for them? Generally, songbirds are most active in the early morning, taking advantage of the abundance of insects at that hour. Mid-day heat sends people inside, and birds take a siesta, too. And then, both birds and bugs rev up again in the late afternoon.

You’ll see hummingbirds throughout the day–they must feed constantly to maintain that speedy metabolism. Gulls and those opportunistic crows stay busy, too. How birds spend hot summer days.

some birds are molting 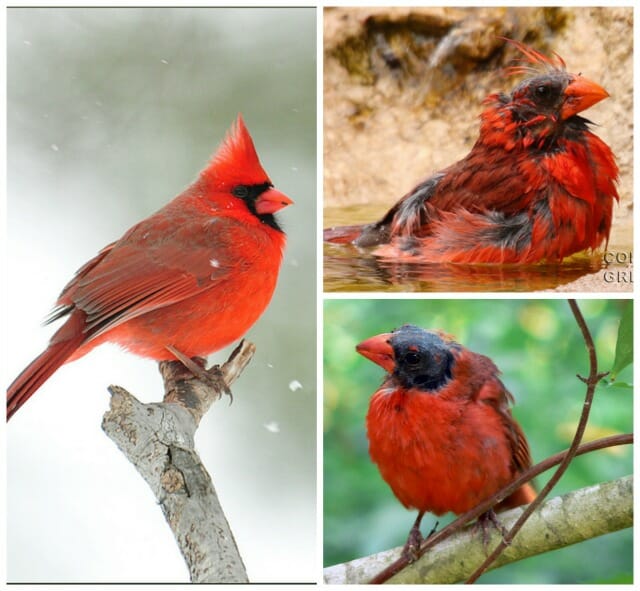 Q. Besides sounding different, some local birds even look a little different suddenly—or am I imagining that?

A. It’s true! This is the time of year when a lot of birds begin to look shabby.  Crows are missing feathers, mallard males look almost like females, and Northern cardinals and blue jays can be positively bald!

Cardinals are probably the most disturbing, because they go from gleaming all-red to patches of missing feathers to totally bald or even worse.  Don’t be alarmed! It’s their annual molt. Or one of two or more for some birds. (Photos, clockwise from left above, © Aditi the Stargazer; Greg Page; and Such A Groke.)

American Goldfinches lose their bright summer colors in order to blend in with their dull winter surroundings. They’ll molt again in the spring to show off those vivid yellow feathers.  (Photo of American goldfinch range, above, © Tom Grey.)

Q. Can we gardeners do something in particular for birds in summer? What would they appreciate most from us right now?

A. In some parts of the country, summer can be quite dry. With global climate change, droughts are becoming more frequent. Natural sources have dried up. Creeks run low or underground. Rain is scarce, and temporary puddles are gone. And birds need water–to bathe and to drink. The details on that.

Q. Any guidance on choosing a birdbath—I keep eyeing all the choices at the garden center.

A. A clean bath with sloping sides is a great way to start. Be sure to hose it out every day, otherwise the water will become stale and dirty, and mosquitoes may lay their eggs. OK, it’s a fact: birds poop in their baths. And a robin taking a bath can splash out half the water in one go. On a hot day, you may find yourself on frequent hose patrol, but the birds will love you for it. (Dark-eyed junco in birdbath, above, © Mike Hamilton.)

If you have the time and inclination, go one step further and offer two or three birdbaths. Larger birds need deeper baths, which might pose a danger to small birds. An inch of water–or even less–is ideal for small birds. A wide, shallow birdbath that deepens a bit in the center will suit a broad range of birds.

Some birds like to bathe closer to the ground. Certain shy birds will visit a birdbath set flat on the ground, but may shun a birdbath on a pedestal.  (Just keep an eye out for cats! When a bird is refreshing itself in the spa, it’s an easy mark.)

Want to really spoil your birds? Put out a mister, and watch the smaller birds–including chickadees, nuthatches, warblers, and especially hummingbirds–flit in and out. That’s your special treat for extending a hand to these tiny creatures. (Listen to, or read, about a magical warbler moment of this kind.)
(Top photo of bird seeking water, © Mike Hamilton. Rufous hummingbird in spray of water © Alandra Palisser.)

FIND ANSWERS to other bird questions in the BirdNote show archives, or on their FieldNotes blog.

Meantime, listen to BirdNote’s latest podcast anytime on the player below, or by visiting their website. Subscribe to the podcast or RSS, free. More than 100 public radio stations playing BirdNote are listed here; if you like what you hear, why not ask your local station if they’ll carry it.

IN CASE YOU MISSED anything from my ongoing series with the daily public-radio show BirdNote:

YES, MANY HAVE FLOWN THE COOP—er, the local landscape—heading for milder spots to spend the offseason. But many other birds are arriving, settling in for..
Read More
b
January 30, 2014
7 Comments