WHO WAS THAT eyeing some roadkill alongside a few turkey vultures, a bird almost as large as the more familiar-to-me scavenger, but without the raw-looking, naked red head? It turned out to be my first closeup view of a black vulture (above), not a rare species, but one that has been pushing farther northward in its range gradually.

Maybe because it wasn’t so common in the Northeast when I first learned to ID local birds, when I see vultures overhead, I automatically register: “turkey vulture.” Not so fast, Margaret; look again. (With help from my friends at BirdNote public-radio program and elsewhere, I did.)

That day last summer, I pulled over to watch the feast. From the close vantage point, the difference seemed pretty clear: red heads (the three turkey vultures) versus a gray one. One caveat I’ve learned since is that young turkey vultures have gray heads, too, but there are other differences to confirm an ID:

The gray-headed bird was only about two-thirds turkey-vulture size, and just so black. If you come upon turkey vultures on a sunny day, you realize that they are not really black (as they appear when overhead, or in low light) but dark brown, especially their wings.

Size perspective is tricky when vultures are soaring. From that angle, it’s the contrasting pattern of pale feathers against dark underneath that now helps discern TV from BV. The almost-silvery expanse stretching under much of the wingspan of the turkey vulture is much flashier than the grayish-white mere “fingertips” of the black vulture, like a pair of white gloves on an otherwise all-black underside. Plus, the black vulture’s tail is stubbier.

So what were the two species doing together? Turns out black vultures like to fly above the turkey vultures to see when the bigger birds catch a whiff of carrion, then follow them to the dinner table. The black species doesn’t have a powerful sense of smell of its own. Turkey vultures have one of nature’s best noses, and have even been known to sniff out leaks in natural-gas pipelines, like this.

Ever lie on the grass and watch the vultures soar, catching thermals above you? The poet Robinson Jeffers did, and wondered whether they were sizing up his carcass all the while, almost regretting what he had to tell the bird: “These old bones will still work; they are not for you.” His poem on the subject is a must-listen.

Why the naked heads? The vultures’ naked heads, whether red or gray, are an adaptation, the miracle of evolution at work. If you’re a bird whose table manners consist of sticking your head into the guts of carcasses, feathers up top are just too messy.

Indigestion? Never. If sticking your head in a carcass were not gross enough, there’s this: all that bacteria in the decaying dinner. No worry, since vultures are equipped with heavy-duty digestive systems laced with flesh-eating bacteria and stomach acids with super powers, my friends at BirdNote explain.

How big are vultures? Turkey vultures’ wingspan can approach 6 feet (black vultures more like 4½ or just under 5). If that sounds big, a bald eagle can be even bigger (to 80ish inches) and a golden eagle bigger still (up to like 86.6 inches, says Cornell’s All About Birds online). The largest wild bird in North America on that score? The California condor (wingspan up to 109ish inches, which if you’re bad at math is more than 9 feet across).

Think vultures are ugly, or prehistoric-looking, or really gorgeous? (I’m in the last camp.) Have a gander at this photo gallery of vultures around the world, called “Nature’s Cleanup Crew,” from BirdNote.

How long have black vultures been moving north? “The New York Times” reported the first confirmed nest of breeding black vultures in New Jersey in 1981; at least one scientific paper talks about the species expanding its territory since the 1920s.

They’re not the only species that has been on the move. I learned as I ricocheted around the internet and my bookshelf that the black vulture is, “part of a cluster of ‘southern species’—including red-bellied woodpecker, tufted titmouse, Northern cardinal, Northern mockingbird, and Carolina wren—that have pushed their ranges hundreds of miles north in recent decades.” That quote is from a 2011 story for Cornell Lab of Ornithology’s “All About Birds,” by Jack Connor, called “Vultures Riding North.” The suspected trigger? You guessed it: a changing climate and other human-influenced alterations of the environment. They follow the available food, and habitat. 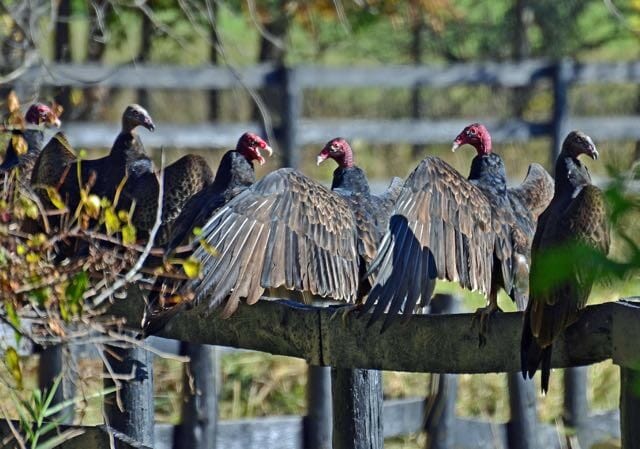 (Photos by Mike Hamilton, except group of turkey vultures by Rodney Campbell. Used with permission, via BirdNote.)

birdnote q&a: what senses do birds use to hunt?

INSTALLMENT NUMBER FIVE in my series of answers to your bird questions centers on how birds who hunt locate their prey, and also some important..
Read More
b
November 25, 2013
6 Comments

LIVING WHERE WILD TURKEYS, once in decline, have been extra-successfully repopulated, I get to regularly enjoy these comical big birds. Their crazy, descending gobble-gobble-gobble, and..
Read More
g
November 24, 2012
172 Comments

I WONDER MANY THINGS, and I’m always especially elated to check one unknown or another off the life list. “Why don’t turkey vultures have feathers..
Read More