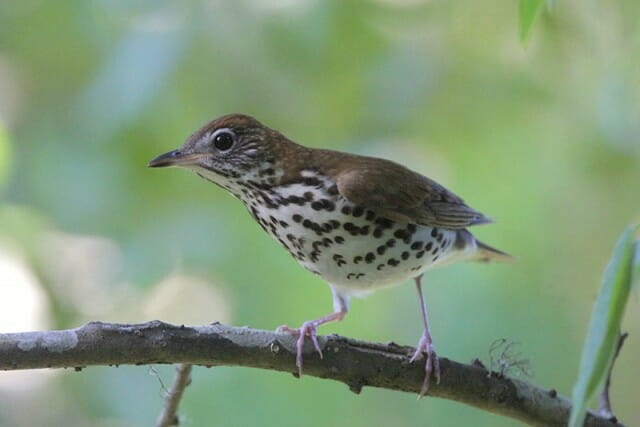 THE DAWN CHORUS is in full voice, but do you know which birds are even singing? In a quest to learn to bird by ear—identifying birds by their song, rather than sight—I’m working on some of the most haunting, distinctive sounds, the ones emanating from various thrush family members in the woods around me. Listen to them, and learn more about birding by ear, with help from my friends at the BirdNote public-radio program. (That’s a wood thrush, above.)

why do birds all sound different?

FIRST: the “why” question: Why are birds’ sounds so different, species to species? I asked Ellen Blackstone, our tour guide in the continuing series with BirdNote (browse all past installments).

As always, the answer is evolution: Songs evolved to match the bird’s habitat, she explained (learn more in this BirdNote segment). Each species adapted over time to succeed in communicating, despite the acoustical obstacles of its environment. Because high-pitched sounds have shorter wavelengths, they are more easily stopped by solid objects, and better sung from tree-tops. Explosive, low-pitched songs bounce better past solid obstacles.

The canyon wren’s song, for example–a series of distinct, long, higher-pitched notes–has ideal acoustics for bouncing off the tall rock faces and boulders of its habitat. Its cousin the marsh wren sings in dense stands of cattails, often from a low perch. That bird’s rapid, choppy, lower-pitched notes carry effectively there; the canyon’s wren’s style of singing would not, um, fly there. Listen to them both. 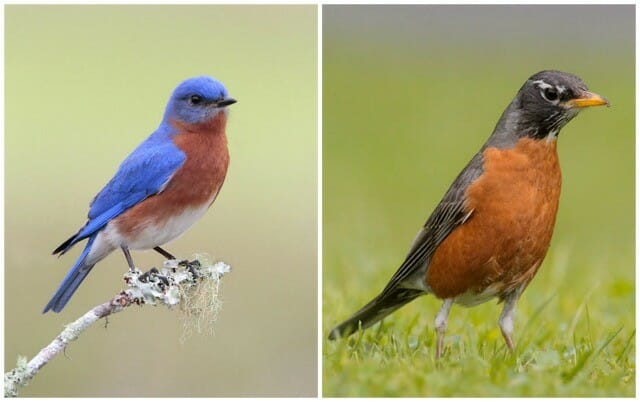 THOUGH they are technically thrushes, the Eastern bluebird and American robin have voices that are familiar to me, and I regularly see each bird in the garden, often year-round. But knowing their songs—the “cheery” sound the robin makes, or the bluebird’s burbling, as BirdNote calls it—didn’t help me much in identifying the other local thrushes, including the veery, wood thrush and hermit thrush. 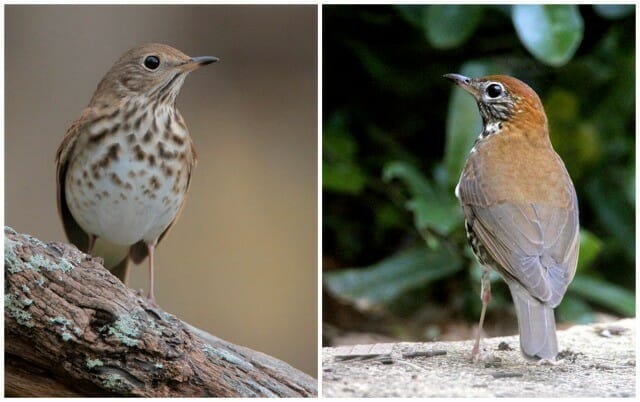 I have seen these birds, but never knew that certain striking songs I hear regularly—from ethereal to flute-like—were theirs. (Left to right: hermit thrush and wood thrush, above.)

Farther north and in some Western states, a Swainson’s thrush song might also be one I’d be trying to identify. The Swainson’s spirals upward, while the veery’s tends downward in pitch. The hermit thrush sings ethereal, paired phrases, long flute-like notes backed by complex, reedy phrases, says BirdNote. (Left to right: Veery and Swainson’s thrush, below.) 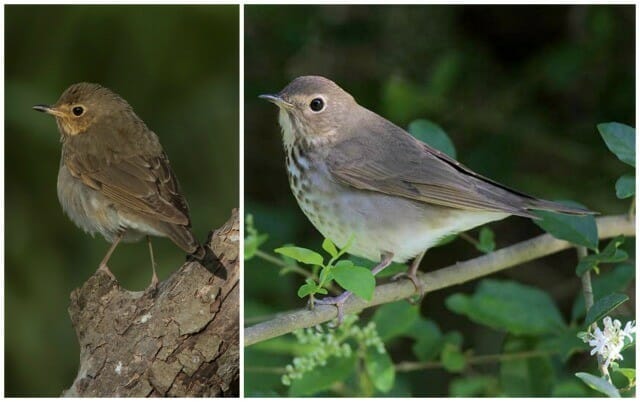 It’s different from the upward-spiraling Swainson’s, or the veery’s (often called “reedy,” and “ethereal,” with a cascading “veer” sound) and the hermit thrush (described as “haunting”): Listen to these three brown thrushes.

Oh, and then there is the thrush-lookalike ovenbird and Louisiana water thrush (both of which live in my area). But wait: Appearance and the one common name notwithstanding, those two aren’t thrushes at all, but warblers—and I haven’t dared try to learn to ID warblers by their voices yet.

What bird voices can you identify? Learned any new ones this year?

more on birding by ear

(All photos courtesy of BirdNote, and copyright Joanne Kamo; used with permission.)

SUDDENLY EVERYONE is waking up. Each morning as we run up to full-on spring, another bird voice seems to join the strengthening chorus. But what..
Read More
b
February 23, 2015
14 Comments

‘I AM HERE. THIS IS MY TREE.’ That’s the message delivered in fast, percussive style from the woodsy garden perimeter each recent sunny day, in..
Read More
b
February 4, 2015
5 Comments

birdnote q&a: the song sparrow, often ready with a tune

BETWEEN SHOVELFULS OF SNOW, a song. Not an alarm call, but a real bird song, up the path in range to catch my ear, but..
Read More