A MOURNING DOVE waddled across the backyard, squatted down, laid an egg, sat for a half-hour—and then, goodbye. So much for motherhood. Only 10 feet away, a phoebe kept constant guard, perched on a branch near the nest she’d built atop a stereo speaker on the porch. It all made me wonder: Which birds are attentive parents, and which not so much? (The peregrine falcon above looks pretty attentive, no?)

I asked my friend Ellen Blackstone of the BirdNote public-radio program, the tour guide for our ongoing series of bird stories. (Browse all past installments.)

‘IT’S FUNNY how some bird-moms are so involved,” Ellen replied. “Like the hummingbird that does everything from nest-building to incubation to feeding and tending the young, sometimes even having to drive the adult male away, because he is so…pesky.”  (Read: the flashily dressed male is handsome, but no help whatsoever.) That’s an Anna’s hummingbird caring for her young, above.

Of course, we’re just being flip—and what’s really going on is all part of complex evolutionary strategies for the successful perpetuation of each species.

A cowbird female doesn’t deposit her eggs in another species’ nest because she’s too lazy to build one of her own, but because it works—and has allowed the cowbird to achieve prolific annual egg production, remember?

The spotted sandpiper doesn’t just casually walk away after laying eggs, leaving the male to incubate them and tend the young for up to a month. She does it for the opportunity to breed with up to four males, each of which will raise a clutch, says BirdWeb (and she may even raise a final clutch herself).

Not to malign all sandpipers: In other sandpiper species, like the familiar killdeer, the female helps to raise the brood, and adult killdeer even feign injury to lure predators away from the nest.

This astonishing 2011 video from Cornell Lab of Ornithology gives a rare glimpse of a spoon-billed sandpiper nest in Russia, where male and female incubate the eggs on half-day shifts, before the male takes over (and the female departs) after hatching occurs.

IN SONGBIRDS, says Ellen, including our familiar bluebirds (that’s a Western pair, below), orioles, and many others, the female typically builds the nest (with male help in a wide variety of species) and incubates the eggs. But once the eggs hatch, the male and female together feed the young until—and often after—they fledge.

“It makes sense evolutionarily: by working together, birds can raise more young than if only one sex provided parental care,” Ellen explains. “This has led to a monogamous mating system in the majority of birds.”

One of the most familiar (and fast-paced) of all: the American robin, where male and female both feed and care for the offspring, and then do it all again with Brood 2.

Most birds don’t mate for life, but for only one season. And yes, says Ellen, there’s the occasional “cheating,” mostly to keep the gene pool varied.

That spotted sandpiper female may have headed off in search of more males, but in some birds, males mate with more than one female. In some of these “polygynous” species, for example red-winged blackbirds, the male may contribute little or no parental care to the young birds in his harem.

In ducks and chicken-like birds, the female provides all parental care–making the nest, incubating the eggs, and taking care of the young. These young birds are “precocial”—they feed themselves from the very beginning, thus making male parental care less important. (That’s a common eider brood, above, and their interesting story sheds light on another facet of how families work: whether birds can tell which other individuals are their relatives, or not.)

RAPTORS generally share parental duties in a surprisingly even manner, like this. In hawks and owls, for example, explains BirdNote advising scientist Dennis Paulson, both sexes construct the nest, and the female incubates, but the male feeds her throughout that period. Shortly after the eggs hatch, both sexes participate fully in feeding the young.

It’s no short-term commitment, either. Great horned owl parents’ offspring first leave the nest at about six weeks, but can’t yet fly, for instance. The young climb out onto branches near the nest before they begin to hunt with their parents, staying with the adults into late summer or early fall to gradually acquire survival skills.

And then there’s the truly woo-woo stuff, like the superb fairy-wren mom in Australia that teaches the secret password to her yolks—to the chicks in the eggs. How perfectly motherly of them, no, to sing a lullaby early and often?

(Photos courtesy of BirdNote and used with permission: peregrine falcon by Ruth Taylor; Anna’s hummingbird and Western bluebirds by Tom Grey; common eiders by Jack Stephens of High Arctic Institute; superb fairy wren by David Cook Wildlife Photography. Photo below of that abandoned mourning dove egg in my backyard, by A Way to Garden.) 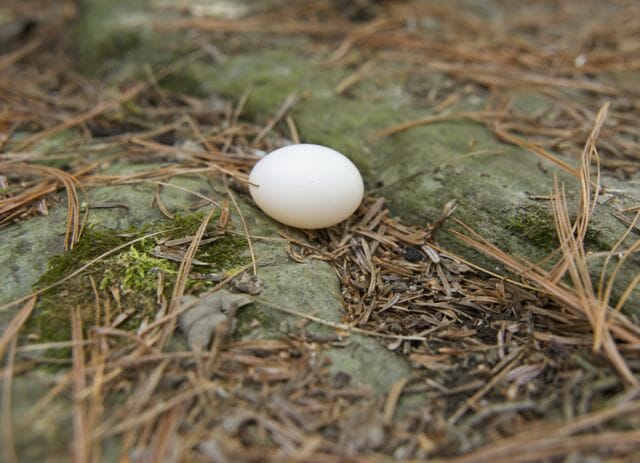 YOU MAY HAVE SEEN bluebirds slugging it out with tree swallows over the season’s lease on a particular nestbox, or a robin flying by with..
Read More
f
July 1, 2014
13 Comments