ARE YOU READY TO FLY? That’s the biggest question in early summer, when many young birds (including the barn owls, above) are leaving the nest. But how do they know when to make the leap? Ellen Blackstone of the popular BirdNote public-radio show is our guide again as we look skyward in this latest installment in our collaborative series.

“A few species–like great horned owls–shuffle tentatively along the nearest branch and practice flapping their wings,” says Ellen. “But some take the ‘big leap,’ and there’s no going back.” Which path a bird takes when fledging, she says, depends upon its species and the location of its nest.

In the Q&A that follows, Ellen’s answers contain green links to audio files from BirdNote’s archive that you won’t want to miss. A recap of earlier stories in our series is at this link; information on how to get BirdNote daily is at the bottom of this page.

the q&a on fledging, with ellen blackstone

Q. As with everything in science, and nature, there’s a word for each aspect of this baby-bird business. Can you brief us on the glossary of terms?

A. Let’s start at the very beginning. Some birds–many shorebirds, ducks, and quail, for instance–are precocial. They’re up and running as soon as their downy feathers are completely dry from hatching.

Most songbirds, woodpeckers, pigeons, and hummingbirds are altricial–they’re born blind and featherless (like the robin in the photo below). “Altricial” is from the Latin for “nurse,” which fits, because these helpless babies need a lot of tending before they’re ready to leave the nest.

When altricial birds do finally fledge, or leave the nest, they generally leave it for good. Although you may picture young birds being out and about in their first few days on the wing, then going back to their nest to sleep, that’s not the case. That nest is pretty messy by the time they leave. And besides – they’ve outgrown it! Instead, the young ones will often roost together at night, hidden from view.

Q. Let’s go through some birds by group, starting with the raptors. What’s their timeline for fledging?

A. Most hawks, eagles, owls, and other raptors begin nesting in early spring or even late winter, and for good reason. The raptors fledge their young by the time spring arrives and food is becoming plentiful.

When they’re about six weeks old, young Great Horned Owls clamber out of the nest to nearby branches, where they flap their wings and make short, cautious flights. All the while, their parents continue to feed them. They may even fall out of the nest tree, only to make their way back up.

Young Barn Owls, which hatch in a cavity or nestbox rather than a nest, actually do return to the nest cavity to roost at night. Like many human offspring, most owls will be supported by their parents for a long time after they have left the nest. It takes a long time to raise a raptor! Months, for many species.

Q. What about the shorebirds you mentioned, and other species who really “go for it”?

A. At the other end of the spectrum from the raptors are the precocial shorebirds, quail (those are California quail, above), and ducks. Baby shorebirds are generally ready to leave the nest within a day of hatching. Young quail all hatch at once and are ready to follow their parents immediately, in search of food.

Wood ducks may be among the most amazing (listen in). They, too, are ready to leave the nestbox or cavity within 24 hours after hatching. But watch that first step! According to Birds of North America, they’ve been known to jump–unscathed–as far as nearly 300 feet! If you have appropriate habitat, consider putting up a Wood Duck nestbox (a mere 4 to 6  feet off the ground will work; plans here). And do check out this photo blog of a wood duck family, making their exit.

Young seabirds known as murres often can’t fly when they leave their nests on high rocky cliffs. With the adults coaxing from the sea below, the young tumble off the cliff and land on the water. Built to bounce, the chicks pop up and join their parents who continue to feed them.  Probably the biggest first step of all is that of the Marbled Murrelet. This small seabird nests in a mature western forest, laying one egg on a tree branch. When the single chick is ready to fledge, it must fly to the ocean, as much as 10 or 20 miles!

Q. And what about some of our common songbirds, the ones we probably see most around our homes and gardens?

A. We’re probably most familiar with songbirds such as American robins. Perhaps you’ve been fortunate to follow a webcam or nestcam with nesting chickadees or swallows. (BirdNote’s list of favorite ones to watch.)

Robins spend about two weeks in the nest after they hatch, chickadees a couple of days longer. Tree awallows and bluebirds stay in the nest for as long as three weeks. Hummingbirds, too.

They all follow their parents around for several days after they fledge, begging for food like this. The exhausted parents must be relieved when the young can finally start to fend for themselves. 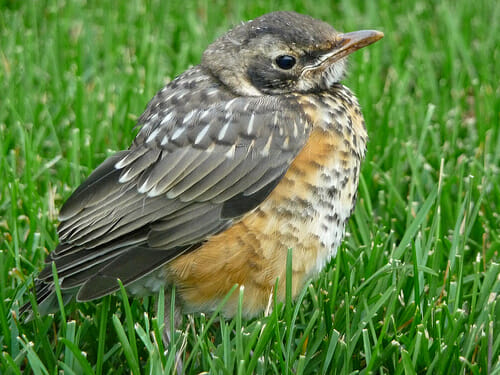 Q. I have to ask what to do about the inevitable baby bird found on the ground.

A. One thing is certain: American robin fledglings are clumsy fliers. You might even have found a nestling on the ground–too soon. What to do with that unfortunate bird?
There’s no truth to the rumor that if you touch a young bird or an egg that the adult will abandon the nest. Put the bird back in the nest if possible. Or put it in a small box or basket in the tree, where it will be safe from four-legged predators. The parents will usually continue to feed it until it’s truly ready to fledge.

Don’t assume that a bird left alone is necessarily abandoned or orphaned. It usually just needs some time and space until it can learn to fly high enough. Unless it’s obvious that it’s fallen, as I mentioned above, often it’s best to leave the bird alone–and most important: Keep your cat indoors.

When you know for certain that the bird is injured or abandoned, you can find a wildlife rehabilitator here.

Q. I know you always have some extra goodies to share. So?

A. Yes, we always have more stories, and these two are up close and personal:

Writer/artist/naturalist Tony Angell describes watching a young peregrine being coaxed from its nest by a parent with food – and finally taking off for the very first time.

FIND ANSWERS to other bird questions in the BirdNote show archives, or on their FieldNotes blog.

Meantime, listen to BirdNote’s latest podcast anytime on the player below, or by visiting their website. Subscribe to the podcast or RSS, free. More than 100 public radio stations playing BirdNote are listed here; if you like what you hear, why not ask your local station if they’ll carry it.

IN CASE YOU MISSED anything from my ongoing series with the daily public-radio show BirdNote, it’s all archived at this link–and below is just a sampling of the first episodes:

(Photos by Tom Grey, barn owls and quail, and by Ann McRae, nesting robins, and by Natsuko Nicholls, baby robin on ground, used with permission.)

birdnote q&a: what do ‘our’ birds do in winter?

BIRDS ARE IMPRESSIVE in the ways they cope with winter, whether by fleeing or toughing it out like the great horned owl (above) on its..
Read More
b
July 28, 2013
18 Comments

WONDER WHY the living alarm clock outside your open window—the one that’s been awakening you at 4-something A.M. since spring arrived—isn’t sounding? What suddenly happened..
Read More