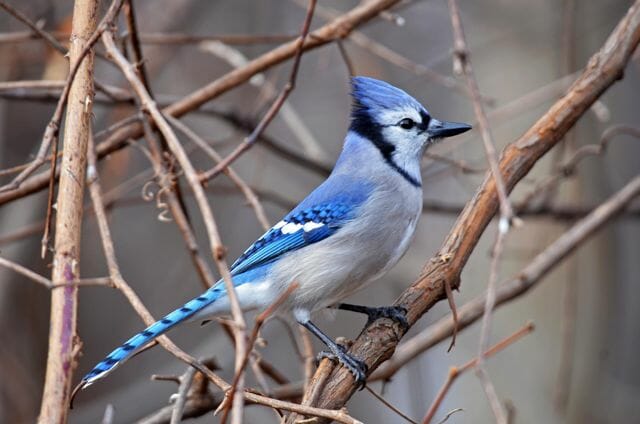 EVER WONDER WHY BLUE JAYS are so loud? This insight might explain it:

“They’re related to crows,” I said on the phone one morning to a friend, who was noting both the large numbers of Cyanocitta cristata this winter—and how much loud-mouth behavior that’s amounting to at his feeders.

“Really?” he said, and then I thought what I often do when a “fact” pops out of my mouth so quickly to the blank look of my audience: I momentarily wondered if I’d made it up. Grabbing my Sibley’s guide, I was reassured to see I hadn’t: Family Corvidae—the jays, magpies (speaking of mouthy birds), crows and ravens.

“Yes,” I said, with renewed confidence. “Corvids.” As Sibley says, “relatively large, sturdy songbirds with thick bills, strong legs, and loud voices,” plus “noisy and aggressive,” and “rather social and usually travel in groups.” The Cornell Lab of Ornithology website mentions tight family bonds, intelligence, and complex social systems when it describes the blue jay—again, like crows.

Then I emailed Ellen Blackstone of the BirdNote public-radio program, who has been the tour guide for our ongoing series of bird stories here on the blog. (Browse all past installments.) Before I spouted off another “fact” I was unsure of—that blue jays were having an uptick in sightings that winter, something I swore I’d read somewhere—I wanted to be sure.

Yes, she said, and thankfully knew the link I was thinking of: The annual Winter Finch Report by Canadian Rob Pittaway that year had predicted more jays on the move from Canada. Pittaway includes blue jays in his report because they may move for the same reason purple finch, pine siskins, redpolls and the other winter finches do: not enough tree seeds and nuts up north in a given season to eat. (Update: The 2018-19 Winter Finch Report again forecasts an uptick.

Less mast any winter to eat up in Canada, more jays (and winter finches) on the move, in search of food. Blue jays love acorns, in particular.

“I grew up with these guys and miss them,” typed Ellen from her Pacific Northwest perch. These days she’s more likely to encounter the Steller’s Jay (above) she says, and this BirdNote show compares the Eastern and Western species—and explains how they behave like big-mouth mobster types at the sign of a predator. That behavior, by the way, protects not just the jays but other birds, who benefit from the alarms and subsequent mobbing of invaders.

If asked what a blue jay sounds like, I’d be quick to answer: a loud, insistent jeer. In that case, my answer would have to be marked as incomplete, Ellen reminds me. The blue jay actually has a number of different vocalizations, including these–which prove it can even mimic a red-tailed hawk if the going gets tough. Impressive.

Meantime, listen to BirdNote’s latest podcast by visiting their website, where you can subscribe to the podcast or RSS, free. More than 100 public radio stations playing BirdNote are listed here; if you like what you hear, why not ask your local station if they’ll carry it.

(Photo at top of page by Rodney Campbell. Steller’s jay by Tom Grey.)

THEY’RE THE McMANSIONS of bird nests, though I suppose not necessarily as luxurious as that as just plain big—too big to fit into the first..
Read More
b
May 23, 2013
15 Comments

PERHAPS NO BIRDS are more familiar than crows and ravens—but which is which in these similar-looking members of the genus Corvus? And who’s smarter? Ellen..
Read More
b
July 28, 2013
18 Comments

WONDER WHY the living alarm clock outside your open window—the one that’s been awakening you at 4-something A.M. since spring arrived—isn’t sounding? What suddenly happened..
Read More