SUDDENLY EVERYONE is waking up. Each morning as we run up to full-on spring, another bird voice seems to join the strengthening chorus. But what are birds vocalizing about, and why—and how can we learn to tell who’s saying what, even when they’re out of sight? In Part 7 of our popular ongoing series, Ellen Blackstone of the BirdNote public-radio program helps us understand what’s going on as we look—or turn our ear—skyward.

“You may not (yet) know the difference between a bird’s song and its calls,” says Ellen, “but the bird sure does. It’s often sending a special message to another bird–or other birds–of its species.”

In the Q&A that follows, Ellen’s answers contain green links to audio files from BirdNote’s archive that you won’t want to miss, since we’re talking sound this time. I recommend making a big pot of tea, and planning to spend some time with these answers and the corresponding sounds–it’s like a beginner’s course in birding by ear. Enjoy.

A. Naturalist and writer Jules Evens, explains: “Bird song, usually produced by the male, is an advertisement of territory and breeding availability, and, in most species, is limited to the breeding season … to stimulate and synchronize sexual behavior (seduction), and to proclaim vigor and dominance. …

“Bird calls tend to be unmusical, acoustically simpler, and less complex than the proclamatory songs, and they serve a variety of practical, non-sexual functions … to communicate whereabouts between pairs or among members of a flock, warning sounds, sharp notes to intimidate or drive away enemies, and begging pleas.”

Listen in: Here’s some out-loud proof of the difference.

Q. Acquaint us with some familiar voices. 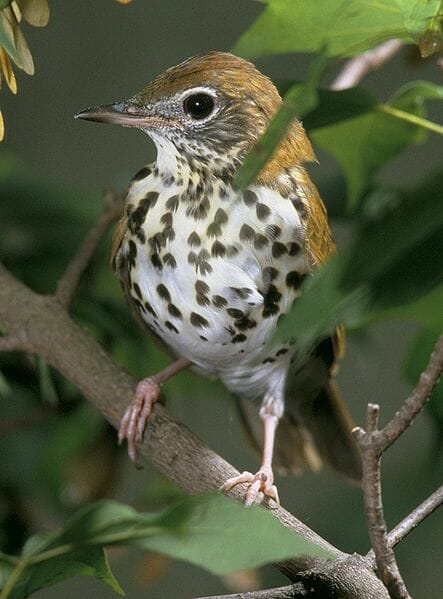 A. Among the most beloved songs is that of the wood thrush (above, photo by Steve Maslowski). Henry David Thoreau said: “It lifts and exhilarates me. It is inspiring. It changes all hours to an eternal morning.” Donald Kroodsma says of the same bird, “we’re hearing a little bit of magic.” Could any more be asked of a bird’s song? Have a listen.

If there’s a cat or an owl or other predator nearby, it’s likely to add a few more “dees”–the more danger, the more “dees.” Listen to both songs and calls, then learn about chickadee codes.

Everyone knows the “cheerily-cheerily” song of the American robin–quite often the first song of the morning and the last of the evening (unless there’s a mockingbird in the neighborhood, when all bets are off). But the scolding or alarm call of that same robin (as in the photo, by Tom Grey) can set even a human on edge. Check out the robin’s songs.

the seasonality of bird song

Q. Do some birds sing year-round?

A. Given that a bird’s song is mostly about territory and seduction (as Jules Evens calls it), you’ll generally hear it only in spring and early summer, when the birds are nesting. In some species, the brain actually changes and the bird is physically incapable of singing during the fall and winter.

A few birds sing throughout the year, although not as much–notably the winter wren and its cousin, the Pacific wren, the Northern cardinal, and the song sparrow. Oh, and that Northern mockingbird!

Q. When I read guidebooks describing birdsong I often think that it’s got its own language, like the “notes” experts say they taste in fine wines. (I can’t understand those, either!) Can you explain some of what I’m listening for?

A. Whether it’s a song or a call, you may be able to identify a bird by its notes, even if you can’t see it. Listen for a raspy sound, or a trill, or a flute-like and upward-spiraling quality, for instance. Here are examples, in an audio file.

A field guide often describes a bird’s vocalizations with these sorts of words, which may help you identify that hidden bird. A chipping sparrow’s song is often described as having dry notes.  Meadowlarks–both Eastern meadowlarks and Western meadowlarks–are said to have clear, liquid songs. That’s a far cry from the metallic songs of the Eastern towhee and its Western cousin, the spotted towhee.

Q. What’s behind the different sounds—how did they evolve to be distinct?

A. Different sounds travel better in different environments. Some birds sound the way they do because of where they live. The marsh wren makes its home in dense stands of cattails, often singing from a perch down within the reeds. Its rapid, choppy, lower-pitched notes carry effectively there.  The olive-sided flycatcher, for example, sings while perched atop a tall tree, and its high-pitched, whistled song carries at least half a mile through the open air. Sharp, clear notes are ideal for a tree-top singer. Listen to how bird songs reflect habitat.

A. Yes, one more way to identify a bird by its song or call is to use Roger Tory Peterson’s vocabularies. His Field Guide to Birds of North America translates the song of the Eastern Towhee as “drink your tea.” Can you hear it?

One easy call to learn is that of the killdeer, a plover, not a songbird but a type of shorebird often seen in pastures or parks and on lawns and golf courses. It’s another bird that calls its own name.

A congenial note is heard from the chestnut-sided warbler (top photo by Tom Grey), who supposedly sings, “please please pleased to MEETcha.” And two sparrows, the White-throated Sparrow of the East and the White-crowned Sparrow of the West, have their own distinctive songs. You’ll hear the White-throat sing–depending on your nationality–either “old Sam Peabody Peabody Peabody” or “oh, sweet Canada Canada Canada,”  while the white-crown sings–in several different dialects, depending on location!–“see me, pretty pretty me.”

Q. What bird sings the most, or loudest?

A. The winner is the red-eyed vireo (above, photo by Tom Grey), hands down. One was heard to repeat its song over 22,000 times in ten hours! Listen.
Q. I can’t help but ask about that most raucous of talkers, the raven.

A. You may not know that besides their familiar loud vocalizations, ravens also have a love song—also called a comfort sound—heard between pairs and even from young nestlings who have just been fed. People are often taken aback to think of crows and ravens as “songbirds,” but the raven is our largest songbird.

Q. Where can I get more help to learn about birds’ vocalizations?

A. The BirdNote store has CDs to help you learn the songs and calls of birds.

Search for songs and calls of specific birds at The Macaulay Library.

Cornell’s All About Birds has a summary–complete with sounds–of most of America’s birds.

THE NEXT INSTALLMENT of my series in collaboration with BirdNote, providing answers from among the 150-plus questions you asked me recently, will be a month from now. If you have questions you’d like us consider, ask them in the comments below.

You may find answers to other bird questions in the BirdNote show archives, or on their FieldNotes blog.

Meantime, listen to BirdNote’s latest podcast anytime on the player below, or by visiting their website. Subscribe to the podcast or RSS, free. More than 100 public radio stations playing BirdNote are listed here; if you like what you hear, why not ask your local station if they carry it.

IN CASE you missed anything from my ongoing series with the daily public-radio show BirdNote:

THE DAWN CHORUS is in full voice, but do you know which birds are even singing? In a quest to learn to bird by ear—identifying..
Read More
b
June 14, 2013
5 Comments

THEY’RE THE McMANSIONS of bird nests, though I suppose not necessarily as luxurious as that as just plain big—too big to fit into the first..
Read More
b
February 4, 2015
5 Comments

birdnote q&a: the song sparrow, often ready with a tune

BETWEEN SHOVELFULS OF SNOW, a song. Not an alarm call, but a real bird song, up the path in range to catch my ear, but..
Read More