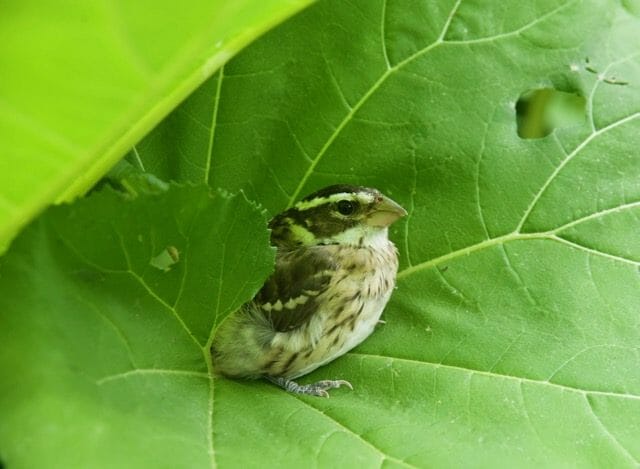 NOBODY’S GOING TO STARVE around here, even if I take down the bird feeder from late March to Thanksgiving or so. That’s my usual routine, aimed to discourage local black bears from touring the garden unexpectedly. But one recent year I was frankly hungry for the continued amazement the feeder provides for me, and broke my winter-only rule, leaving up one feeder a little longer than usual.

I was so glad I did.

Even one small feeder (below right)—the deal I struck with myself—provided an informal census of who was around, which on the spring end of things hints at who’s nesting in the garden, and where. I watched where incoming birds arrived on the perches from, and where they headed back to after dining. 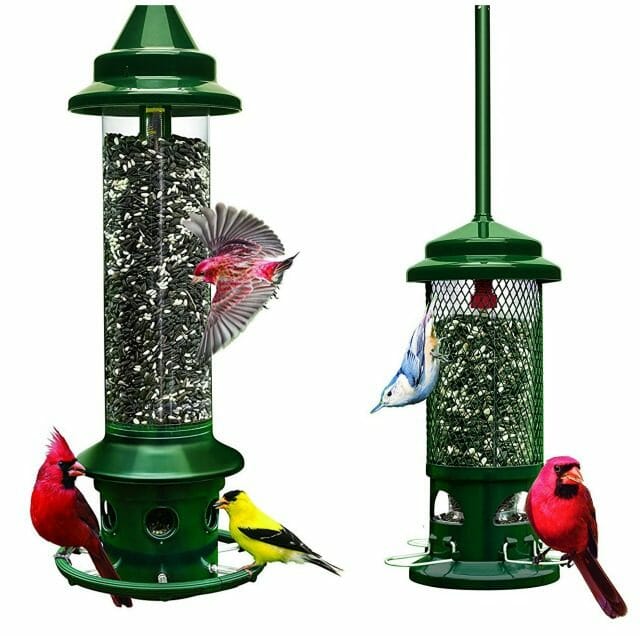 Rose-breasted grosbeaks can usually be heard, and glimpsed, at the garden’s woodland edge, but with a feeder up I was up-close host to many of them all season (including the photogenic young one, above). Tufted titmice are a familiar year-round bird, joining mixed flocks with chickadees, nuthatches and even woodpeckers here in winter, but often I only see the occasional individual or pair in the warm months if no feeder is out. Early that summer I was treated to a whole family’s impressive aerobatic antics, noisily chasing one another through the garden, back and forth to the feeder, since what seemed to be the progeny from a very successful nest (they can have from 3-9 eggs per clutch) had all taken to the air. Fun.

It’s also a treat to witness the pecking order played out at the feeder among individuals of a single species, or between different species (the red-bellied woodpeckers win here, though blue jays when around are pretty bossy). A primer from Cornell on pecking order and feeder behavior.

The feeder I chose (more on it below) shuts when a heavier animal tries to latch onto it (you know who I am talking about). The seed chamber is also cleverly ventilated, so hot, humid weather or a wet season doesn’t result in gunked-up seed in the tube. It’s small enough to be very easy to clean regularly, to prevent transmission of disease (such as house finch eye disease) from bird to bird. 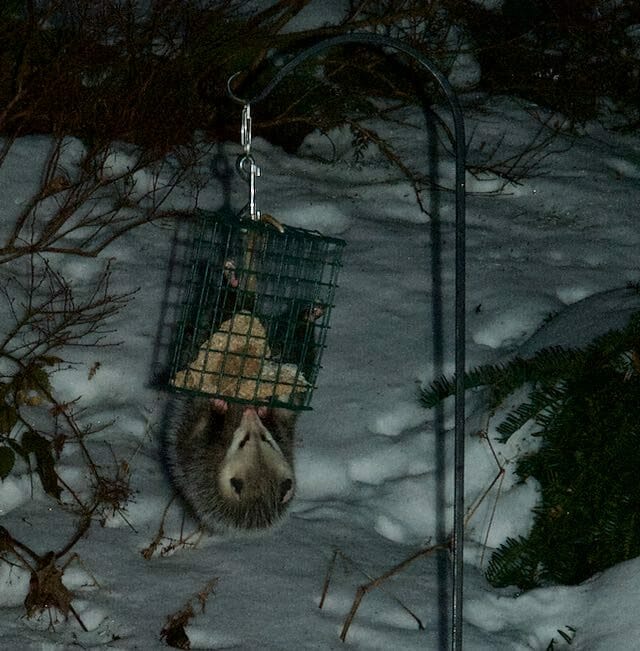 Years ago I switched over from filling the tubes with sunflower seeds in their shells, to sunflower “hearts” or “chips,” minus the shells. The shells (and also roots of live sunflower plants, by the way) are allelopathic, meaning they contain a chemical that inhibits the growth of many other plants. Besides creating a bald spot in the garden where they fall, there is the issue of the debris. Though I can rake them up regularly, the shells are not a good addition to compost—their anti-plant effect can linger.

Shelled seed is much more expensive, but you’re not paying for waste, plus my local farm-supply store has pre-season promotions on it every fall at a good discount, when I buy maybe ten 40- or 50-pound bags.

I also feed big hunks of suet fresh from the local butcher, stuffed into large cages, but only during cold weather. Raw suet in the heat? Not a pretty picture. (The local opossum love the suet feeder, too; above.) I used to feed thistle seed as well, in special feeders, but I get so many kinds of finches at the sunflower feeders I no longer bother. 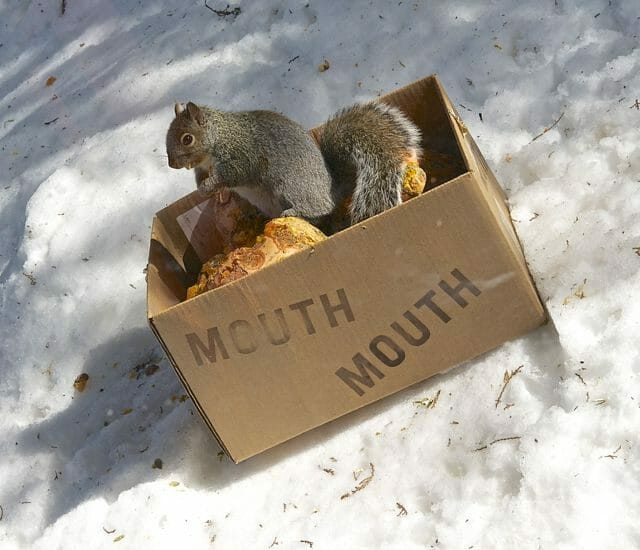 Whatever feeder and food you choose, remember: Position feeders either closer than 3 feet or farther than 30 feet away from the house and especially from glass expanses of windows or doors, to prevent confusing visuals that lead to fatal window strikes by incoming birds.  Choose a spot close to the safety of evergreen cover, if possible, or at least twiggy shrubbery, but not so close that those incessant gray furbearers can leap across and have at it.

Do you feed in the growing season, or in winter, or at all?

FEEDERS ARE no substitute for diverse habitat filled with plants that foster delicious insects, fruits and seeds. But feeders can deepen our connection with birds, and also supplement natural foodstuffs in the toughest months, especially.

I have been feeding each winter for 30 years, and gone through a lot of seed and devices—especially ones that claim to be squirrel-proof, the grail of any bird lover’s feeding dreams.

In the last five years, I’ve settled on one brand of feeder—Brome—that I think has the best combination of features, including a lifetime warranty and again, that ventilation feature and more. I have both the little ¾-quart one mentioned (photo at left), and one that looks identical but holds 2.6 pounds (the Legacy) as well as two of the larger models (1.4-quart and 3-quart capacity), and a couple of big suet baskets (not by Brome).

Nothing can stop squirrels from lunging toward and hanging on any feeder (especially if it’s not sited properly), but with the Brome design, the seed ports will be covered when their weight slides the outer housing down over them. Note: a chipmunk’s weight doesn’t do the trick, so those adorable demons stuff their cheeks if you feed in summer, when they are not tucked in napping; not a winter problem here mostly, though.

(Disclosure: As an Amazon Associate I earn from qualifying purchases.)

Categoriesbird sh-t Featured
Tags
native plants
Radio Podcasts
a way to garden podcast
Margaret's weekly public-radio show, from Robin Hood Radio in Sharon, CT, the smallest NPR station in the nation. Listen live at 8:30 AM EDT Mondays, to the replay Saturday morning, or stream the podcast anytime. LISTEN OR SUBSCRIBE FREE: Get the iTunes version; find it on the Stitcher app; or on Spotify, or your favorite podcast app. Browse past interviews below.
Podcast Archive

A FLOCK OF ROBINS visited my garden recently for a three-day-long field day. By the time they decamped, I was down about 40 mature winterberry..
Read More
b
September 7, 2013
18 Comments

LEAVING SO SOON? That’s the lament for hummingbird-lovers (and who isn’t one?), as summer fades and the tiny creatures often move along southward. Ellen Blackstone..
Read More
h
November 14, 2015
5 Comments

how birds follow the food, plus best practices for bird-feeding, with aubudon’s eric lind

YOU PROBABLY ENJOYED brief recent visits from unexpected or even unfamiliar migrant birds, stopping by on their way to somewhere a little cozier and where..
Read More