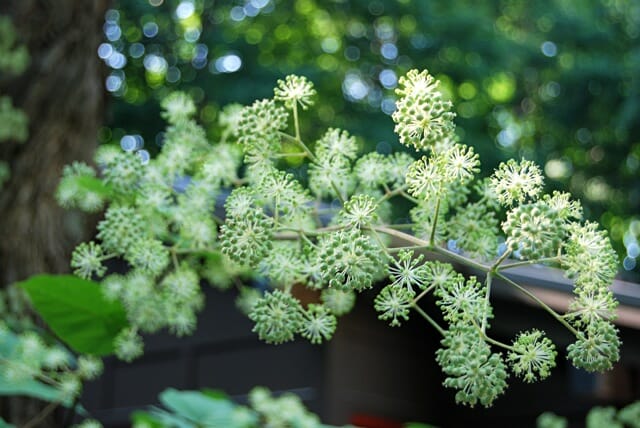 IF YOU LIKE YOUR PERENNIALS SIZE XL, the genus Aralia is hard to overlook. And like shift workers, its members are just going to the job when everyone else wants to pack it in and crawl back into bed. Yes, the rest of the garden is really starting to crumple and yawn and otherwise express its exhaustion, but here come the aralias (including Aralia cordata, above). 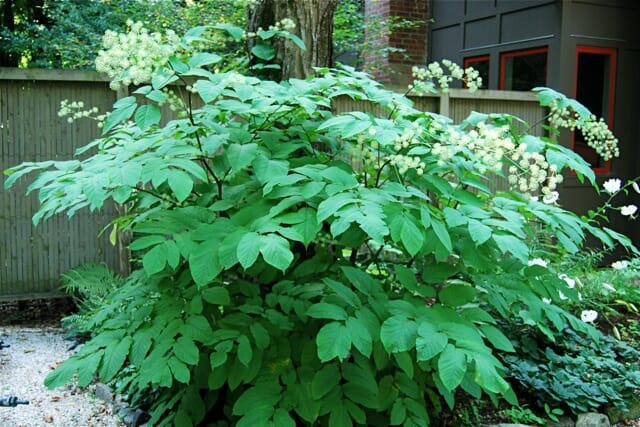 Yes, Margaret, that’s A. cordata growing outside your office doorway, though for years I called the poor oversized thing A. californica, a botanical malapropism of jumbo proportion since that Western native (also known as elk clover) is similar looking. Sorry, big guy.

Good thing I never trust myself and always look things up before I say them out loud, and this time that included emergency SOS’s to the two most Aralia-friendly people I know, Ellen Hornig (formerly of Seneca Hills Perennials), and Dan Hinkley, the founder of the original Heronswood Nursery who collected a particularly nice form of A. cordata on one of his explorations in Asia years ago, and has written about the genus in his book “The Explorer’s Garden.”

No, Margaret, they said patiently; not Zone 8 A. californica, silly girl; A. cordata, probably one from Dan’s original stash (mine is about 8 feet high and wide). To make things worse there’s another one occasionally listed in the catalogs that starts with a C, A. cachemirica, and frankly they are all big and doing their thing now and if you don’t label your plants, as I didn’t mea culpa and total hubris, how can you expect to remember which A.c. it is years later? 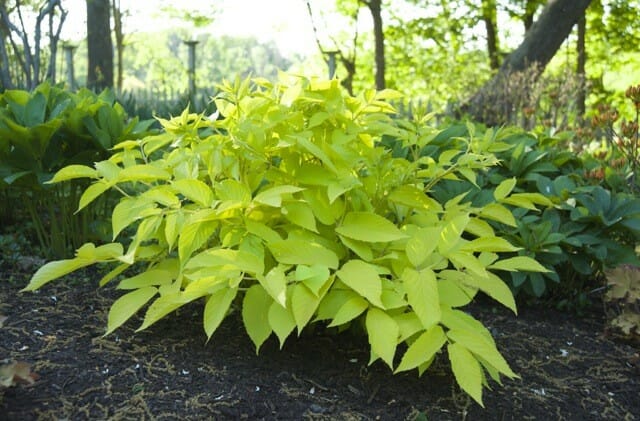 But now I have derailed: The point is that aralias are statuesque, late to flower (August into fall) and then loaded with fruit that birds, especially thrush relatives here, crave. They happily grow in partial shade, producing flowerheads that look like a cross between fireworks and constellations, though highly organized and more symmetrical than the latter. In recent years, they even come with gold foliage, or at least cordata does, in the form of ‘Sun King’ (that’s it emerging above; it gets to be at least 6 by 6 feet here). 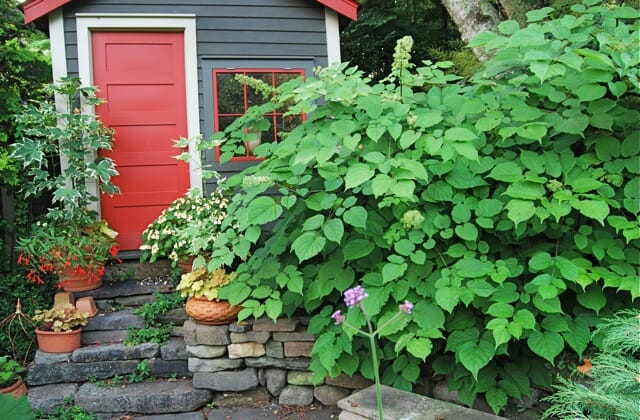 I started my journey in the genus more than 15 years ago with Aralia racemosa, above, the native American one from almost everywhere but the far West. It gets to about 6 feet in both directions, a plant I still love and perhaps the heaviest-fruited of all (fruit shown below). It can be grown from seed. When people see it in summer or fall here, they assume it’s a shrub because of its stature, but it is herbaceous, dying back to ground level each year at hard frost. 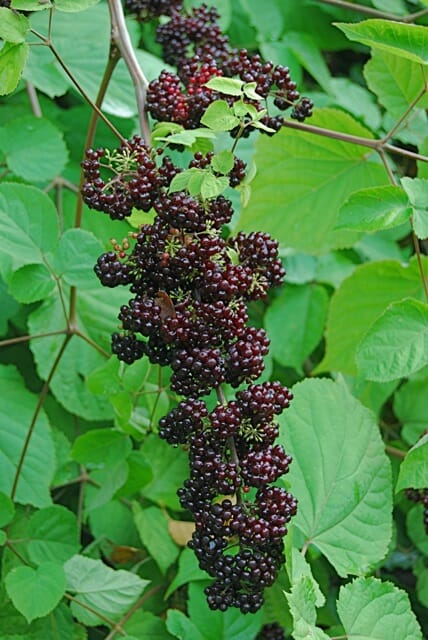 All of the spikenards, as aralias are also known, will sow themselves around (or in the case of the woody ones I grow, especially A. spinosa, sucker). If they go where you don’t want them, move seedlings when they are young. With either seedlings or runners, don’t wait until they have a tenacious foothold because then even digging “thoroughly” will leave enough behind to sprout a new plant.

A handful of ripened fruits tossed in a shady area will yield babies, in my experience; no fussy handling required of these beasts, at least not here. (That’s the native woody one, A. spinosa, in fall fruit and foliage, below. The other woody one I grow is Asian native A. elata, of which there are two very nice grafted forms with variegated leaves–including the one at the bottom of the page.) 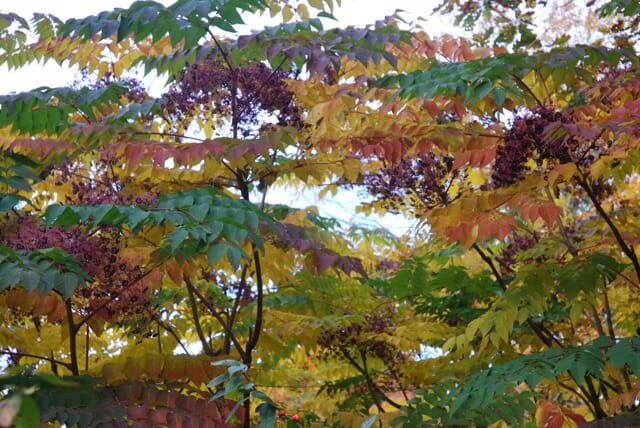 I think they’re best in a spot where it’s natural-looking already, such as at the woodland edge or even well into a woodland garden, but remember this: These are big boys, and aren’t going to leave a lot of room for precious little things. Give them plenty of elbow room, and then just enjoy. 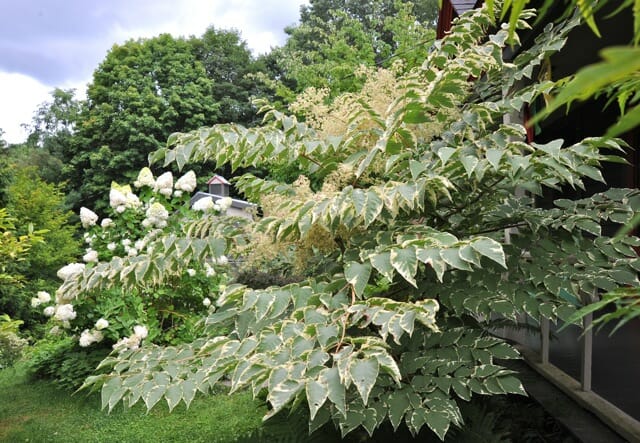 Categoriesbird sh-t shade gardening trees & shrubs
Tags
fall garden
Radio Podcasts
a way to garden podcast
Margaret's weekly public-radio show, from Robin Hood Radio in Sharon, CT, the smallest NPR station in the nation. Listen live at 8:30 AM EDT Mondays, to the replay Saturday morning, or stream the podcast anytime. LISTEN OR SUBSCRIBE FREE: Get the iTunes version; find it on the Stitcher app; or on Spotify, or your favorite podcast app. Browse past interviews below.
Podcast Archive

IAM LOOKING FOR ANY BRIGHT SPOTS ABOUT NOW, as the mid-October-looking garden surfaces in this driest September.  A couple of easy, big perennials—Lespedeza thunbergii (above),..
Read More
a
September 18, 2012
17 Comments

aralias: why i grow these big, beautiful plants

‘THANK YOU,’ SAY THE BIRDS, “these are delicious.” And they are delicious to look at, too–especially as fall comes on, with all the giant heads..
Read More
f
November 5, 2009
15 Comments

AN INCOMING FLOCK OF ROBINS LAST WEEK and another of cedar waxwings just after remind me why I grow big masses of fruit-bearing plants, particularly..
Read More