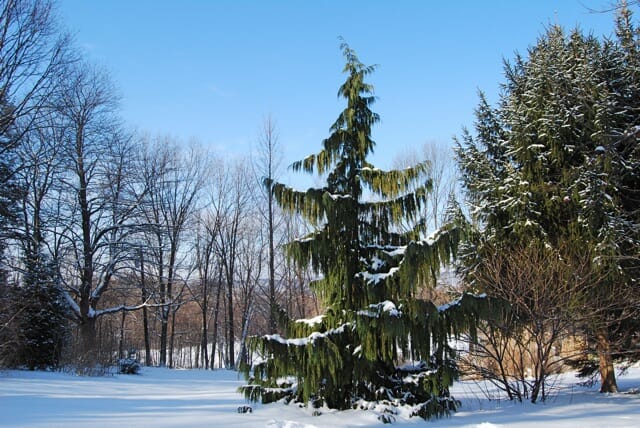 AS MANY BEGINNERS DO, I CREATED MY GARDEN BACKWARDS: planting herbaceous things first and trees and shrubs later, when their different time to maturity would have made the opposite strategy smarter. Worst of all, I forgot conifers almost entirely in those first years.

I’ve stayed put long enough to outgrow my early mishaps, and have some favorite evergreens to share including the weeping Alaska cedar, which I have always known as Chamaecyparis nootkatensis ‘Pendula’ (above, in my far borders to the west of the house). Lately it has been placed in a new genus, Xanthocyparis, but my old habits die hard.

Two weeping Alaska cedars grow here now, the first a 40th birthday present from my garden mentor; the other (above) a few years younger. Each one is about 25 feet. Though they are said to reach 60 or even 90 feet in the wild (Alaska to Oregon), half that is the expectation in cultivation. A mature tree in the garden will be about 12 feet or even a bit more across at the base, so don’t put them up against the house. Each individual is distinctively shaped–some fuller, some more wispy in demeanor.

A Zone 4-7 or 8 creature, the weeping Alaska cedar is happy here because I have the good soil moisture that it craves–well-drained, but never dry–and I can grow it in sun or part shade. It has become somewhat popular (though not commonplace) in the Northeast in recent years. In the warmer end of its hardiness, I suspect relief from mid-day summer sun and careful attention to moisture will be appreciated, but for me these have been carefree plants. 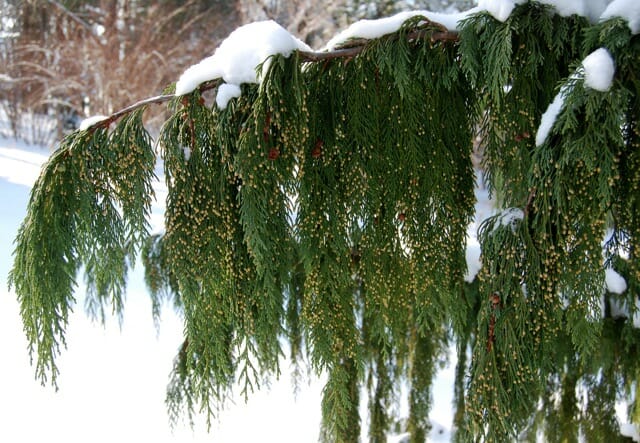 Speaking of moisture: What distinguishes Chamaecyparis nootkatensis ‘Pendula’ from other conifers is that it seems to drip.  Despite a vertical trunk, its pendulous branches are made even further fluid-seeming by the way the rich green foliage positively hangs from them (above).

There isn’t a time of year when I don’t love this conifer…well, perhaps just on my mowing days each week in summer, when its shaggy, built-in tree skirt requires special treatment to get around and up under. Not much of it to ask, really, for such persistent, year-round grace.

Growing tip: Don’t panic if inner (oldest) foliage shows some browning. Though we commonly call them “evergreens,” conifers lighten their load of old needles in late summer and fall to varying degrees depending on the species, with a show of yellowing or browning that can scare a gardener at first. Like this.

Categoriesconifers Featured trees & shrubs
Radio Podcasts
a way to garden podcast
Margaret's weekly public-radio show, from Robin Hood Radio in Sharon, CT, the smallest NPR station in the nation. Listen live at 8:30 AM EDT Mondays, to the replay Saturday morning, or stream the podcast anytime. LISTEN OR SUBSCRIBE FREE: Get the iTunes version; find it on the Stitcher app; or on Spotify, or your favorite podcast app. Browse past interviews below.
Podcast Archive

WITH THE FIRST SNOW FORECAST, and juncos and other winter birds showing up in fast-increasing numbers, my thoughts (and theirs) these colder, windy days are..
Read More
s
April 1, 2009
18 Comments

S HOPPING FOR PLANTS, ARE WE? Make a stop in the conifer section for the most obvious of year-round-interest garden additions. I wish I’d started..
Read More
b
January 15, 2011
14 Comments

THEY ARE GARDEN STALWARTS, FEARING NOTHING–not even low single digits and multiple feet of snow. In this old-fashioned Northeastern winter of 2010-11, I’m counting my..
Read More