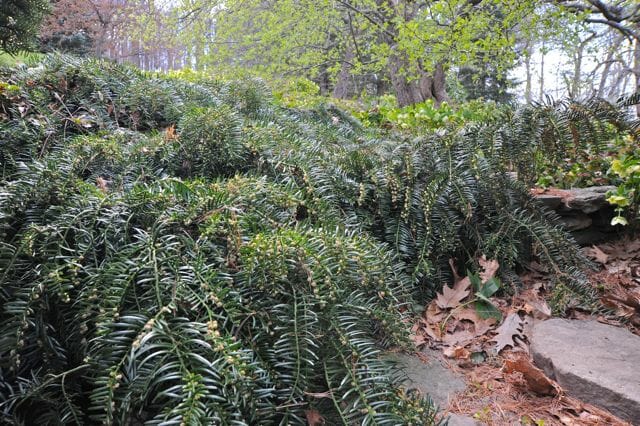 I KILLED, OR AT LEAST MAIMED, ITS UPRIGHT COUSIN. TWICE. But the prostrate-growing Japanese plum yew, Cephalotaxus harringtoniana ‘Prostrata,’ just keeps happily stretching its legs—and arms—on my back hillside. A handsome, heat-tolerant conifer that creates a sprawl of semi-glossy green groundcover in the shade…even though it’s many times wider than any book or other reference promised.

More of a good thing, I guess you could say, and also deer-resistant.

The Japanese plum yew has linear, dark green flat needles that resemble its namesake’s: the yew, or Taxus. Those are its needles and also its male reproductive structures, below; ‘Prostrata’ is all-male, and therefore makes no female seed-producing structures.

While Taxus is deer candy, though, Cephalotaxus is rated as not to their liking by experts from geographic areas as diverse as North Carolina State University, California-based Monrovia Nursery (a giant wholesaler), Rutgers University (New Jersey), and Michael Dirr in his various reference books. 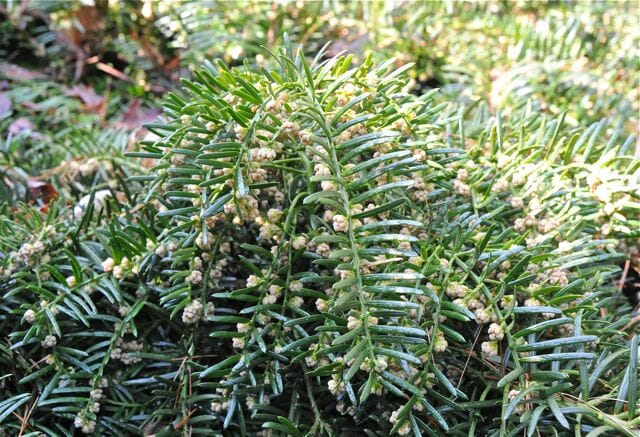 It’s also rated as hardy for Zones 6-9 in most references, but I can say that Cephalotaxus has lived more than decade in my Zone 5B garden.

The plum yew I failed with was the fastigiate form, C. harringtoniana ‘Fastigiata.’ In my usually snowy winters, its distinctly vertical branches got splayed open again and again, and the shrub never really recovered its handsome columnar stance, so I dug it out. Not dead, technically, but so badly maimed that I knew we weren’t meant for each other longterm.

With ‘Prostrata,’ though, it’s been nonstop success. At about 2 to 3 feet high, it makes a handsome underplanting for large trees, or cascading down a shady or semi-shady bank (top photo). Books say it can be more like 3 feet tall, but not here so far in a decade. (I’m in denial about one wholesale nursery catalog that says after 15 years it may decide to be a mounded shrub up to 8 feet high at the tallest point, and will try to discourage mine from any such behavior.)

The trickiest part, though: spacing. Plant labels in the nursery will claim a 3-to-4-foot spread or thereabouts; my original plant is now 12 feet across.  Two much-newer plants are already at the supposed maximum girth, and look likely to take off much farther sideways.

My best advice: Select individual specimens in the nursery whose habit seems to be lowest-growing, and give them more room than the label states. After more than 25 years gardening in one place, I can say with certainty that the number of woody things that have stayed within the bounds that reference books or plant labels told me they would adhere to is about zero.

other ‘groundcover’ conifers i rely on

Categoriesconifers Featured groundcovers trees & shrubs
Tags
great shrub
Radio Podcasts
a way to garden podcast
Margaret's weekly public-radio show, from Robin Hood Radio in Sharon, CT, the smallest NPR station in the nation. Listen live at 8:30 AM EDT Mondays, to the replay Saturday morning, or stream the podcast anytime. LISTEN OR SUBSCRIBE FREE: Get the iTunes version; find it on the Stitcher app; or on Spotify, or your favorite podcast app. Browse past interviews below.
Podcast Archive

WHAT’S YOUR FAVORITE CONIFER, the “beautiful one” to your eye? I could only narrow my list down to 10, plant-mad person that I am, but..
Read More
t
November 19, 2013
12 Comments

top trees for the home garden, with dr. kim tripp

YOU NEVER KNOW who you’ll bump into at the public-radio station in tiny Sharon, Connecticut. The latest: Dr. Kim Tripp, a botanist who directed the..
Read More
n
June 28, 2011
57 Comments

SHADE IS A TRICKSTER, CAPTURING AND RELINQUISHING territory as years pass and woody plants grow—or are damaged or lost. Twenty-five years into gardening on one..
Read More