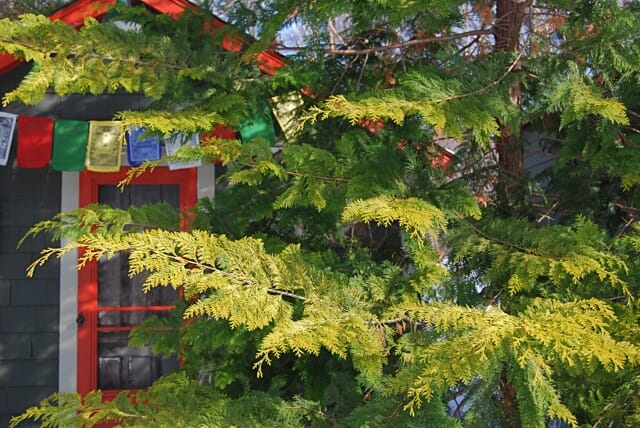 THE FINAL (?) SNOW MELTED OFF THE ‘CRIPPSII’ last week, and from underneath a frosting of silvery-white this most charming of Chamaecyparis, the golden Hinoki falsecypress, showed its gleaming golden self again. Heavenly days. Fifth in a series on beloved conifers.

For year-round gold in the garden, except when a covering of snow tries to hide it, lacy ‘Crippsii’ would be (and is) my choice. It has a graceful habit, particularly if grown in slightly more shade than sun, as my oldest plant among several here has been for a decade or so.

If you read up on the Hinokis, many references will say to grow them in full sun, but here’s my issue: Out in the full sun, I can’t give this beauty the winter-wind protection it needs here in Zone 5 to prevent browning of some foliage.

Winterburn is often not fatal, but if you have seen it on conifers or broad-leaved evergreens like rhododendron or hollies, you’d be motivated to find spots in the garden for your susceptible plants that help prevent it. Ugh. It is particularly hideous on a yellow-leaved plant.

Recommended for Zones 5-8, ‘Crippsii’ will grow to 25 feet, I have read, in 20 years, and 50 feet eventually. My largest ‘Crippsii’ is probably just shy of 20 in a decade, having started at maybe 6 feet; in the wild it gets many times larger. 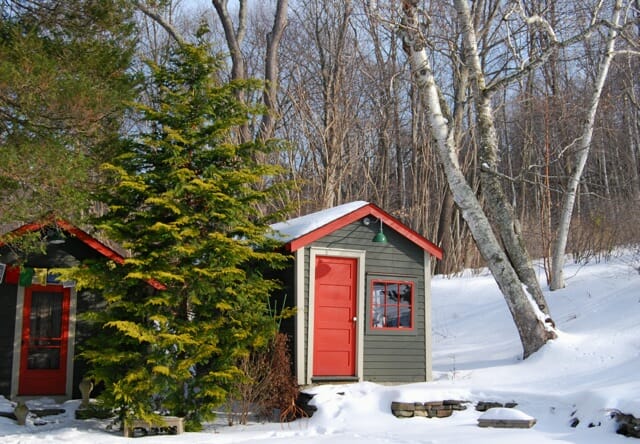 To prevent it from getting too big for the spot between the toolshed and the cat’s cabin where I have planted it (yes, Jack has a cabin; the one on the left in the photo above and behind the prayer flags up top), I’ve headed it back twice over the years. I snipped off just some ambitious tips where the spray-like flattened needles fork, telling the plant gently to redirect its growth into fullness rather than elongation. Note: Never cut back into old wood on a Chamaecyparis (I was able to find a video that might help describe why and how to prune lightly this way, better than I can here). 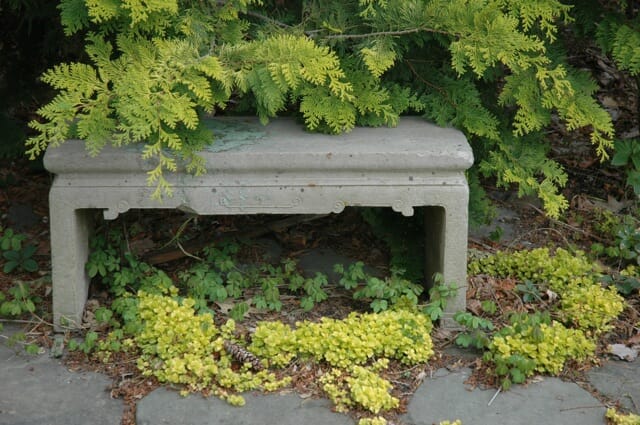 Even with the heading back, my plant is looser than ones grown out in the open; another side-effect of having chosen a semi-shaded spot for it. It is also less golden at low-light times of year, as in the top two late-winter photos, but compared to being cinnamon-colored and crispy-burned, I’ll take the yellow-green in winter. It gets bright gold quickly as the daylight strengthens now. 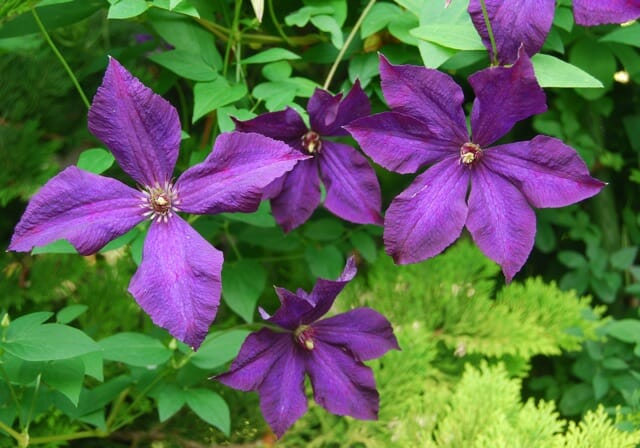 One more thing I love about my ‘Crippsii:’ The way it happily cohabitates with Clematis such as ‘Polish Spirit’ (above). Save

Categoriesconifers trees & shrubs
Radio Podcasts
a way to garden podcast
Margaret's weekly public-radio show, from Robin Hood Radio in Sharon, CT, the smallest NPR station in the nation. Listen live at 8:30 AM EDT Mondays, to the replay Saturday morning, or stream the podcast anytime. LISTEN OR SUBSCRIBE FREE: Get the iTunes version; find it on the Stitcher app; or on Spotify, or your favorite podcast app. Browse past interviews below.
Podcast Archive

WITH THE FIRST SNOW FORECAST, and juncos and other winter birds showing up in fast-increasing numbers, my thoughts (and theirs) these colder, windy days are..
Read More
s
April 1, 2009
18 Comments

S HOPPING FOR PLANTS, ARE WE? Make a stop in the conifer section for the most obvious of year-round-interest garden additions. I wish I’d started..
Read More
m
October 2, 2012
47 Comments

WHAT’S YOUR FAVORITE CONIFER, the “beautiful one” to your eye? I could only narrow my list down to 10, plant-mad person that I am, but..
Read More