I HAD A GARDEN-VISITING ‘OPEN DAY’ here of the human variety on the weekend, but every day I have visitors who fly in or hop in or slither in at will, without tickets or any other formalities. August is abuzz with visitors, including seven or eight Great Spangled Fritillary butterflies (above), who have been enjoying a patch of Verbena bonariensis every sunny afternoon the last week or so. Look who else is in evidence lately: 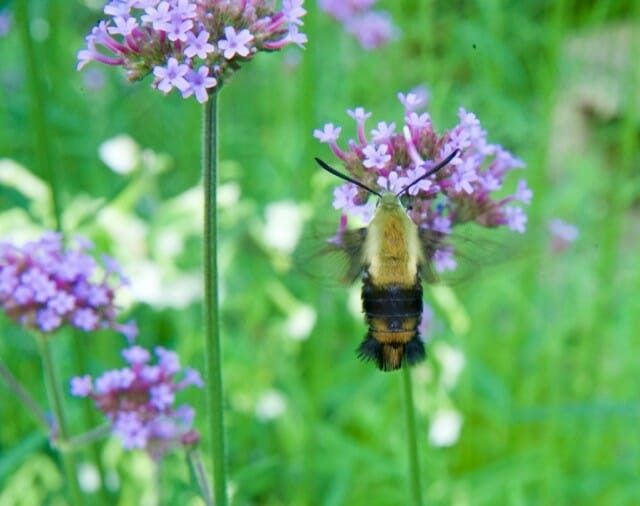 Yes, the spring-into-early-summer dawn chorus has gone silent, but oh, the sounds of the night. The birds may have stopped most of their alarm-clock duty for the season, but August is the moment of insects, of crickets and katydids with their overnight music. It’s also the time of often-colorful flights by day, by butterflies, moths, dragonflies, hummingbirds and more.

Like the snowberry clearwing moth, above, and its cousin the hummingbird-hawk moth, below. Yes, they are moths–and often referred to generically as “hummingbird moths” for good reason. 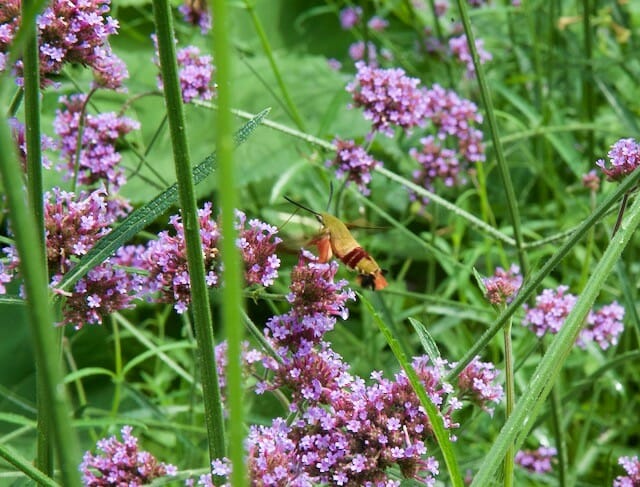 Since I began really looking at moths, and looking for moths, more closely a few years ago, it has opened a new world of great diversity. Butterflies have nothing on moths; moths are not drab or dull. 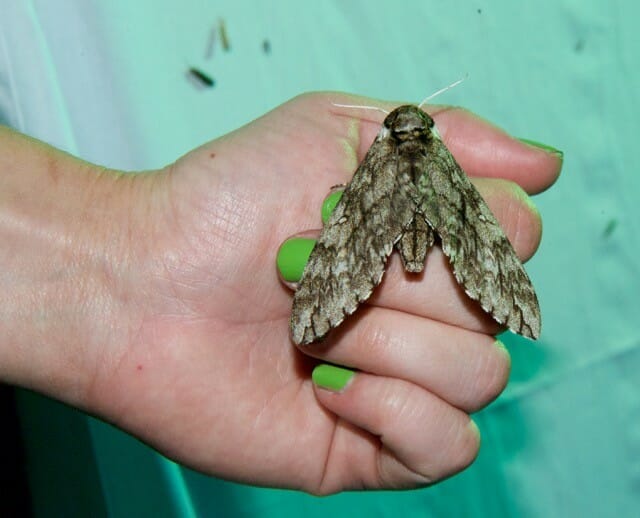 I co-hosted another Moth Night a few weeks back in the Taconic State Park that surrounds my garden. Look who showed up: above, on the green-polished hand of a visiting entomologist, and below, on the hand (and later head) of my friend and fellow bug-lover Maceo). That’s a Waved Sphinx Moth. 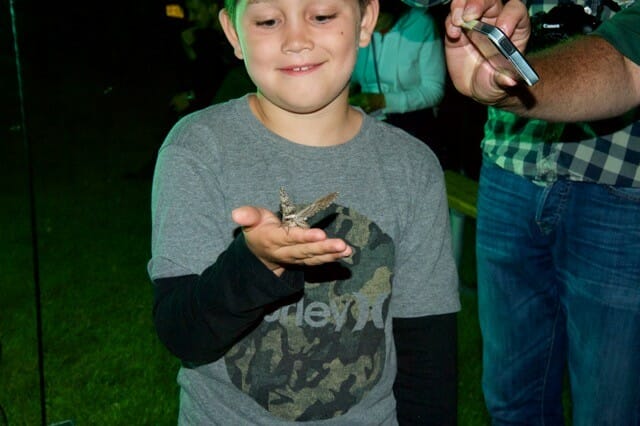 In each new visitor’s arrival there is a lesson to be learned with a bit of homework, in my field guides and online, or sometimes by pestering an expert friend. The questions I want answers to: What made them show up? What are they in search of? And why now? 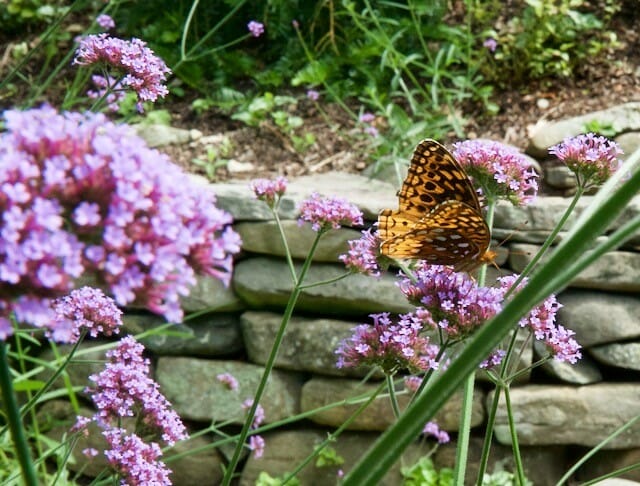 I attribute my lackadaisical approach to weeding out wild violets (meaning: I don’t) as the catalyst for the video up top. Apparently Great Spangled Fritillary butterflies in the video and the photo just above have an intimate relationship with violets. The females lay their eggs in late August and early September in my Northeast region on the violet leaves, specifically; the adults you see here on the Verbena are nectaring. More about their life cycle. 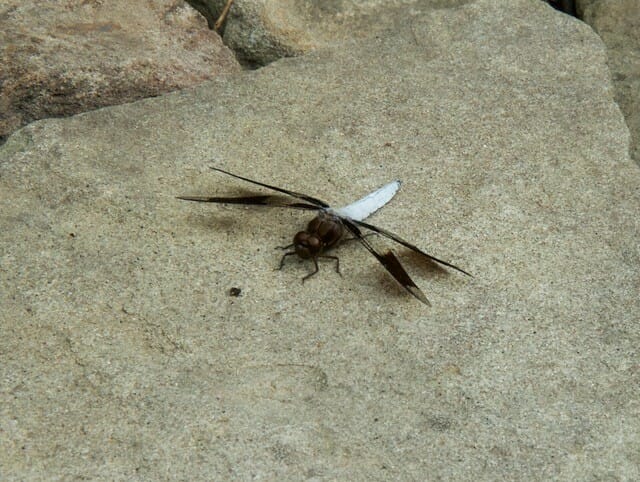 I don’t own the right camera lenses for any of this insect photography, but upgrades are on my wishlist. Even if I did have serious pro gear, it’s hard to photograph dragonflies, who move so fast. They seem to be everywhere, suddenly, when a weather event–especially a rain shower–presumably triggers good hunting in the form of swarms of smaller insects.

If only they’d slow down a bit, please, maybe I could ID them. The one above, a male of the Common Whitetail dragonfly, is one of the few I’m certain of, and who sits still long enough to accommodate me and my short lens. I can see that there are four or five other species in the garden lately because their color or size is so different from this one’s, but who knows which they are. (Odonate expert Dennis Paulson would know.) 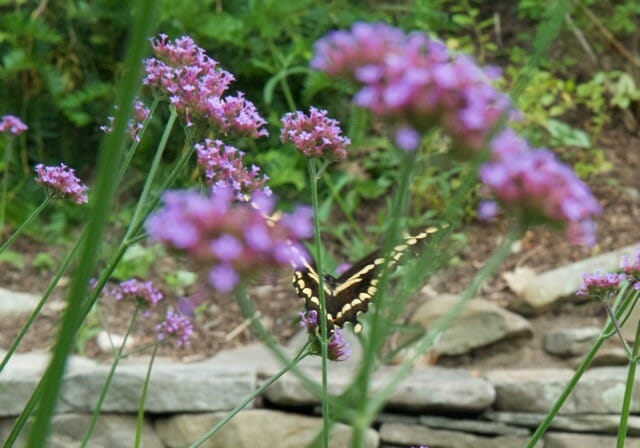 I was blessed the other day to see my first Giant Swallowtail butterfly (above), also in the Verbena. I asked my friend Andy Brand of Broken Arrow Nursery about this one, since it’s more commonly seen farther south. Andy’s a butterfly expert, too, founder of the Connecticut state butterfly society. I learned I was seeing something that is as yet not understood:

“Over the past two years Giant Swallowtails have been seen throughout CT and other parts of the Northeast, which is unusual,” Andy wrote back. “Typically they were mainly seen in the northwest corner of CT, near one of their host plants Zanthoxylum, prickly ash. Why they are more plentiful now is up for discussion. I have seen them feeding on Rue, and Dictamnus in my yard. Also, Ptelea trifoliata (wafer ash) is a host plant.” 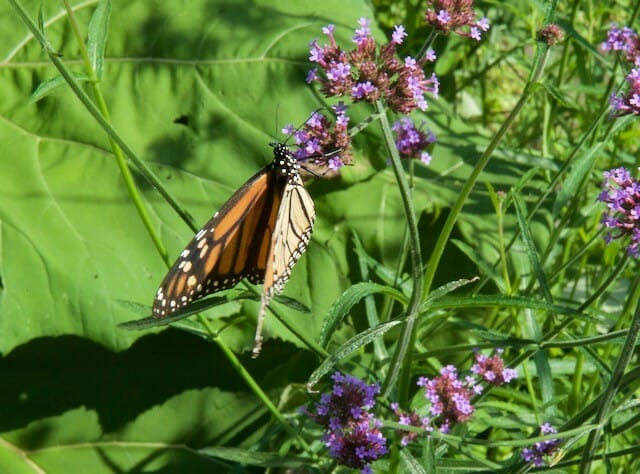 And for the first time in years in the garden proper: a Monarch butterfly showed up (above). Because their populations are so drastically diminished, it always feels hopeful to see even one. 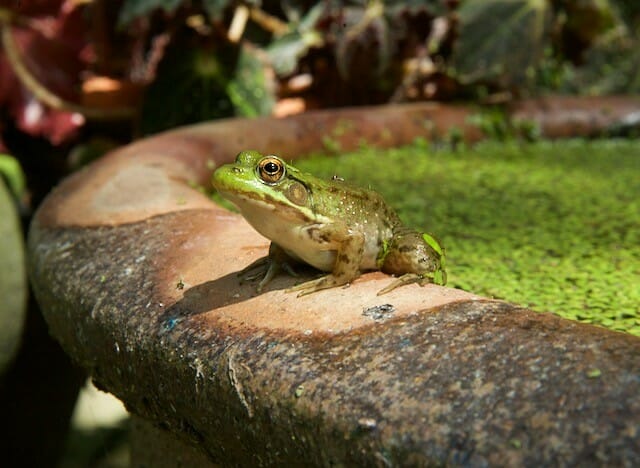 What would a discussion of visitors be without mention of those of the amphibian persuasion? The year started out very cold and then very dry, so it has been inhospitable for many of my usual, larger friends to make their way up from the brook down the road to see me. (Remember?) I’ve had a few adults in residence all season, but now the number of individuals is expanding. By August, the many tadpoles in my inground water gardens have metamorphosed; a whole new generation is out and about.

Categoriesfrogboys insects & worms
Radio Podcasts
a way to garden podcast
Margaret's weekly public-radio show, from Robin Hood Radio in Sharon, CT, the smallest NPR station in the nation. Listen live at 8:30 AM EDT Mondays, to the replay Saturday morning, or stream the podcast anytime. LISTEN OR SUBSCRIBE FREE: Get the iTunes version; find it on the Stitcher app; or on Spotify, or your favorite podcast app. Browse past interviews below.
Podcast Archive

why i'm abuzz about bugguide.net

giveaway: new ‘peterson field guide to moths’ and why to get out and go mothing

I ONLY GOT TO PAGE 5 of the new “Peterson Field Guide to Moths of Northeastern North America” before I was hooked.  “Moths are everywhere,”..
Read More
w
April 29, 2018
162 Comments

why moths matter (and how to get to know them), with seabrooke leckie

IT WAS ALMOST SIX YEARS ago to the day that I had my moth epiphany thanks to Seabrooke Leckie, who in 2012 co-authored the “Peterson..
Read More