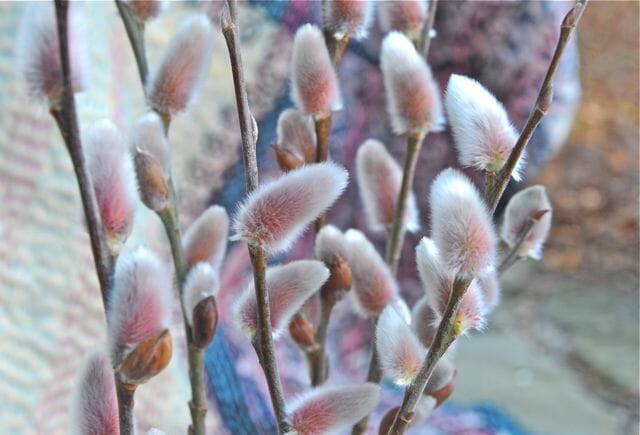 IMARCHED UP THE HILL and stuck my face in a stand of twig willows and dogwoods the other day, starved for some color in this relentlessly mud-toned non-winter. The world looked really bright and shiny through their gold and red twigs, and then I remembered the giant pussy willows (Salix chaenomeloides, cut and stuck in a vase, above) down by the road and went to pay them a visit as well. Time to sound another cry in favor of these easiest of plants–and offer a new source of an incredible variety of willows, in particular.

The noted plantsman Michael Dodge (remember the yellow-fruited viburnum named for him?) is kicking off his second season of Vermont Willow Nursery, selling easy-to-root cuttings of Salix. There are 80-something species and varieties in his current availability list, with a footnote that there are more than 200 in his collection (though some in short supply)—in case the 80 didn’t satisfy. He keeps telling me this is his little retirement project, but it looks suspiciously more full-blown that that. Can a gardener every really control him or herself? (Besides via the website, you can reach him by email at vtwillownursery [at] me [dot] com.) 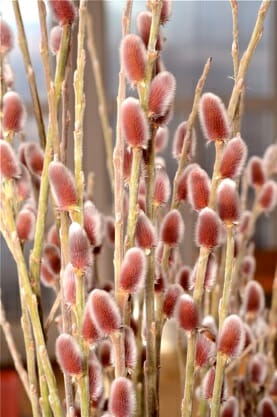 Dodge sells 8-to-10-inch dormant unrooted cuttings in bundles of five for $12.50 a bundle, shipped March into May (and again in fall for warmer zones). He also ships bundles of 6-foot cut rods for making “fedges” (fences crossed with hedges—get it?) and willow structures, and sells cut stems to florists. He reports that with Valentine’s Day approaching, the pink types of pussy willows are selling very well, like S. chaenomeloides ‘Mt. Aso’ (inset photo from the Vermont Willow Nursery website, left).

“There is nothing easier to propagate than most willows,” says Dodge. “This is because they contain a natural rooting hormone–in fact the first rooting hormones were developed from willows.”

So what’s his step-by-step–which those of us with willows can also use to make more to plant or share?

“I usually take cuttings about 10 inches long,” he says, “and a minimum of one-quarter inch thick (unless it is a slender variety), but they can be thicker than that–almost any thickness. I have rooted 14-foot-long cuttings in living willow structures!”

Stick your cuttings in the soil late winter, as soon as frost leaves the ground, to get the best results. Fall cuttings, taken as soon as the leaves drop, are about as successful, according to Dodge, who at his nursery covers the ground of the propagation bed with 6 mil black polyethylene to preserve moisture and block weeds. In a garden situation, cuttings can be stuck through any weed blocker with mulch over it, he says; Dodge uses a tire iron or a piece of half-inch rebar to poke the planting holes, making sure the thick plastic isn’t too tight against the stems, which could cause eventual girdling.

Plant the cuttings deep, he advises, so that just 1 to 2 inches remain above soil and plastic level. Watering may be needed if your soil tends to dry, but you don’t want to swamp the plants; the heavy plastic will usually do the moisture-mediating trick, and in his clay loam he says he doesn’t need to water them.

In the first year growth can reach an energetic 3 to 8 feet, depending on the variety, says Dodge (who notes that the Alpine types are harder to root than most others). A chart of which willows are best used for what usage is here (think living structures versus woven fencing and more) or just start at the Vermont Willow Nursery homepage.

(And P.S.–that’s Salix alba ‘Chermesina,’ the coral-bark willow, in the photo below with the red dogwood twigs of Cornus sericea ‘Cardinal’ from up on my hillside. My portrait of the giant pussy willow, Salix chaenomeloides, is here. My favorite Salix of all isn’t grow for its twigs or catkins but for its silvery-bue foliage. It’s the rosemary willow, Salix elaeagnos.) 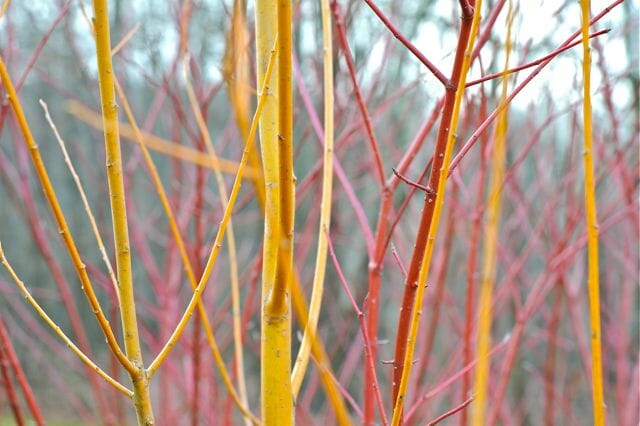 Categoriesdeciduous ornamental plants trees & shrubs
Radio Podcasts
a way to garden podcast
Margaret's weekly public-radio show, from Robin Hood Radio in Sharon, CT, the smallest NPR station in the nation. Listen live at 8:30 AM EDT Mondays, to the replay Saturday morning, or stream the podcast anytime. LISTEN OR SUBSCRIBE FREE: Get the iTunes version; find it on the Stitcher app; or on Spotify, or your favorite podcast app. Browse past interviews below.
Podcast Archive

‘IT’S ENDLESS,” plantsman Michael Dodge (former owner of Vermont Willow Nursery) was saying over the phone a few years back. He was alluding to the..
Read More
g
January 25, 2010
17 Comments

THE BIRDS HAVE STRIPPED MOST EVERY JEWEL from the garden. I’m down to the crabapples on ‘Ralph Shay’ and ‘Bob White,’ which they seem to..
Read More
m
February 1, 2014
15 Comments

POOR IMPULSE CONTROL can be a real liability for the gardener in February, so shall we try together to stifle our urges to start seeds..
Read More