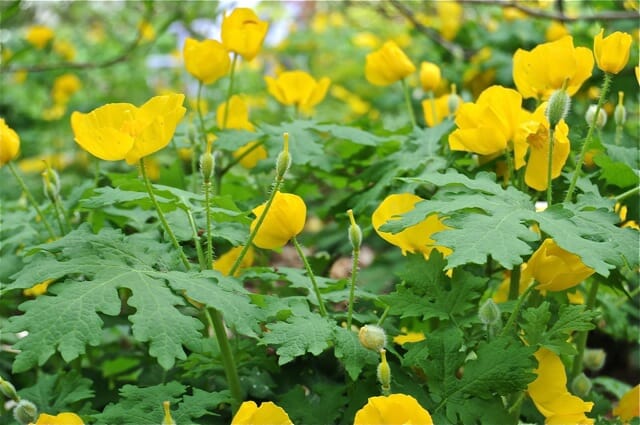 I BROUGHT THEM HOME (WITH PERMISSION!) from Wave Hill, the public garden in the Bronx, a couple of decades ago: a few delightfully fuzzy, fat seedpods of celandine poppy from plants that brightened the perimeter of their famed Wild Garden. Stylophorum diphyllum has been a bright, shiny companion ever since in my shady and semi-shady borders, a native American wildflower that animals don’t eat; pests don’t chew, and that doesn’t get diseases.

Stylophorum is a poppy relative, a member of the family Papaveraceae (as the distinctive orange-gold-colored sap will tell you if you break a stem or leaf). This Zone 4-9 self-sowing perennial is native to moist woodlands and stream banks of Eastern and Central North America, growing to a foot to 18 inches tall (the flowers soar above the basal rosette of leaves). Unlike some plants that seed themselves around, this one’s easy to pull out—no nasty rhizomes that stay behind. 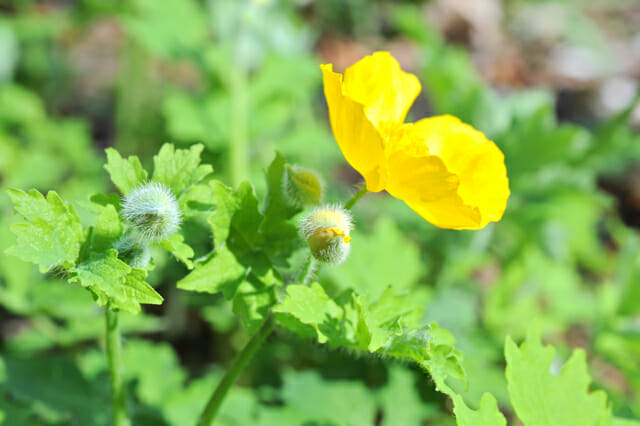 The big gold flowers appear mostly in April-May but then repeat all season (unless the plant’s in too dry and hot a spot, when it may even go dormant). Even the foliage is nice: a fresh-looking blue-green and so textural with its beautifully lobed shape, plus undersides that flash with white.

And then there are those seedpods that got me started in the first place with this plant. (The ones in the photo below are just starting to ripen and will fatten up.) Irresistible. 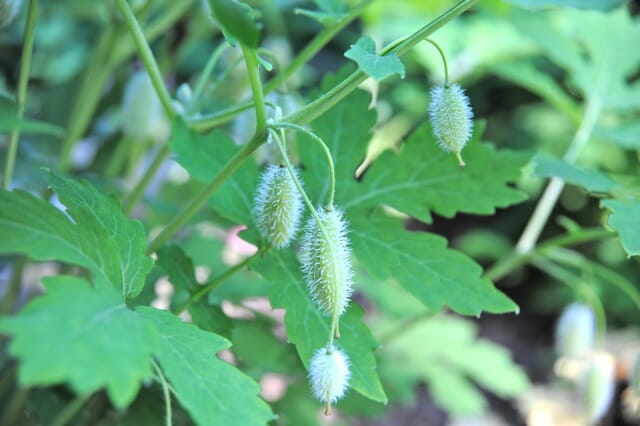 Of Stylophorum’s native range in the central and Eastern U.S., the Lady Bird Johnson Wildflower center says this:

‘OCCURS IN NATURE from western Pennsylvania north to Wisconsin and Michigan, south to Arkansas, Tennessee, and southwestern Virginia, with isolated populations in northern Alabama and southern Ontario. Because its range is so limited in that province, it is listed as a Species Endangered by Canada’s SARA (Species at Risk Act) and by COSEWIC (Committee on the Status of Endangered Wildlife in Canada).’

Their website also notes that chipmunks will eat the seeds–but what DON’T those little devils eat, I ask?

I was interested to read on an Illinois wildflower site that the celandine poppy is found, “in high quality woodlands; it is one of the woodland wildflowers that is threatened by the invasion of Alliaria petiolata (Garlic Mustard),”  a weed with which I am all too familiar. Though the poppy was never native here, the Alliaria it has taken over lots of shady places that probably used to have other residents).

Speaking of weeds: Celandine poppy to some people’s eye looks a lot like an Asian invader called greater celandine (Chelidonium majus), which is also a member of the poppy family, with smaller, less-showy yellow flowers. Greater celandine is an introduced Eurasian weed commonly seen along roadsides. Learn about telling them apart. 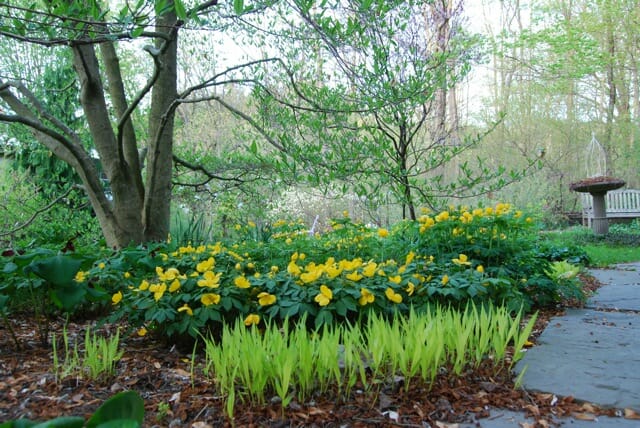 Stylophorum overlaps in bloom time with my favorite little choice Asian ephemeral, Hylomecon japonicum (which turns out to be its botanical cousin, and both have gold flowers). Merrybells, or Uvularia grandiflora, and a nearby shrub of Kerria japonica ‘Picta’ add to the gleaming story, as do several clumps of the gold-leaf bleeding heart, Dicentra ‘Gold Heart,’ and the emerging yellow grass called Hakonechloa ‘All Gold’ (above) that are both particularly nice with all these bright flowers.

Remember, spring is all about the gold, isn’t it?

I HAVEN’T GLIMPSED EVEN A LEAF of Virginia bluebells in months here, but it’s on my mind at the moment, anyhow. Why? Because I’d like..
Read More
e
May 18, 2014
45 Comments

WHAT SPRING WILDFLOWERS can you multiply easily yourself (like now!)? How long will a young trillium take to flower–and can you really count the little..
Read More
6
May 3, 2013

MY GARDEN, LIKE MOST (and like the assortment at the garden center), is a jumble of non-native and native plants. But at the moment of..
Read More