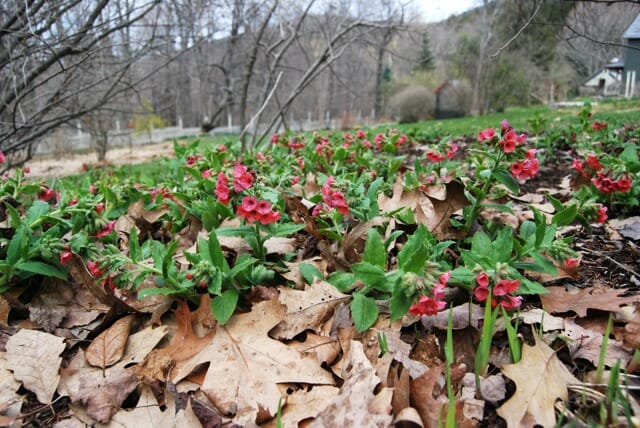 SPRING, ALL PRETTY IN PASTELS, DOESN’T HAVE ENOUGH RED FOR ME, I suppose, which is why I like the red trillium or wakerobin, red tulips for cutting, and especially Pulmonaria rubra, the red-flowered lungwort. No fancy-pants, silver-splashed foliage like its more popular cousins, perhaps, but P. rubra is an ace of a plant, early and tough and ever-so-tolerant.

Just after or even as the hellebores begin, and overlapping them, P. rubra (Zones 5-8) is the next perennial to open in the garden here each year. It’s even early among the pulmonarias, actually (which more often have blue flowers, or pinky-purple). The snow has barely melted, and there it is: starting to bloom.

We’ve had many years together, and owing to the generous divisions it’s always happy to offer (and the self-sowns, too), P. rubra has become one of my standbys for massing in loose sheets in the shade under deciduous shrubs, where I want cover and a little early fun, but not a lot of extra work. It spreads happily but not aggressively, and is very easy to dig out.

The maintenance regimen includes only one hard cutback a year, after flowering. Lungwort will sulk and perhaps go temporarily dormant if the area gets terribly dry, and doesn’t want to be sodden, either, which will quickly rot off the plants.

P. rubra combines well with various bulbs; I have clumps of white Narcissus interplanted in one mass of it, and everyone seems perfectly happy together. 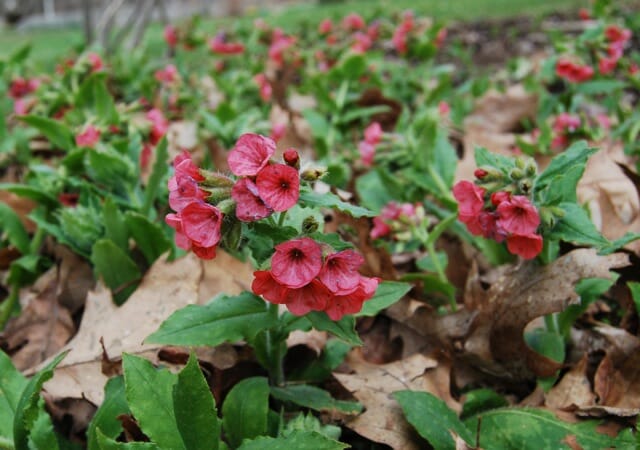 There are named cultivars of P. rubra, such as ‘Redstart,’ and even one with variegated, white-margined leaves called ‘David Ward.’ But to me that last one’s overkill; the flowers are the point with this gem, that extra-optimistic flash of red that admittedly burns out after a good long show to pinkish-red, the sign of warmer days to come.

My only question about P. rubra: Why isn’t it more widely available? Fortunately, some years Joy Creek Nursery in Oregon offers it  (labeled as ‘Redstart’) in their catalog. If I didn’t already have it, I know what I would do…order some.

Categoriesannuals & perennials groundcovers shade gardening
Tags
groundcovershade gardenshade perennials
Radio Podcasts
a way to garden podcast
Margaret's weekly public-radio show, from Robin Hood Radio in Sharon, CT, the smallest NPR station in the nation. Listen live at 8:30 AM EDT Mondays, to the replay Saturday morning, or stream the podcast anytime. LISTEN OR SUBSCRIBE FREE: Get the iTunes version; find it on the Stitcher app; or on Spotify, or your favorite podcast app. Browse past interviews below.
Podcast Archive

SHADE IS A TRICKSTER, CAPTURING AND RELINQUISHING territory as years pass and woody plants grow—or are damaged or lost. Twenty-five years into gardening on one..
Read More
u
April 14, 2010
8 Comments

THEY’RE OFF! OR SO IT SEEMS. IT’S A HORSE-RACE-TURNED-ROCKET-LAUNCH this time of year, with the spring vetchling (above), Lathyrus vernus, going neck-and-neck with my treasured..
Read More
s
January 27, 2011
46 Comments

slideshow: 10 great groundcovers to rely upon

IAM THINKING OF SIMPLIFYING SOME OF MY BIGGEST GARDEN BEDS this year—spots where the shrubs have grown in and are just crying out for a..
Read More