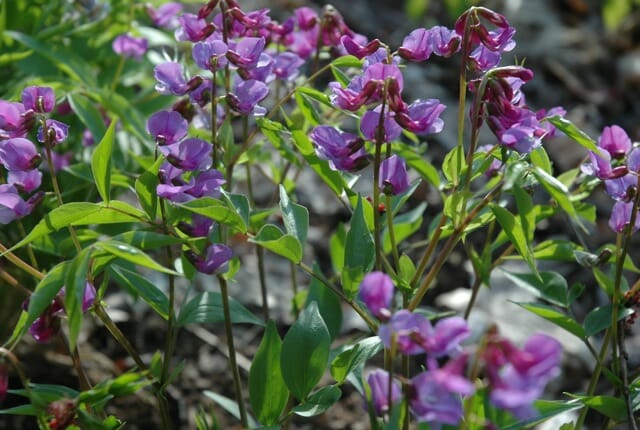 MORE ARMCHAIR CATALOG SHOPPING, once removed: If I didn’t already have the little perennial pea called Lathyrus vernus, or spring vetchling, I’d order plenty. Here’s why you should:

Lathyrus vernus plays well with others, and doesn’t ask for any attention. It even tolerates rather dry spots in the woodland garden, hallelujah, though I grow it in sunnier areas, too. Sold?

In my garden, Lathyrus vernus coincides with the mid-season to late Narcissus, and is in full color with the acid-yellow early euphorbias, hellebores and pulmonarias, among other things.

A girl (or boy) can’t have enough of this non-vining perennial, a herbaceous mound of a thing that’s maybe a foot high and wide once fully grown, with a stature like a tiny, ferny shrub. It will take a couple of years to reach full size, but is nice, even if less impactful, when young. You will get seedlings, but not in profusion, at last not here in the Northeast. 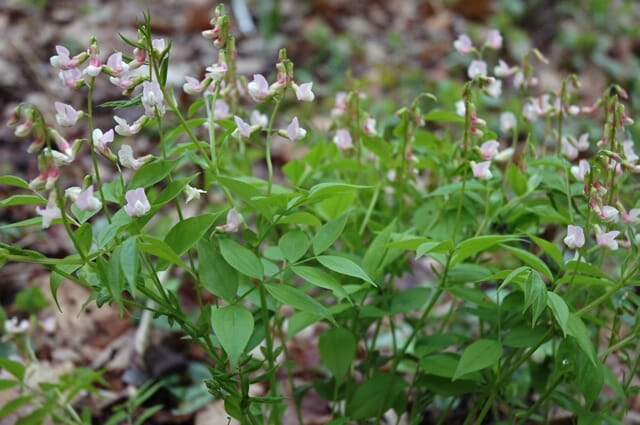 The pea-like flowers of this little legume are most commonly a rich purple, and less commonly pink (above) or pink and white (L.v. ‘Alboroseus’). A close cousin called L. aureus, with apricot blossoms, is on my must-have list, but hard to find. All are hardy as cold as Zone 4, I have read.

If it’s such a nice plant, why isn’t it more widely sold? Like so many early spring beauties, L. vernus doesn’t look like much in a nursery pot, particularly when out of bloom. I was lucky that much smarter gardening friends from Seattle who curate the Dunn Garden there brought me a flat of plug-sized seedlings years ago.

“What are those?” I said, wrinkling my nose at the nondescript sprouts in the black plastic tray.

“You’ll see,” they said, and set about plugging them in here and there as these particular friends are inclined to do in other friends’ gardens, taking the concept of hostess gift to a whole new level.

Come to think of it, time to invite them back for another visit, isn’t it?

Categoriesannuals & perennials shade gardening
Radio Podcasts
a way to garden podcast
Margaret's weekly public-radio show, from Robin Hood Radio in Sharon, CT, the smallest NPR station in the nation. Listen live at 8:30 AM EDT Mondays, to the replay Saturday morning, or stream the podcast anytime. LISTEN OR SUBSCRIBE FREE: Get the iTunes version; find it on the Stitcher app; or on Spotify, or your favorite podcast app. Browse past interviews below.
Podcast Archive

I SPENT PART OF THE HOLIDAY WEEKEND ADMIRING the bush clover, Lespedeza thunbergii (the purple cloud in my previous post), and another chunk of time..
Read More
u
April 14, 2010
8 Comments

THEY’RE OFF! OR SO IT SEEMS. IT’S A HORSE-RACE-TURNED-ROCKET-LAUNCH this time of year, with the spring vetchling (above), Lathyrus vernus, going neck-and-neck with my treasured..
Read More
d
March 9, 2011
19 Comments

IFEEL ENTITLED TO ANOTHER ROUND OF MAKE-BELIEVE, since the tenacious winter dared to deliver yet another ice storm this week, just when I had spied..
Read More