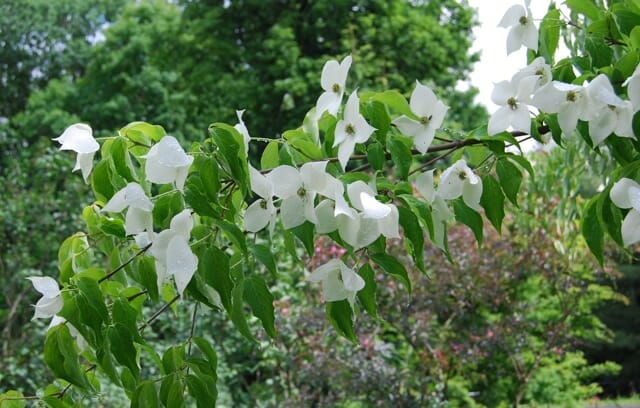 I T’S NOT THE BEST KOUSA DOGWOOD YEAR EVER here, with only half-hearted blooms in most cases and some of the gang having taken a decided hit in the up-and-down weather. But it’s Cornus kousa (or Korean dogwood) season nonetheless, so time to visit the gang and celebrate them. 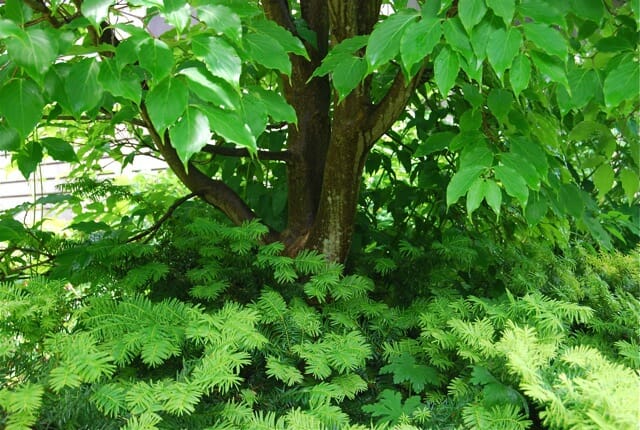 I have an unnamed Kousa seedling near the front path (top and above), a favorite of the chipmunks when it’s in fruit because they live in a wall right beneath the tree (their post-feast debris, below). Its “feet” are hidden by two low-growing prostrate golden yews (above), which will show off the peeling Kousa bark nicely year-round as the trunk shapes up with age. 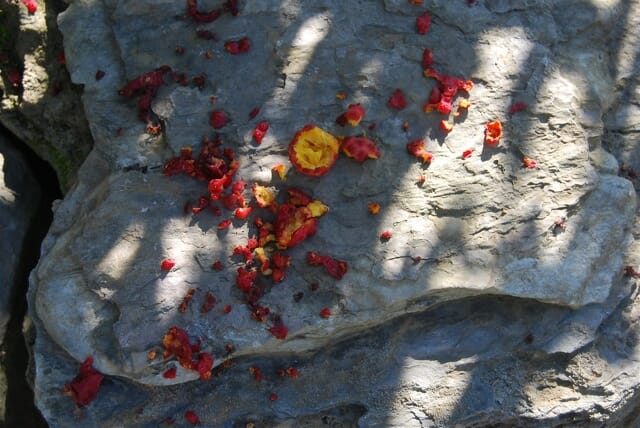 My favorite Kousa, the variegated shrublike one called ‘Wolf Eyes,’ looks anything but happy right now, perhaps a combination of an extra-dry May with repeat late frosts tossed in for good measure. That’s it below, in the distance. 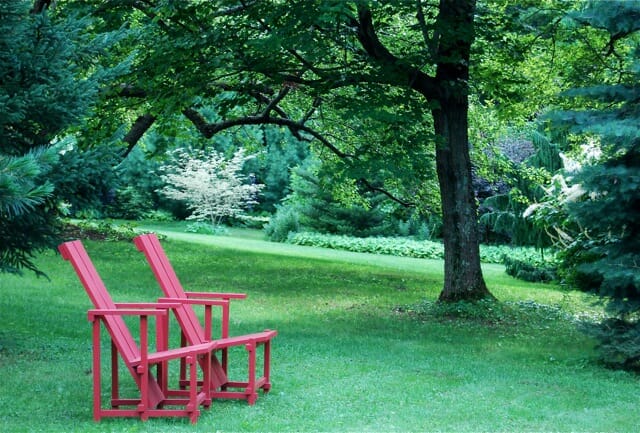 Mea culpa for not watering it properly, I guess; it looked good early on and then, poof, toast.  No brittle twigs, thankfully; just lots of crisp leaf edges. I’m watching for signs of what it wants to do next before I do anything but keep it well-hydrated (no food, no pruning, not yet). 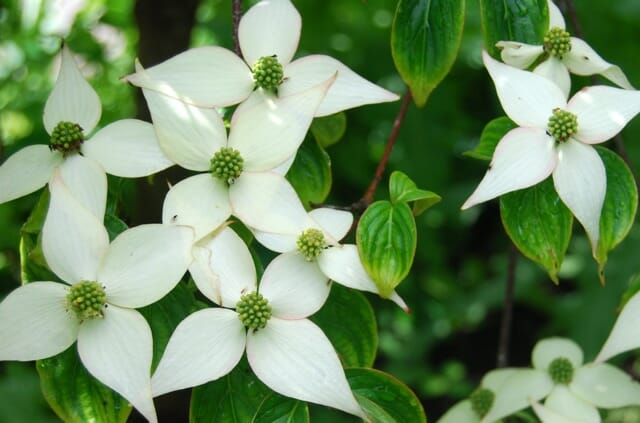 And then there’s the smallest: a weeping Kousa, the one called ‘Lustgarten Weeping’ that I almost tossed, as those of you who were here last year will recall. Despite the fact that my un-beloved yellow bellied sapsucker male apparently moved from the nearby lacebark pine that was his passion last year to the weeping Kousa sometime in the last few months, it’s flowering mightily (the appropriately smaller flowers, above), trying to carry on as if nobody turned its bark to a stencil pattern. Yikes, and just when I had finally gotten to like the plant (of course).

Admittedly, I have a wandering eye. I’ve been noticing a few pink-flowered Kousas nearby the last week in my travels and feeling almost tempted…maybe there will be another adoption soon, but I have some reading to do first on which varieties are best, or whether an intermediate hybrid between C. kousa and C. florida would be better. Which Kousa dogwoods do you grow, and how are they faring this year as spring turns to summer?

slideshow: dogwoods, or cornus, i rely on

ABIG, OLD CORNUS FLORIDA, or flowering native dogwood, shaded the patio of the house I grew up in, a handsome tree in multiple seasons and..
Read More
t
November 17, 2008
26 Comments

IN JUNE I CONFESSED TO AMBIVALENCE about my weeping Cornus kousa, which grows beside where a much larger tree was lost to disease last fall...
Read More
t
June 9, 2011
12 Comments

IT REMINDS ME OF THAT SIMON AND GARFUNKEL SONG, “At the Zoo.” In early June, it’s all happening at the zoo I call a garden,..
Read More