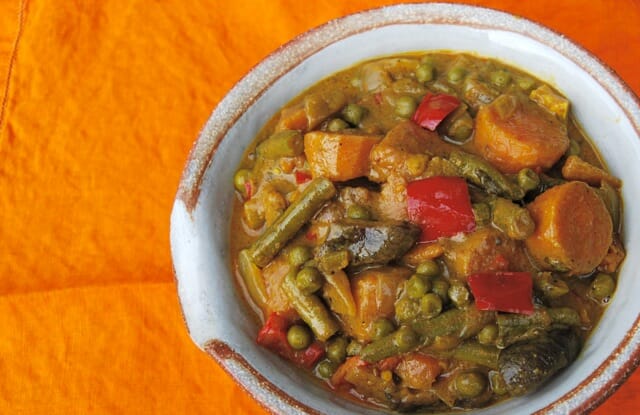 IKNEW THEY WERE ONE OF BABY’S FIRST FOODS, and one of nature’s most nutritious of all. But as a relatively novice sweet-potato grower, there were nine things–well, maybe 10 if you include that they taste great in a bowl of quick curry, above–that I had to learn for myself.

1. That all the mail-order providers I have used send me my “slips” (pieces of vine sprouted off their stock sweet potatoes) much too early. Yes, I may have few hard frosts after late April or early May…but the weather is by no means as settled nor the soil as warm as a sweet potato would ideally have it. I want my slips to arrive a month later than some stupid automated calculation at the growers is apparently indicating, triggering my too-soon shipment. Just say no to early delivery; hurrying doesn’t help.

2. If I had healthy, firm stock left from the previous year—and no sign of any disease or troubles last growing season—I could technically sprout my own slips, and it may just come to that. I’d need to get some of the stored potatoes to begin to sprout in the dark, which they eventually do as you may know if you have forgotten one in the pantry. I’d plant them in the equivalent of a hotbed (whether under lights on a heat mat, or in an actual hotbed out in a coldframe outdoors). This National Gardening Association article on slip-growing is on my beside for careful study.

Storage Is No Picnic

3. On the other end of the timeline, storage is a crapshoot in the average home. After a week of curing the just-dug crop at 85 degrees and 85-90 percent humidity or thereabouts (where exactly is that perfect spot, I ask?) they want to be tucked in at 55 to 60 degrees with 85ish percent humidity.  The house in winter is hot and very dry; the basement is too cold, and so on. Tricky business.

Freezer to the Rescue

4.Cooking and freezing some of the crop at peak condition, before storage, may be a good solution to storage limitations. I prepare then freeze mashed or roasted sweet potatoes; a pureed soup with a sweet-potato base; and even this curry-in-a-hurry, top photo (but leave out the mushrooms until reheating time). Many delicious and inventive sweet potato recipes from my food-blogger friends are in the box down the page a bit farther. Do go sample.

5. Again on the perils of storage: I’ve learned that behaving as if these were white potatoes that can be left in the ground just a little longer as fall comes on, may sharply reduce storage life and even the flavor. Don’t wait until frost hits the vines to take your cue; mark down when you planted, and what the presumed days to maturity are for the variety (usually about 120; at least 100) and check a sample plant for readiness then. Triage: If frost beats you, cut the vines at ground level right away (to limit damage underground) and harvest promptly.

6. Watering these guys is tricky. Overwatering is no good, and a wet year can result in poor root formation, and long, stringy sweet potatoes. They like it hot and dry once their vines have filled in and covered the ground. Particularly dicey: a serious wet spell in the month before harvest, and big rains after dry spells late in the growing, which can cause splitting and cracking (as with various other crops). Next year I must try to better approximate what they apparently want: less frequent deep waterings, allowing the soil to dry down 6 inches or more before watering again.

7. Letting these lusty vines spread out and root in along the way as they please might look like a certain bumper crop’s in store—but it doesn’t work that way here. I suppose if you had more frost-free months than I do that would be OK to let them stray a bit, but I need to “tell” the plants to concentrate their efforts and make good-sized potatoes—not run and run and run, setting down and starting to make more young plants and small potatoes far from the parent plant. To that end…

8. …Black plastic does more to help a Northern grower like myself heat up the soil to the warmth that sweet potatoes like. It can also keep the vines from rooting in everywhere (as can cultivating between rows). Lay it down as early as possible for maximum early warming.

9. Technically you can eat your ornamental sweet potato vine’s “potatoes,” but don’t. This last fact I learned because readers who wrote in to ask me about it, and I did some homework: Yes, the Ipomoea batatas we grow for show—like ‘Blackie’ with purple leaves or ‘Margarita’ with golden ones, and all their cousins—is the same genus and species as ‘Beauregard’ or ‘Jewel.’ But remember this: It was probably treated in the nursery where it was propagated with one or more of a number of chemicals that are not intended for vegetable-growing use. (Apparently they also don’t taste anywhere as good as the vegetable-garden varieties, even without the nasty dose of chemicals.)

FALL FEST IS A cross-blog recipe and tip swap–and you’re invited to participate. Simply post your link or recipe or idea in the comments below my post, and also on the blogs of the other participants listed in the recipe links box just above.

Want more information on how it all works? Get the details, including our shift into Fall Fest after many weeks of Summer Fest, with a new logo but the same recipe-sharing routine). We’re continuing right into the Thanksgiving holiday.

Categoriesrecipes & cooking vegetables
Radio Podcasts
a way to garden podcast
Margaret's weekly public-radio show, from Robin Hood Radio in Sharon, CT, the smallest NPR station in the nation. Listen live at 8:30 AM EDT Mondays, to the replay Saturday morning, or stream the podcast anytime. LISTEN OR SUBSCRIBE FREE: Get the iTunes version; find it on the Stitcher app; or on Spotify, or your favorite podcast app. Browse past interviews below.
Podcast Archive

let there be sweet potatoes: how to plant them

B ETWEEN A ROW OF CUTTING TULIPS AND ANOTHER OF ALLIUMS, on a mounded “ridge” of soil created for the purpose, the sweet potatoes were..
Read More
i
November 22, 2012
19 Comments

i’m thankful for you (and for sweet potatoes)

DEAR A WAY TO GARDEN FRIENDS: This Thanksgiving, I wanted to be sure to express my gratitude to all of you for sharing your garden..
Read More
t
January 14, 2009
45 Comments

the confession: what seeds i ordered

I PROMISED RESTRAINT, right here and out loud, and if all things are relative, I demonstrated at least a measure of that virtue. On the..
Read More