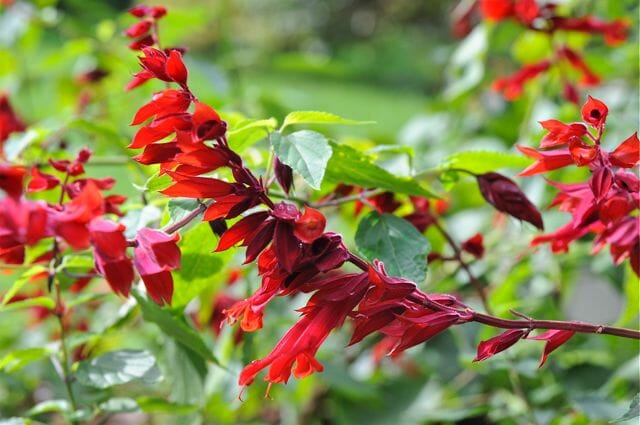 THE LAST OF THE FEMALE HUMMINGBIRDS have just departed for points south, following the males who left well ahead of time as if to set up camp. But onward bloom three of my favorite hummingbird plants, three red-flowered salvias I always include in the garden somewhere, year to year. Meet Salvia van houttii, Salvia coccinea ‘Lady in Red’ and the gold-leaf pineapple sage, Salvia elegans ‘Aurea,’ sometimes marketed as ‘Golden Delicious.’ 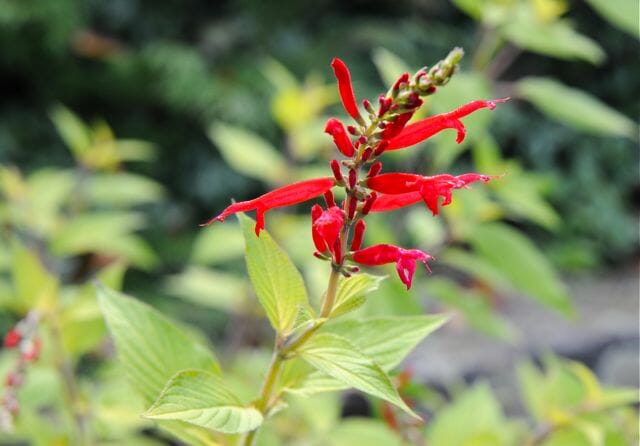 Pineapple sage is the biggest plant, and latest of all to start to bloom here, but the last female ruby-throateds got a few sips in this year, at least.  The plain green form, which like the golden-leaf one smells like pineapple when the foliage is touched, gets to more than 3 feet tall for me—taller in climates more favorable to this Zone 8-hardy beauty (a commenter says hers, in Humboldt County, California, is 7 feet tall). The gold one (above in detail) is beautiful in a very big pot. 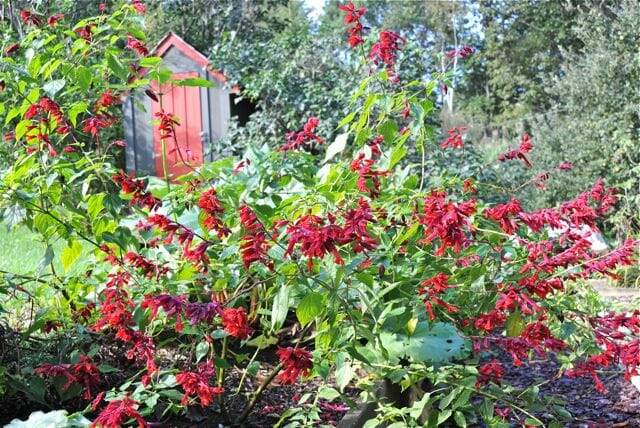 Salvia van houttii is big, too. But it’s a little more sideways than stiffly upright, all lax and loose in a sort of crazy, unpredictable way that I like, or at least when grown as an annual in cold zones like mine. (It would be hardy in about Zone 9-11, and become a 4-foot high and wide shrub.) The garden photo above is actually a grouping of three plants. Its flowers are lush and bigger than many of the other sages’, more on a par with those of the all-too-familiar Salvia splendens, and in fact Salvia splendens ‘Van Houttii’ is another name this one goes under. Apparently van houtii was a version of Salvia splendens before breeders “improved” splendens into a stiffer, more upright thing. I’ll take the unimproved one, thank you.

There is a gold-leaf form of Salvia van houttii, too—but it’s variegated, and even with my ultra-high color tolerance (remember, the trim on my dark green house is painted orange!) I couldn’t stomach ‘Dancing Flame,’ with its hot red blooms. The van houtti that I favor has plain green foliage, and flowers whose buds are tucked into wine colored calyxes, then open up a deep red (glowing especially red on a sunny day, as in the top photo). 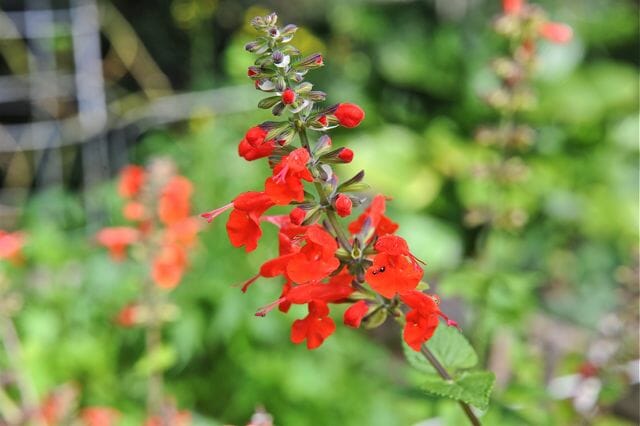 The smallest of the three red sages I grow is a variety of the Texas sage, Salvia coccinea ‘Lady in Red,’ just a couple of feet tall with hot red blooms. You can grown this one from seed, though I just pick up a few plants at the nursery and tuck them in one end of a raised vegetable bed. Nothing like being dive-bombed by hummingbirds while weeding and watering.

Any favorite salvias–and any still in bloom for you?

Categoriesannuals & perennials bird sh-t Nature
Radio Podcasts
a way to garden podcast
Margaret's weekly public-radio show, from Robin Hood Radio in Sharon, CT, the smallest NPR station in the nation. Listen live at 8:30 AM EDT Mondays, to the replay Saturday morning, or stream the podcast anytime. LISTEN OR SUBSCRIBE FREE: Get the iTunes version; find it on the Stitcher app; or on Spotify, or your favorite podcast app. Browse past interviews below.
Podcast Archive

ISMILE AND NOD WHEN GARDENERS FROM ELSEWHERE tout pineapple sage (Salvia elegans) as a hummingbird plant. “Elsewhere,” as in wherever the plant blooms before the..
Read More
d
February 10, 2014
21 Comments

IN THE MOOD for something aromatic, hot-colored, and abuzz with insect pollinators, butterflies and hummingbirds? With the help of High Country Gardens’ founder David Salman,..
Read More
i
September 2, 2008
46 Comments

WE’RE IN THE WANING WEEKS OF DIVE-BOMB SEASON at A Way to Garden. The ruby-throated hummingbirds are in a nearly final frenzy of aerial displays,..
Read More