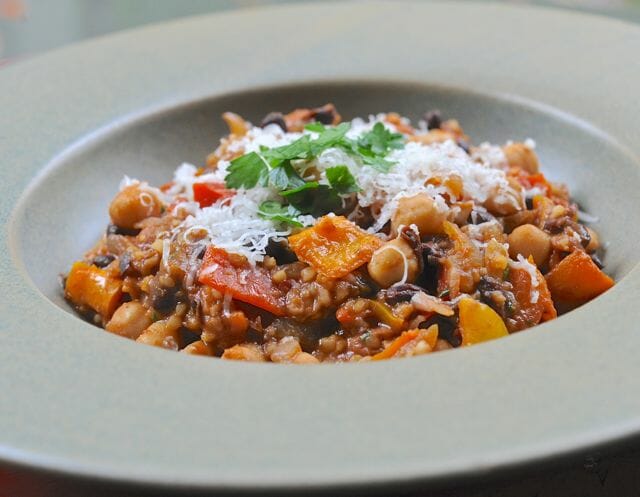 VEGETABLES WILL WANT ‘IN’ SOON—into the kitchen, then into the freezer in sauces and soups and pestos and such. But my freezers are still pretty well-stocked; it’s time to anticipate coming harvests, and make room. The first space-creating step: “Chili,” I said to garden helper and friend Susan during a recent monsoon that curtailed outdoor chores. “Let’s make chili.” Into the pot went bags of frozen whole paste tomatoes, frozen peppers both hot and sweet—even frozen garlic cloves from the 2012 garden. Maybe you have some such leftover ingredients–or just want a vegetarian chili recipe for when your 2013 produce ripens?

Categoriesedible plants entrees freezing & canning recipes & cooking tomatoes vegetables
Radio Podcasts
a way to garden podcast
Margaret's weekly public-radio show, from Robin Hood Radio in Sharon, CT, the smallest NPR station in the nation. Listen live at 8:30 AM EDT Mondays, to the replay Saturday morning, or stream the podcast anytime. LISTEN OR SUBSCRIBE FREE: Get the iTunes version; find it on the Stitcher app; or on Spotify, or your favorite podcast app. Browse past interviews below.
Podcast Archive

INTERVIEWING COOKBOOK AUTHORS can be hazardous work, causing unexpected detours to the grocery store in search of something you just suddenly must have–and then into..
Read More
f
September 24, 2012
56 Comments

LIKE THE BEST RECIPES, it’s a hand-me-down, delivered in the best oral tradition: told to me over a meal, and recorded on a paper napkin...
Read More
w
November 29, 2019
45 Comments

THE RABBITS got the beans that year. The cold weather all that same “summer” got some of the tomatoes. But I got the winter squash,..
Read More