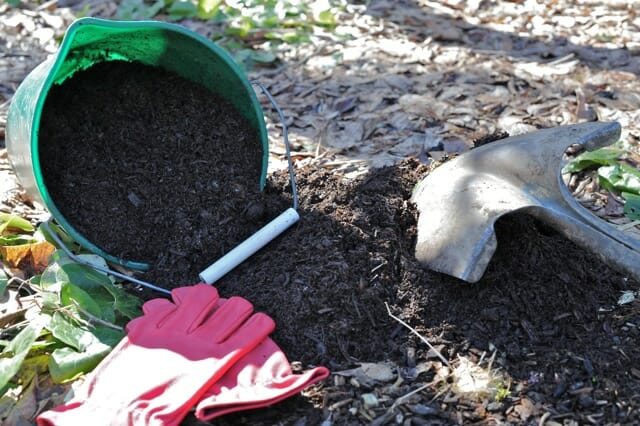 WITH HELP FROM THE LATE RUTH STOUT, I’m asking you to do two things this year: Use lots of good-quality mulch, and use no sprays or other chemicals. Get two nuggets of Stout’s 1961 wisdom from her book “Gardening Without Work,” and take the pledge.

Don’t know Ruth Stout? As I have written before: Long before phrases like “lasagna garden” were making the rounds of the as-yet-uninvented internet, Stout was layering all her organic materials (chopped up cornstalks, fallen leaves and such) on top of her Connecticut garden soil. The idea behind her sheet composting, as it might be called, was to thwart weeds, reduce the need for fertilizers, conserve moisture and spare herself the work of composting in a conventional heap with all the toting and turning of materials.

Her no-till approach rests on the foundational principle of applying mulch, mulch and more mulch, and then simply moving it back a tiny bit each year a bit to make room for a row of seeds or seedlings. (Less soil-turning equals fewer weed seeds exposed to light, and less soil damage by overworking.)

Stout used everything the garden or the trees nearby produced, combined with loads of “spoiled hay,” to mulch her garden. If that’s too funky a look for you in some areas, then compost every last scrap of organic matter first, top-dressing your beds with the finished material, and also create or locate a source of good-quality, aged mulch that will improve the soil beneath it (more on that in the bullets below; the top photo is the mulch I use–notably not giant bark chips that come in plastic bags).

On the other point of the 2014 pledge I’m proposing, I hope I don’t need to explain why I’d like you all to stop using chemicals—whether fertilizers, herbicides, pesticides or fungicides.

Frankly, I don’t even use “safe” sprays and other products approved for organic growing. I rely on a commitment to building healthy soil; practice good garden sanitation; encourage beneficial insects (more on that in the bullets below), and stay vigilant: checking key crops like cucurbits or brassicas daily, for instance, so I can stay ahead of any pest that might show up. I also accept that a little imperfection is natural; the arugula tastes just fine, even with the occasional flea-beetle hole.

Two of my favorite passages from Ruth Stout’s eccentric “Gardening Without Work: For the Aging, the Busy & the Indolent” (Amazon affiliate link) speak to the power of mulch, and the danger of chemicals.  Both give you a sense of her irrepressible tone:

‘I GET LETTERS complaining that mulch won’t kill cockleburs, morning glories, witch grass, vetch. I could add that neither will it plant your seeds nor harvest your crops: I am only saying in a sarcastic, friendly way that just because mulch does one hundred things for you, should it be expected to do one hundred and one?”

Can I count on each of you to count less on packaged “remedies” this year, if you still use any, and to count more on mulch to help your garden grow? 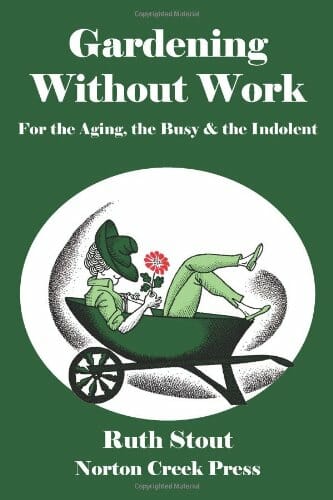 RUTH STOUT’S “Gardening Without Work” (Amazon affiliate link), originally published by Devon-Adair Company in 1961, was reissued in 2011 by North Creek Press. I’ve bought two extra copies to share with you.  All you have to do to enter to win is answer this question in the comments box below [NOTE: the giveaway is complete]:

What’s your mulching style and preferred material, and how’s it going with the packaged “remedies” over there (fertilizers, pesticides, weed killers)?

Me? As for mulch: I use chopped, aged leaves in my vegetable beds, and some straw or hay only if I can get it from an organic source. On my flower and shrub beds, I mulch with composted stable bedding (top-of-page photo) from an ethical local provider. As for “remedies,” I use a small amount of all-natural organic fertilizer, including concentrated seaweed and fish emulsion, and some lime on the lawn.

Feeling shy, or have no answer? Just say “count me in” or the equivalent, and I will. But I’d love to hear how you’re doing—and whether you can commit to gardening greener in the new year.

Two winners were picked at random after entries closed at midnight on Sunday, March 2, 2014.

Categoriescomposting for beginners garden prep organics weeds
Radio Podcasts
a way to garden podcast
Margaret's weekly public-radio show, from Robin Hood Radio in Sharon, CT, the smallest NPR station in the nation. Listen live at 8:30 AM EDT Mondays, to the replay Saturday morning, or stream the podcast anytime. LISTEN OR SUBSCRIBE FREE: Get the iTunes version; find it on the Stitcher app; or on Spotify, or your favorite podcast app. Browse past interviews below.
Podcast Archive

ASK MY FRIEND ANDREW: I will make the same resolution (to label all the plants in the garden) and then break it. My labeling-the-plants pronouncement..
Read More
m
March 16, 2019
88 Comments

HOW DO YOU GET your garden soil ready for growing things each spring? Do you till to prepare your beds, or double-dig them, or roughly..
Read More